The People's Chamber (German: Volkskammer) was the unicameral legislature of the German Democratic Republic (East Germany). From its founding in 1949 until the first free elections on 18 March 1990, all members of the Volkskammer were elected via a list controlled by the Socialist Unity Party of Germany (SED), called the National Front. Despite the appearance of a multi-party system, all these Bloc parties were completely subservient to the SED. In addition, seats were also allocated to various mass organizations affiliated with the SED, such as the Free German Youth.

Initially, it was the lower house of a bicameral legislature. The upper chamber was the Chamber of States, or Länderkammer, but in 1952 the states of East Germany were dissolved, and the chamber was abolished in 1958.

In theory, the Volkskammer was the highest organ of state power in the GDR. Both GDR constitutions vested it with great lawmaking powers. It also formally appointed the Council of State (after 1960), the Council of Ministers, and the National Defence Council. All other branches of government—including the judiciary—were theoretically responsible to it.

In practice, like most other legislatures in Communist countries, the People's Chamber did little more than rubber-stamp decisions already made by the SED and its Politburo. All parties were expected to respect the principles of democratic centralism and the leading role of the SED. As a result, all but two measures put before it before the Peaceful Revolution passed unanimously. A 1972 vote on liberalising abortion laws saw 14 CDU representatives vote nay and eight abstain, and the 1989 vote to confirm Egon Krenz as head of state saw 26 nays and 26 abstentions.

During People's Chamber elections, voters were presented with a single list from the National Front, with seats allocated based on a set quota rather than actual vote totals.[1] By ensuring that its candidates dominated the list, the SED effectively predetermined the composition of the legislature.

The "democratic centralist" principle extended to the ballot box as well. A voter simply took the ballot paper, which contained only one name, and dropped it into the ballot box. A voter could vote against the candidate by crossing out his or her name, but had to do so in a separate voting booth without any secrecy. The consequences for such an act of defiance were severe—loss of one's job or expulsion from school, and close surveillance by the Stasi.[2]

A typical slate was as follows:

In 1976, the Volkskammer moved into a specially-constructed building on Marx-Engels-Platz (now Schloßplatz again), the Palast der Republik (Palace of the Republic). 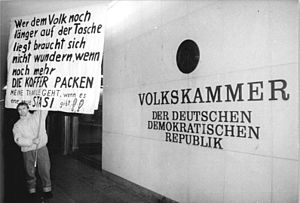 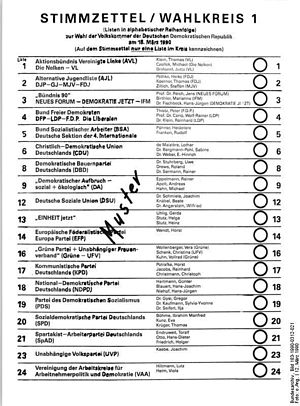 After the 1990 elections, the disposition of the parties was as follows:

Presidents of the People's Chamber

The last president of the People's Chamber, Sabine Bergmann-Pohl, was also interim head of state during the last six months of East Germany's existence due to the State Council having been abolished.