The People's State of Hesse (German: Volksstaat Hessen) was the name of the German state of Hesse-Darmstadt from 1918 until 1945.

After the end of World War I, the Grand Duchy of Hesse (German: Großherzogtum Hessen) became a republic and changed its name to the "People's State" (implying without monarchy rather than socialist). Its capital was Darmstadt. The state consisted of provinces Upper Hesse (German: Oberhessen, capital Gießen), Starkenburg (capital Darmstadt) and Rhenish Hesse (German: Rheinhessen, capital Mainz).

The area of the state was 7,692 km²; it had 1,347,279 inhabitants. Around two-thirds professed Protestantism, the other third Roman Catholicism.

In accordance with the Treaty of Versailles, approximately 40% of the state's territory (in particular, Rhine Hesse and part of Starkenburg) was occupied by the French Army until June 30, 1930.

After the end of World War II, Oberhessen and Starkenburg formed part of the American occupation zone, while Rhenish Hesse, on the left bank of the Rhine, fell within the French occupation zone. On September 19, 1945, American administrators created the new state of Greater Hesse (German: Groß-Hessen) from the Prussian provinces of Hesse and Nassau and from Frankfurt am Main. Greater Hesse was renamed Hesse on December 1, 1946, and later became one of the federal states of West Germany.

Parts of the state on the banks of the Rhine subsequently became part of the Rhineland-Palatinate (Rheinland-Pfalz) federal state. 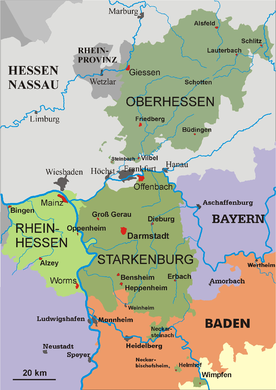 The provinces of the People's State in 1930: Oberhessen, Starkenburg and Rhenish Hesse (Rheinhessen).