Pepin I of Aquitaine 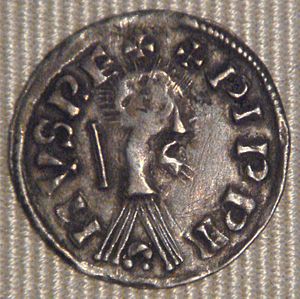 A Denier of Pepin I of Aquitaine (817–838). The inscription reads Pippinus rex.

Pepin was the second son of Emperor Louis the Pious and his first wife, Ermengarde of Hesbaye. When his father assigned to each of his sons a kingdom (within the Empire) in August 817, he received Aquitaine, which had been Louis's own subkingdom during his father Charlemagne's reign. Ermoldus Nigellus was his court poet and accompanied him on a campaign into Brittany in 824.

Pepin rebelled in 830 at the insistence of his brother Lothair's advisor Wala. He took an army of Gascons with him and marched all the way to Paris, with the support of the Neustrians. His father marched back from a campaign in Brittany all the way to Compiègne, where Pepin surrounded his forces and captured him. The rebellion, however, broke up.

In 832, Pepin rebelled again and his brother Louis the German soon followed. Louis the Pious was in Aquitaine to subdue any revolt, but was drawn off by the Bavarian insurrection of the younger Louis. Pepin took Limoges and other Imperial territories. The next year, Lothair joined the rebellion and, with the assistance of Ebbo, archbishop of Reims, the rebel sons deposed their father in 833. Lothair's later behaviour alienated Pepin, and the latter was at his father's side when Louis the Pious was reinstated on 1 March 834. Pepin was restored to his former status.

Pepin died scarcely four years later and was buried in the Church of St. Radegonde in Poitiers.

Both were minors when Pepin died, so Louis the Pious awarded Aquitaine to his own youngest son, Pepin's half-brother Charles the Bald. The Aquitainians, however, elected Pepin's son as Pepin II. His brother Charles also briefly claimed the kingdom. Both died childless.