From Infogalactic: the planetary knowledge core
Jump to: navigation, search
For the saint, see Saint Walpurga. 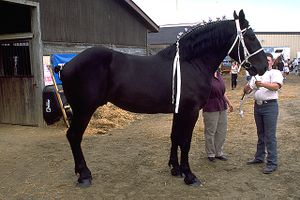 Perche (French pronunciation: ​[pɛʁʃ]) is a former province of northwestern France extending over the departments of Orne, Eure, Eure-et-Loir, Loir-et-Cher and Sarthe, which were created from Perche during the French Revolution.

The greater part of the district is occupied by a semicircle of heights (from 650 to 1000 ft. in height) stretching from Moulins-la-Marche on the northwest to Montmirail on the south; within the basin formed thereby the shape of which is defined by the Huisne, an affluent of the Sarthe, lie the chief towns of Mortagne-au-Perche, Nogent-le-Rotrou and Bellême. 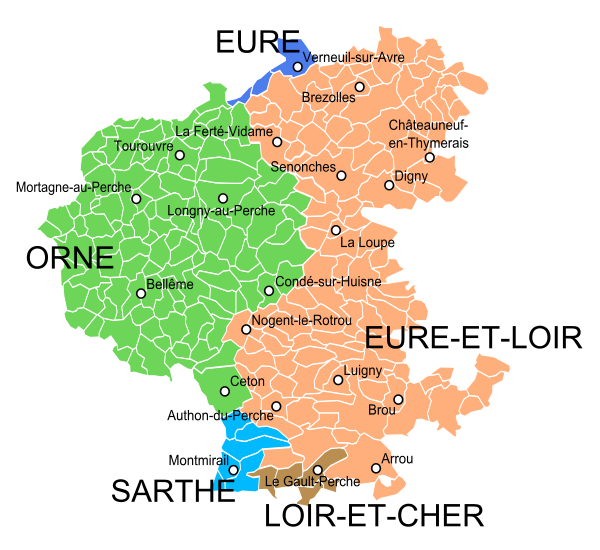 Coat of arms of Perche.

Stock-raising and dairy-farming are flourishing in the Perche, which is famous for the production of a breed of large and powerful horses, called Percherons. Cider-apples and pears are grown throughout the district.

In the Middle Ages, the Count of the Perche (Comté du Perche) governed the region between Normandy and Maine, of which Corbon, Mortagne and Nogent-le-Rotrou were successively the capitals. It was held by an independent line of counts until 1226. Geoffroy V, comte du Perche, would have been a leader of the Fourth Crusade had he not died before the assembled forces could depart.

The county then became a possession of the crown, which removed part of it to create the county of Alençon. After 1325, both counties were generally held by a member or members of a cadet line of the House of Valois. Upon the death without children of the last Duke of Alençon in 1525, the countship returned to the crown, and was granted only sporadically thereafter.

Under the ancient regime it formed, together with Maine, a government of which Mortagne was the capital. It had its own customary law "coûtume du Perche" until the French Revolution.

In the 17th century, a large number of immigrants to New France came from Perche. Many were recruited in the 1630s and 1650s to work for the Church missionaries and the nobles who were establishing estates on the St Lawrence River. While the total number of emigrants were few, Perche had a much higher rate of emigration to New France than most other regions of France. Nearly all French Canadians have some ancestors who came from the villages of Perche, which was called the Percheron Immigration.