Percival "Percy" Dearmer (27 February 1867 – 29 May 1936) was an English priest and liturgist best known as the author of The Parson's Handbook, a liturgical manual for Anglican clergy. A lifelong socialist, he was an early advocate of the public ministry of women (but not their ordination to the priesthood) and concerned with social justice. Dearmer also had a strong influence on the music of the church and, with Ralph Vaughan Williams and Martin Shaw, is credited with the revival and spread of traditional and medieval English musical forms.

Born in Kilburn, Middlesex, to an artistic family—his father, Thomas Dearmer, was an artist and drawing instructor. Dearmer attended Streatham School and Westminster School (1880 – 1881), before going to a boarding school in Switzerland. From 1886 to 1889 he studied modern history at Christ Church, Oxford, receiving his Bachelor of Arts degree in 1890.

Dearmer was made a deacon in 1891 and ordained to the priesthood in 1892 at Rochester Cathedral. On 26 May of that year, he married 19-year-old Jessie Mabel Prichard White (1872 – 1915), the daughter of Surgeon-Major William White. She was a writer (known as Mabel Dearmer) of novels and plays. She died in 1915 while serving with an ambulance unit in Serbia during World War I. They had two sons, both of whom served in World War I. The elder, Geoffrey, lived to the age of 103, one of the oldest surviving war poets. The younger, Christopher, died in 1915 of wounds received in battle.

The Parson's Handbook and incumbent at St Mary's 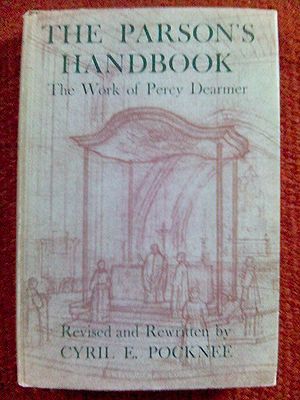 Dearmer's liturgical leanings were the product of a late Victorian debate among advocates of Ritualism in the Church of England. Although theoretically in agreement about a return to more Catholic forms of worship, high church clergy argued over whether these forms should be appropriated from post-Tridentine Roman Catholic practices or revived from the traditions of a pre-Reformation "English Use" rite. Dearmer's views fell very much on the side of the latter.

Active in the burgeoning Alcuin Club, Dearmer became the spokesman for a movement with the publication his most influential work, The Parson's Handbook. In this book his intention was to establish sound Anglo-Catholic liturgical practices in the native English tradition which were also in full accord with the rites and rubrics of the Book of Common Prayer and the canons that govern its use and, therefore, safe from attack by Evangelicals who opposed such practices. Such adherence to the letter was considered necessary in an environment in which conservatives such as John Kensit had been leading demonstrations, interruptions of services and legal battles against practices of Ritualism and sacerdotalism, both of which they saw as "popery".

The Parson's Handbook is concerned with general principles of ritual and ceremonial, but the emphasis is squarely on the side of art and beauty in worship. Dearmer states in the introduction that his goal is to help in "remedying the lamentable confusion, lawlessness, and vulgarity which are conspicuous in the Church at this time". What follows is an exhaustive delineation, sparing no detail, of the young priest's ideas on how liturgy can be conducted in a proper Catholic and English manner.

In 1901, after serving four curacies, Dearmer was appointed the third vicar of London church St Mary-the-Virgin, Primrose Hill, where he remained until 1915. He used the church as a sort of practical laboratory for the principles he had outlined, revising the book several times during his tenure.

In 1912 Dearmer was instrumental in founding the Warham Guild, a sort of practical arm of the Alcuin Club and Parson's Handbook movement, to carry out "the making of all the 'Ornaments of the Church and of the Ministers thereof' according to the standard of the Ornaments Rubric, and under fair conditions of labour".[citation needed] It is an indication of the founders' outlook, emphasis and commitment to the English Use that it was named for the last Archbishop of Canterbury before the break with Rome. Dearmer served as lifelong head of the Warham Guild's advisory committee.

Working with renowned composer Ralph Vaughan Williams and as musical editor, Dearmer published The English Hymnal in 1906. He again worked with Vaughan Williams and Martin Shaw to produce Songs of Praise (1926) and the Oxford Book of Carols (1928). These hymnals have been credited with reintroducing many elements of traditional and medieval English music into the Church of England, as well as carrying that influence well beyond the church.

In 1931 an enlarged edition of Songs of Praise was published. It is notable for the first appearance of the song "Morning Has Broken", commissioned from noted children's author Eleanor Farjeon. The song, later popularised by Cat Stevens, was written by Farjeon to be sung with the traditional Gaelic tune Bunessan. Songs of Praise also contained Dearmer's version of "A Great and Mighty Wonder" which mixed John Mason Neale's Greek translation and a translation of the German Es ist ein Ros entsprungen from which the music to the hymn had come in 1906.[1]

It has been claimed,[who?] that Dearmer was secretly consecrated as a bishop on 15 August 1894 by Frederick George Lee and John Thomas Seccombe of the Order of Corporate Reunion. From 1909 to 1914, he was a member of the committee of the Society of St Willibrord (founded in 1908 by the Revd George Barber to promote friendly relations between Anglican and Old Catholic churches and to prepare the way for full intercommunion between these churches).

For the fifteen years following his tenure as vicar at St Mary's, Dearmer served in no official ecclesiastical posts, preferring instead to focus on his writing, volunteerism and affecting social change. During World War I he served as a chaplain to the British Red Cross ambulance unit in Serbia, where his wife died of enteric fever in 1915. In 1916 he worked with the Young Men's Christian Association in France and, in 1916 and 1917, with the Mission of Help in India. Dearmer married his second wife, Nancy Knowles, on 19 August 1916. They had two daughters and a son, Antony, who died in RAF service in 1943.

From 1919 to his death in 1936, he was a lecturer in ecclesiastical art at King's College, London.

Politically, Dearmer was an avowed socialist, serving as secretary of the Christian Social Union from 1891 to 1912. He underscored these values by including a "Litany of Labour" in his 1930 manual for communicants, The Sanctuary. After being appointed a canon of Westminster Abbey in 1931 he ran a canteen for the unemployed out of it.

In addition to his writings, volunteer efforts and work with the church, Dearmer served as professor of ecclesiastical art at King's College London from 1919 until his sudden death of coronary thrombosis on 29 May 1936, aged sixty-nine. His ashes are interred in the Great Cloister at Westminster Abbey.

Works written or edited by Dearmer