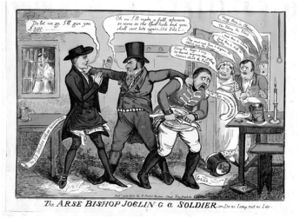 The Bishop of Clogher; caricature by Cruikshank

Percy Jocelyn (29 November 1764 – 3 September 1843) was Anglican Bishop of Clogher in the Church of Ireland from 1820 to 1822. He was forced from his position due to claims of homosexual practices, which were outlawed under the Buggery Act 1533.

The third son of Robert Jocelyn, first Earl of Roden, whose family estates were in Castlewellan, Co. Down, by his wife Lady Anne Hamilton, he graduated with a BA from Trinity College Dublin. At Trinity, he was regarded as something of a bookworm, spending much of his time in his rooms on Library Square. He was later described as "a tall thin young man with a pale, meagre and melancholy countenance, and so reserved in his manners and recluse in his habits that he was considered by every body to be both proud and unsociable".[1]

Two years later in 1811, Jocelyn's brother John's coachman, James Byrne, accused him of "taking indecent familiarities" (possibly buggery) and of "using indecent or obscene conversations with him". Byrne was sued for criminal libel by Jocelyn and on conviction was sentenced to two years in jail and also to public flogging. Recanting his allegations at the prompting of the bishop's agent, the floggings were stopped.[1] A public subscription was raised in 1822 to raise money for Byrne to try to make up for this miscarriage of justice.

On 19 July 1822, Percy Jocelyn was caught in a compromising position with a Grenadier Guardsman, John Moverley, in the back room of The White Lion public house, St Albans Place, off The Haymarket, Westminster. He and Moverley were released on bail, provided by the Earl of Roden and others. Jocelyn broke bail and moved to Scotland where he worked as a butler under an assumed name. He was declared deposed in his absence by the Metropolitan Court of Armagh in October 1822 for "the crimes of immorality, incontinence, Sodomitical practices, habits, and propensities, and neglect of his spiritual, judicial, and ministerial duties".

Jocelyn was the most senior British churchman to be involved in a public homosexual scandal in the 19th century. It became a subject of satire and popular ribaldry, resulting in more than a dozen illustrated satirical cartoons, pamphlets, and limericks, such as:

The Devil to prove the Church was a farce
Went out to fish for a Bugger.
He baited his hook with a Soldier's arse
And pulled up the Bishop of Clogher.

The scandal was so great, that in the days following, "it was not safe for a bishop to show himself in the streets of London", according to Charles Manners-Sutton, Archbishop of Canterbury at the time. In August 1822, Robert Stewart, Viscount Castlereagh, who was both the Foreign Secretary and Leader of the House of Commons, had an audience with King George IV where he said that he was being blackmailed, and that "I am accused of the same crime as the Bishop of Clogher." He committed suicide shortly afterwards, and was thought to have been in a paranoid state at the time.

Reports differ as to where Jocelyn is buried. It is assumed he died in anonymity in Edinburgh, buried under the assumed name Thomas Wilson, and the following inscription (in Latin): "Here lie the remains of a great sinner, saved by grace, whose hopes rest in the atoning sacrifice of the Lord Jesus Christ".

However some years ago, the Jocelyn family vault at Kilcoo Parish Church in Bryansford, County Down, Northern Ireland was opened and it was discovered that it contained one more coffin than the number of grave markers would indicate, and that the extra coffin was unmarked. This may well be the grave of the unfortunate Bishop of Clogher.

For 178 years afterwards the Church of Ireland refused to let historians see their papers on the affair. In the 1920s Archbishop D'Arcy of Armagh actually ordered that they be burnt. This command was not obeyed, and the files were finally released for Matthew Parris's research for his book The Great Unfrocked.