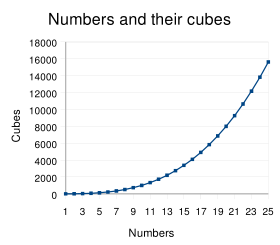 In arithmetic and algebra, the cube of a number n is its third power: the result of the number multiplied by itself twice:

It is also the number multiplied by its square:

This is also the volume formula for a geometric cube with sides of length n, giving rise to the name. The inverse operation of finding a number whose cube is n is called extracting the cube root of n. It determines the side of the cube of a given volume. It is also n raised to the one-third power.

Both cube and cube root are odd functions:

The cube of a number or any other mathematical expression is denoted by a superscript 3, for example 23 = 8 or (x + 1)3.

A cube number, or a perfect cube, or sometimes just a cube, is a number which is the cube of an integer. The perfect cubes up to 603 are (sequence A000578 in OEIS):

Geometrically speaking, a positive number m is a perfect cube if and only if one can arrange m solid unit cubes into a larger, solid cube. For example, 27 small cubes can be arranged into one larger one with the appearance of a Rubik's Cube, since 3 × 3 × 3 = 27.

The difference between the cubes of consecutive integers can be expressed as follows:

The last digits of each 3rd power are:

The sum of the first n cubes is the nth triangle number squared: 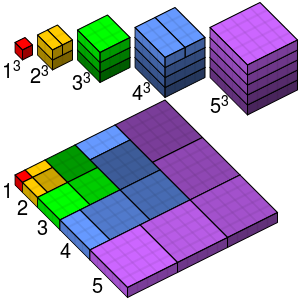 For example, the sum of the first 5 cubes is the square of the 5th triangular number,

A similar result can be given for the sum of the first y odd cubes,

and so on. Also, every even perfect number, except the lowest, is the sum of the first 2p−1/2
odd cubes,

Sum of cubes of numbers in arithmetic progression

There are examples of cubes of numbers in arithmetic progression whose sum is a cube:

with the first one also known as Plato's number. The formula F for finding the sum of n cubes of numbers in arithmetic progression with common difference d and initial cube a3,

A parametric solution to

In real numbers, other fields, and rings 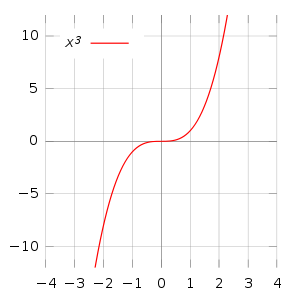 In real numbers, the cube function preserves the order: larger numbers have larger cubes. In other words, cubes (strictly) monotonically increase. Also, its codomain is the entire real line: the function x ↦ x3 : R → R is a surjection (takes all possible values). Only three numbers are equal to their own cubes: −1, 0, and 1. If −1 < x < 0 or 1 < x, then x3 > x. If x < −1 or 0 < x < 1, then x3 < x. All aforementioned properties pertain also to any higher odd power (x5, x7, …) of real numbers. Equalities and inequalities are also true in any ordered ring.

Volumes of similar Euclidean solids are related as cubes of their linear sizes.

The derivative of x3 equals 3x2.

Cubes occasionally have the surjective property in other fields, such as in Fp for such prime p that p ≠ 1 (mod 3),[6] but not necessarily: see the counterexample with rationals above. Also in F7 only three elements 0, ±1 are perfect cubes, of seven total. −1, 0, and 1 are perfect cubes anywhere and the only elements of a field equal to the own cubes: x3 − x = x(x − 1)(x + 1).

Determination of the cubes of large numbers was very common in many ancient civilizations. Mesopotamian mathematicians created cuneiform tablets with tables for calculating cubes and cube roots by the Old Babylonian period (20th to 16th centuries BC).[7][8] Cubic equations were known to the ancient Greek mathematician Diophantus.[9] Hero of Alexandria devised a method for calculating cube roots in the 1st century CE.[10] Methods for solving cubic equations and extracting cube roots appear in The Nine Chapters on the Mathematical Art, a Chinese mathematical text compiled around the 2nd century BCE and commented on by Liu Hui in the 3rd century CE.[11] The Indian mathematician Aryabhata wrote an explanation of cubes in his work Aryabhatiya. In 2010 Alberto Zanoni found a new algorithm[12] to compute the cube of a long integer in a certain range, faster than squaring-and-multiplying.