From Infogalactic: the planetary knowledge core
(Redirected from Perge)
Jump to: navigation, search 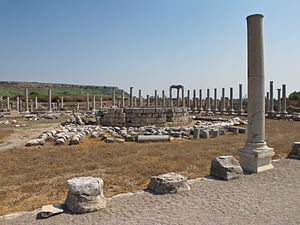 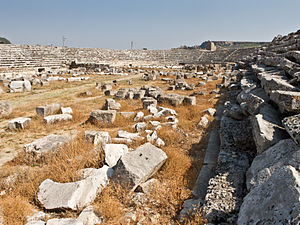 Perga or Perge (Greek: Πέργη Perge, Turkish: Perge) was an ancient Anatolian city in modern Turkey, once the capital of Pamphylia Secunda, now in Antalya province on the southwestern Mediterranean coast of Turkey. Today it is a large site of ancient ruins 15 kilometres (9.3 mi) east of Antalya on the coastal plain. Located there is an acropolis dating back to the Bronze Age.[1]

Perga was an ancient and important city of Pamphylia, between the rivers Catarrhactes and Cestrus.[2] It was renowned for the worship of Artemis, whose temple stood on a hill outside the town, and in whose honour annual festivals were celebrated.[3] The coins of Perge represent both the goddess and her temple. Alexander the Great occupied Perge with a part of his army after quitting Phaselis, between which two towns the road is described as long and difficult.[4]

Alexander's rule was followed by the Diadochi empire of the Seleucids.

In 46 A.D., according to the Acts of the Apostles, St. Paul journeyed to Perga, from there continued on to Antiocheia in Pisidia, then returned to Perga where he preached the word of God (Acts 14:25). Then he left the city and went to Attaleia.[5]

In the first half of the 4th century, during the reign of Constantine the Great (324-337), Perga became an important centre of Christianity, which soon became the official religion of the Roman Empire. The city retained its status as a Christian centre in the 5th and 6th centuries.

St. Paul the Apostle and his companion St. Barnabas, twice visited Perga as recorded in the biblical book, the Acts of the Apostles,[6] during their first missionary journey, where they "preached the word"[7] before heading for and sailing from Attalia (modern-day Antalya city), 15 kilometres (9.3 mi) to the southwest, to Antioch.

Paul and Barnabas came to Perge during their first missionary journey, but probably stayed there only a short time, and do not seem to have preached there;[8] it was there that John Mark left Paul to return to Jerusalem. On his return from Pisidia Paul preached at Perge.[9]

St. Matrona of Perge of the 6th century was a female saint known for temporarily cross-dressing to avoid her abusive husband.[10] She also is known for opposing the Monophysite policy of the emperor Anastasios I.[11] Matrona hid in the monastery of St. Bassion as the enuch Babylos. Once revealed, she was sent to a woman’s monastery where she was head of the convent. She was famous for her miraculous gift of healing. She went on to found a nunnery in Constantipole. St Matrona died at the age of 100. Her life was told through a vita prima whose author and exact time period remains a mystery.[12]

No longer a residential, the bishopric is included in the Catholic Church's list of titular sees.[14]

Perga is today an archaeological site and a tourist attraction. Ancient Perge, one of the chief cities of Pamphylia, was situated between the Rivers Catarrhactes (Düden Nehri) and Cestrus (Aksu), 60 stadia (about 11.1 kilometres (6.9 mi)) from the mouth of the latter; the site is in the modern Turkish village of Murtana on the Suridjik sou, a tributary of the Cestrus, formerly in the Ottoman vilayet of Konya. Its ruins include a theatre, a palaestra, a temple of Artemis and two churches. The temple of Artemis was located outside the town.

Another big ancient city in the area is Selge, Pisidia, located about 20km to the northeast.