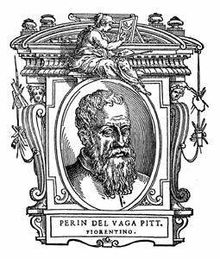 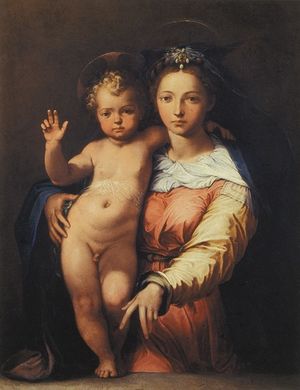 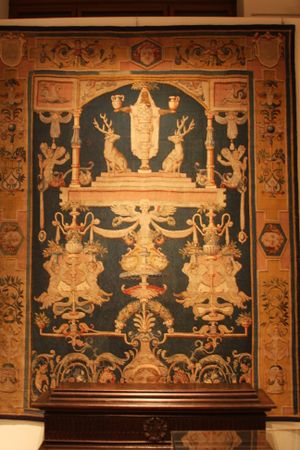 Perino (or Perin) del Vaga (nickname of Piero Bonaccorsi) (1501 – October 19, 1547) was an Italian painter of the Late Renaissance/Mannerism.

He was born near Florence. His father ruined himself by gambling, and became a soldier in the invading army of Charles VIII. His mother died when he was but two months old; but shortly afterwards he was taken up by his father's second wife. Perino was first apprenticed to a druggist, but soon passed into the hands of a mediocre painter, Andrea de' Ceri,[1] and when eleven years of age, of Ridolfo Ghirlandaio.

Perino was one of Ghirlandaio's most talented pupils. Another mediocre painter, Vaga from Toscanella, undertook to settle the boy in Rome. Perino, when he at last reached Rome, was utterly poor, and with no clear prospect beyond journey-work for trading decorators. He was eventually entrusted with some of the subordinate work undertaken by Raphael in the Vatican. He assisted Giovanni da Udine in the stucco and arabesque decorations of the Loggie Vaticane, and executed some of those small but finely composed scriptural subjects which go by the name of Raphael's Bible, Raphael himself furnishing the designs.

Perino's examples are: Abraham and Isaac, Jacob wrestling with the Angel, Joseph and his Brothers, the Hebrews crossing the Jordan, Fall and Capture of Jericho, Joshua commanding Sun to stand still, Birth of Christ, Baptism and the Last Supper. Some of these are in bronze-tint, while others are in full color. He also painted, after Raphael's drawings, figures of the planets in the great hall of the Appartamenti Borgia. Perino was soon regarded as his major assistant, second only to Giulio Romano.

To Raphael himself he was always exceedingly attentive. His solo works in the city include the hall of Palazzo Baldassini (1520–1522), a noble building in the center of the city, and the Pietà in the church of Santo Stefano del Cacco.

After Raphael's death in 1520 and the plague of 1523, a troubled period ensued for Perino. He returned to Florence, and befriended Rosso Fiorentino and executed an admirable design of 10,000 Martyrs (now lost).

In 1527 Andrea Doria invited Perino to Genoa to decorate the Palace of Fassolo, where he also executed numerous altarpieces and designs for tapestries. Perino accepted an invitation to Genoa, to help design decorate the newly rebuilt Palazzo del Principe for Andrea Doria. Fresco decoration began in 1529, starting with a now destroyed Quos Egos from the Aeneid. rapidly founded a quasi-Roman school of art in the Ligurian city. He ornamented the palace in a style similar to that of Giulio Romano in the Mantuan Palazzo Te, and frescoed historical and mythological subjects in the apartments, fanciful and graceful arabesque work with sculptural and architectural details. Among the principal works are: the War between the Gods and Giants, Horatius Cocles defending the Bridge, and the Fortitude of Mutius Scaevola. The most important work of all, the Shipwreck of Acneas, is no longer extant. From Genoa Perino twice visited Pisa, and began some painting in the cathedral.

A year later he returned to Rome and frescoed the Pucci Chapel in the Trinità dei Monti. Pope Paul III granted him a regular salary. He retouched many works of Raphael. He painted the decoration for the Paoline Chapel and other halls of Castel Sant'Angelo, some frescoes in the church of San Marcello, a monochrome in the Stanza della Segnatura in the Vatican and a cartoon of the Sistine Chapel.

Perino was engaged in the general decoration of the Sala Reale, begun by Paul III when he died on October 19, 1547, in Rome. He is buried in the Pantheon. His work in the Castel Sant'Angelo was continued by his student Pellegrino Tibaldi.

Del Vaga's style was renowned for his vitality and elegance. His paintings are considered important in the mediation between the Roman Raphaelesque tradition and the first Florentine Mannerism. He combined the manners of Raphael and Andrea del Sarto. Many of his works were engraved, even in his own lifetime. Daniele da Volterra, Girolamo Siciolante da Sermoneta, Luzio Romano and Marcello Venusti (also known as il Mantovano) were among his principal assistants.