The periphrastic forms are periphrastic by virtue of the appearance of more or most, and they therefore contain two words instead of just one. The words more and most contribute functional meaning only, just like the inflectional affixes -er and -est. The distinction is also evident across full verbs and the corresponding light verb constructions:

Distinctions of this sort abound across languages. The following table provides some examples across Latin and English:

Periphrasis is a characteristic of analytic languages, which tend to avoid inflection. Even strongly inflected synthetic languages sometimes make use of periphrasis to fill out an inflectional paradigm that is missing certain forms.[3] A comparison of some Latin forms of the verb dūcere 'lead' with their English translations illustrates further that English uses periphrasis in many instances where Latin uses inflection.

The correspondence in meaning across inflected forms and their periphrastic equivalents within the same language or across different languages leads to a basic question. Individual words are always constituents, but their periphrastic equivalents are often NOT constituents. Given this mismatch in syntactic form, one can pose the following questions: how should the form-meaning correspondence across periphrastic and non-periphrastic forms be understood?; how does it come to pass that a specific meaning bearing unit can be a constituent in one case but in another case, it is a combination of words that does not qualify as a constituent? An answer to this question that has recently come to light is expressed in terms of the catena unit, as implied above.[4] The periphrastic word combinations are catenae even when they are not constituents, and individual words are also catenae. The form-meaning correspondence is therefore consistent. A given inflected one-word catena corresponds to a periphrastic multiple-word catena.

The role of catenae for the theory of periphrasis is illustrated with the trees that follow. The first example is across French and English. Future tense/time in French is often constructed with an inflected form, whereas English typically employs a periphrastic form, e.g.

German often expresses a benefitor with a single dative case pronoun. For English to express the same meaning, it usually employs the periphrastic two-word prepositional phrase with for. The following trees illustrate the periphrasis of light verb constructions: 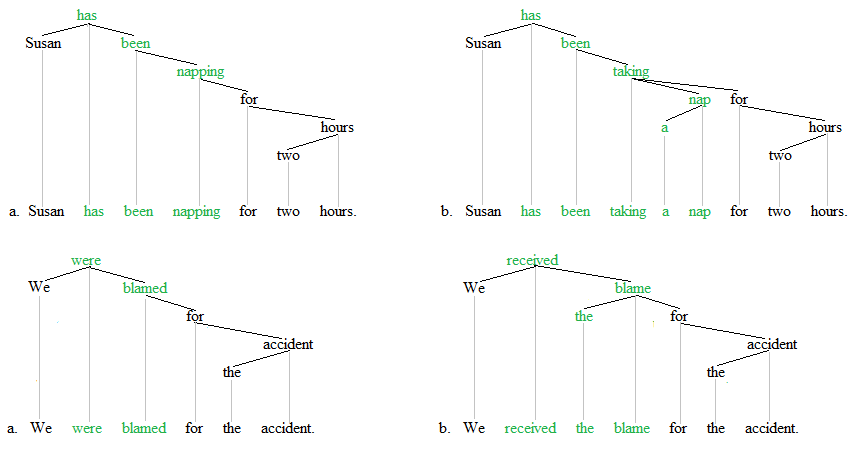