The permanent members of the United Nations Security Council.

The permanent members of the United Nations Security Council, also known as the Permanent Five, Big Five, or P5, include the following five governments: China, France, Russia, the United Kingdom, and the United States. The members represent the five great powers considered the victors of World War II.[1] Each of the permanent members has the power to veto, enabling them to prevent the adoption of any "substantive" draft Council resolution, regardless of the level of international support for the draft.

The original permanent members of the United Nations Security Council in 1945 (dark blue) with their respective colonies and other holdings shown (pale blue).

At the UN's founding in 1945, the five permanent members of the Security Council were the French Republic, the Republic of China, the United Kingdom, the United States, and the Soviet Union. There have been two seat changes since then, although not reflected in Article 23 of the United Nations Charter as it has not been accordingly amended: 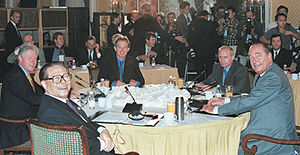 Additionally, France reformed its provisional government into the French Fourth Republic in 1946 and later into the French Fifth Republic in 1958, both under the leadership of Charles de Gaulle. France maintained its seat as there was no change in its international status or recognition, although many of its overseas possessions eventually became independent.

The five permanent members of the Security Council were the victorious powers in World War II and have maintained the world's most powerful military forces ever since. They annually top the list of countries with the highest military expenditures; in 2011, they spent over US$1 trillion combined on defense, accounting for over 60% of global military expenditures (the U.S. alone accounting for over 40%). They are also five of the world's six largest arms exporters, along with Germany[4] and are the only nations officially recognized as "nuclear-weapon states" under the Treaty on the Non-Proliferation of Nuclear Weapons (NPT), though there are other states known or believed to be in possession of nuclear weapons.

The "power of veto" refers to the veto power wielded solely by the permanent members, enabling them to prevent the adoption of any "substantive" draft Council resolution, regardless of the level of international support for the draft. The veto does not apply to procedural votes, which is significant in that the Security Council's permanent membership can vote against a "procedural" draft resolution, without necessarily blocking its adoption by the Council.

The G4 nations: Brazil, Germany, India, and Japan. Most support one another's bids for permanent seats on the Security Council, but are heavily opposed by various other member nations of the UN.[6]

There have been proposals suggesting the introduction of new permanent members. The candidates usually mentioned are Brazil, Germany, India, and Japan. They comprise the group of G4 nations, mutually supporting one another's bids for permanent seats. Britain, France and Russia support G4 membership in the UN Security Council.[7][not in citation given] This sort of reform has traditionally been opposed by the "Uniting for Consensus" group, which is composed primarily of nations who are regional rivals and economic competitors of the G4. The group is led by Italy and Spain (opposing Germany), Mexico, Colombia, and Argentina (opposing Brazil), Pakistan (opposing India), and South Korea (opposing Japan), in addition to Turkey, Indonesia and others. Since 1992, Italy and other members of the group have instead proposed semi-permanent seats or the expansion of the number of temporary seats.[8]

Most of the leading candidates for permanent membership are regularly elected onto the Security Council by their respective groups: Japan was elected for eleven two-year terms, Brazil for ten terms, and Germany for three terms. India has been elected to the council seven times in total, with the most recent successful bid being in 2010 after a gap of almost twenty years since 1991–92.

As of 2013, the current "P5" members of the Security Council, along with the G4, account for eight of the world's ten largest defense budgets, according to SIPRI.