Perryman's Buses[1] is a bus company based in Berwick-upon-Tweed. 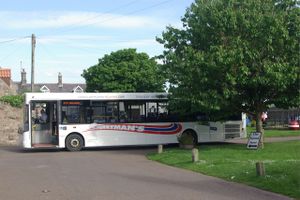 The company started as a taxi service in 1974, operating in the small village of Burnmouth in the Scottish Borders, before moving to new larger premises in Berwick-upon-Tweed in 2002. In 2013 a second depot was opened in St Boswells following the winning of a number of routes previously operated by Munro's of Jedburgh.[2][3]