Persian mythology are traditional tales and stories of ancient origin, all involving extraordinary or supernatural beings. Drawn from the legendary past of Iran, they reflect the attitudes of the society to which they first belonged - attitudes towards the confrontation of good and evil, the actions of the gods, yazats (lesser gods), and the exploits of heroes and fabulous creatures. Myths play a crucial part in Iranian culture and our understanding of them is increased when we consider them within the context of Iranian history.

For this purpose we must ignore modern political boundaries and look at historical developments in the Greater Iran, a vast area covering the Caucasus, Mesopotamia, Anatolia, and Central Asia, beyond the frontiers of present-day Iran. The geography of this region, with its high mountain ranges, plays a significant role in many of the mythological stories. The second millennium BC is usually regarded as the age of migration because of the emergence in western Iran of a new form of Iranian pottery, similar to earlier wares of north-eastern Iran, suggesting the arrival of the Ancient Iranian peoples. This pottery, light grey to black in colour, appeared around 1400 BC. It is called Early Grey Ware or Iron I, the latter name indicating the beginning of the Iron Age in this area.[1]

The central collection of Persian mythology is the Shahnameh of Ferdowsi, written over a thousand years ago. Ferdowsi's work draws heavily, with attribution, on the stories and characters of Mazdaism and Zoroastrianism, not only from the Avesta, but from later texts such as the Bundahishn and the Denkard as well as many others.

The characters of Persian mythology almost always fall into one of two camps. They are either good, or they are evil. The resultant discord mirrors the nationalistic ideals of the early Islamic era as well as the moral and ethical perceptions of the Zoroastrian period, in which the world was perceived to be locked in a battle between the destructive Ahriman and his hordes of demonic dews and their Un-Iranian supporters, versus the Creator Ormuzd, who although not participating in the day-to-day affairs of mankind, was represented in the world by the izads and the righteous ahlav Iranians. 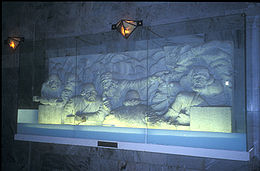 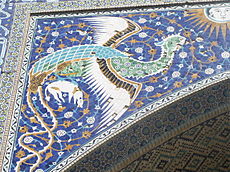 The most famous legendary character in the Persian epics and mythology is Rostam. On the other side of the fence is Zahhak, a symbol of despotism who was, finally, defeated by Kaveh the Blacksmith who led a popular uprising against him. Zahhak (Aži Dahāka) was guarded by two vipers which grew out from both of his shoulders. No matter how many times they were beheaded, new heads grew on them to guard him. The snake, like in many other mythologies, was a symbol of evil, but many other animals and birds appear in Iranian mythology, and, especially, the birds were signs of good omen. Most famous of these is Simorgh, a large beautiful and powerful bird; and Homa, a royal bird of victory whose plume adorned the crowns.

Peri (Avestan: Pairika), considered a beautiful though evil woman in early mythology, gradually became less evil and more beautiful, until the Islamic period she became a symbol of beauty similar to the houris of Paradise.[citation needed]