Persian traditional music is appreciated and enjoyed by people across Greater Persia/Iran. 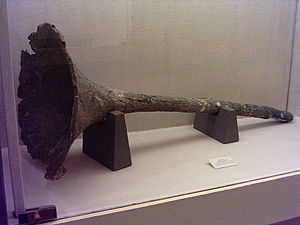 Karna, one of the ancient Persian musical instruments, 6th century BC, Persepolis Museum.

The history of musical development in Iran [Persia] dates back to the prehistoric era. King Jamshid, is credited with the "invention" of music. Fragmentary documents from various periods of the country's history establish that the ancient Persians possessed an elaborate musical culture.[1]

Archeological evidence reveals musical instruments that were used in Persia during the Elamit era around 800 BC. Little is known about the Persian music of the ancient world, least of all about the music of the Achaemenid Empire. Alexander the Great is said to have witnessed many melodies and instruments upon his invasion, and music played an important role in religious affairs. Music played an important role in the courts of the kings of the much later Sassanid Empire. Of this period, we know the names of various court musicians like Barbad and the types of various instruments that were used like harps, lutes, flutes, bagpipes and others. Under Sassanid rule, modal music was developed by a highly significant court musician, Barbad, called the khosravani. While today's classical music tradition in Persia bears the same names of some of the modes of that era it is impossible to know if they sound the same because there is no evidence of musical notation from the Sassanid period.

Today's traditional Persian music began to develop after the advent of Islam in Persia in the Medieval era, and the creation of today's formal, classical musical tradition is directly linked to the music systems in use under the Safavid dynasty. Under the later Qajar dynasty, the classical system was restructured into its present form mostly through the efforts of two legendary musicians of that time, Agha Hossein-Ghoul and Mara Abdullah. 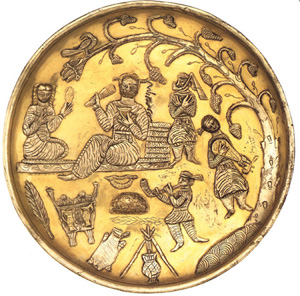 Persian traditional music relies on both improvisation and composition, and is based on a series of modal scales and tunes which must be memorized. Apprentices and masters, ostad, have a traditional relationship which has declined during the 20th century as music education moved to universities and conservatories.[citation needed] The common repertoire consists of more than two hundred short melodic movements called gusheh, which are classified into seven dastgāh or "modes." Two of these modes have secondary modes branching from them called āvāz. Each gusheh and dastgah has an individual name. This whole body is called the Radif of which there are several versions, each in accordance to the teachings of a particular master or ostad. A typical performance consists of the following elements pīshdarāmad(a rhythmic prelude which sets the mood), darāmad (rhythmic free motif), āvāz (improvised rhythmic-free singing), taṣnīf (rhythmic accompanied by singing, an ode), Chahārmeżrāb (rhythmic music but rhythmic-free or no singing), reng (closing rhythmic composition, a dance tune). A performance forms a sort of suite. Unconventionally, these parts may be varied or omitted. Towards the end of the Safavid Empire (1502-1736), more complex movements in 10, 14, and 16 beats stopped being performed. In fact, in the early stages of the Qajar Dynasty, the uṣūl(rhythmic cycles) were replaced by a meter based on the ghazal and the maqām system of classification was reconstructed into the Radif system which is used to this day (see Dast'gāh). Today, rhythmic pieces are performed in beats of 2 to 7 with some exceptions. Rengs are always in a 6/8 time frame. Many melodies and modes are related to the maqāmāt of the Turkish classical repertoire and Arabic music belonging to various Arab countries, for example Iraq. This similarity is because of the exchange of musical science that took place in the early Islamic world between Persia and her neighboring countries. During the meeting of The Inter-governmental Committee for the Safeguarding of the Intangible Heritage of the United Nations, held between 28 September – 2 October 2009 in Abu Dhabi, radifs were officially registered on the UNESCO List of the Intangible Cultural Heritage of Humanity.[2][3][4][5]

The music is vocal based. The vocalist plays a crucial role: she or he decides what mood to express and which dastgah relates to that mood. In many cases, the vocalist is also responsible for choosing the poems to be sung. If the performance requires a singer, the singer is accompanied by at least one wind or string instrument, and at least one type of percussion. There could be an ensemble of instruments, though the primary vocalist must maintain hers or his role. In some taṣnīf songs, the musicians may accompany the singer by singing along several verses. Traditionally, music is performed while seated on finely decorated cushions and rugs. Candles are sometimes lit. The group of musicians and the vocalist decide on which dastgahs and which of their gushehs to perform, depending on the mood of a certain time or situation.

Persian (Iranian) traditional music continues to function as a spiritual tool as it has throughout its history, and much less of a recreational activity. Compositions can vary immensely from start to finish, usually alternating between low, contemplative pieces and athletic displays of musicianship called tahrir. The incorporation of religious texts as lyrics were replaced by lyrics largely written by medieval Sufi poets, especially Hafez and Jalal-e Din Rumi. 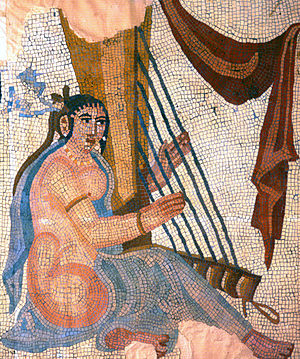 Instruments used in Persian music include the bowed spike-fiddle kamancheh, the goblet drum tombak, the end-blown flute ney, the frame drum daf, the long-necked lutes tar, setar, tanbur, dotar, and the dulcimer santur. The European violin is also used, with an alternative tuning preferred by Persian musicians. Harps, "chang[s]," were a very important part of music up until the middle of the Safavid Empire. They were probably replaced because of tuning problems or replaced by the qanun (zither) and later the piano which was introduced by the West during the Safavid Dynasty of Iran. Many, if not most, of these instruments originated in Iran. Perhaps the most loved string instrument is the tar. Tar players are regularly chosen to function as the primary string instrument in a performance. The setar is also loved for its delicacy and is the favorite among Mystic musicians. Some instruments like the sorna, neyanban, dohol, naghareh, and others, are not used in the classical repertoire but are used in Iranian Folk music. The ghazhak (ghaychak), a type of fiddle, is being re-introduced to the Classical field after many years of exclusion. The instruments used in the Classical field are also used in Iranian Folk Music.

The Persian Constitutional Revolution in 1906 allowed some release from previous religious restrictions with regards to music. As a result, genres such as pop and rock started to become popular. This popularity was criticized by traditionalists who felt that traditional music was becoming endangered. In 1968, Dariush Safvat and Nur-Ali Borumand helped form the Center for Preservation and Propagation of Iranian Music with the help of Reza Ghotbi, director of NIRT (National Iranian Radio-Television), an act credited with saving traditional music in the 1970s by other ethnomusicologists, including Nelly Caron, Tran Van Khe, and Hormoz Farhat.