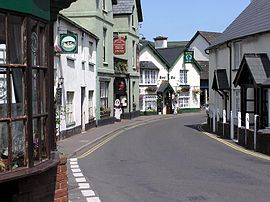 The Person from Porlock was an unwelcome visitor to Samuel Taylor Coleridge during his composition of the poem Kubla Khan in 1797. Coleridge claimed to have perceived the entire course of the poem in a dream (possibly an opium-induced haze), but was interrupted by this visitor from Porlock while in the process of writing it. Kubla Khan, only 54 lines long, was never completed. Thus "Person from Porlock", "Man from Porlock", or just "Porlock" are literary allusions to unwanted intruders who disrupt inspired creativity.

Coleridge was living at Nether Stowey (a village in the foothills of the Quantocks). It is unclear whether the interruption took place at Culbone Parsonage or at Ash Farm. He described the incident in his first publication of the poem:

On awakening he appeared to himself to have a distinct recollection of the whole, and taking his pen, ink, and paper, instantly and eagerly wrote down the lines that are here preserved. At this moment he was unfortunately called out by a person on business from Porlock, and detained by him above an hour, and on his return to his room, found, to his no small surprise and mortification, that though he still retained some vague and dim recollection of the general purport of the vision, yet, with the exception of some eight or ten scattered lines and images, all the rest had passed away like the images on the surface of a stream into which a stone has been cast, but, alas! without the after restoration of the latter!

English poet and essayist Thomas De Quincey speculated, in his own Confessions of an English Opium-Eater, that the mysterious figure was Coleridge's physician, Dr. P. Aaron Potter, who regularly supplied the poet with laudanum. This story is by no means universally accepted by scholars. It has been suggested by Elisabeth Schneider (in Coleridge, Opium and "Kubla Khan", University of Chicago Press, 1953) among others, that this prologue, as well as the Person from Porlock, was fictional and intended as a credible explanation of the poem's seemingly fragmentary state as published.[1] The poet Stevie Smith also suggested this view in one of her own poems, saying "the truth is I think, he was already stuck".[2]

If the Porlock interruption was a fiction, it would parallel the famous "letter from a friend" that interrupts Chapter XIII of Coleridge's Biographia Literaria just as he was beginning a hundred-page exposition of the nature of the imagination. It was admitted much later that the "friend" was the author himself. In that case, the invented letter solved the problem that Coleridge found little receptiveness for his philosophy in the England of that time.