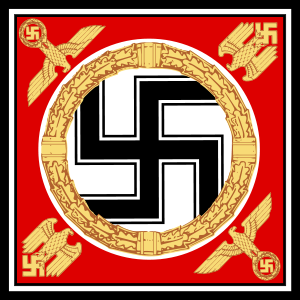 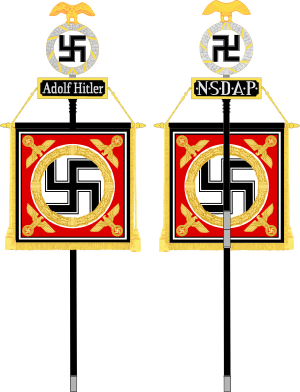 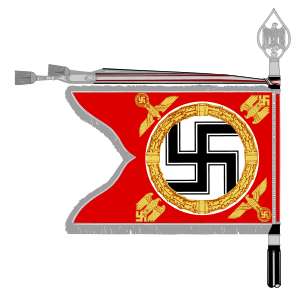 Standard of the "FBB" (reverse)

The standard was used for all purposes and consisted of a square of red material in a variety of regulated sizes. In the centre of the square was a white disk, containing a garland of gold-coloured oak-leaves. Set on the white disk was a black upright swastika. In each corner of the red field was a gold-coloured eagle emblem: In the upper left and lower right corner it was a "Party-eagle", whereas it was a "Wehrmacht-eagle" in the upper right and lower left corner. The entire standard was edged on all four sides with a border of black and white bands.

The flag was designed by Hitler personally. It was made in two forms: a normal cloth flag (which flew at the Reichs Chancellery when he was present), and a 'solid' type which was used on his car, at rallies, and other political events. Both types were also used at his residence at Obersalzberg.

The SS-formation Leibstandarte SS Adolf Hitler ("LSSAH") used a variant of the Führerstandarte as their regimental and battalion color that was introduced in September 1940 after the German victory over France.

Following the Soviet Capture of Berlin, the standards were taken to Moscow. At the Victory Parade of June 24th, 1945, soldiers of the elite "Division Named After Dzerzhinsky" ("Отдельной Дивизии Особого Назначения Внутренних Войск МВД СССР имени Дзержинского") threw the Führer standards along with other standards of Third Reich leaders and organizations at the foot of Lenin's Mausoleum in a gesture of enemy humiliation. The standards are kept in Moscow away from public view.

There was a Regiment standard of the "LSSAH" that displayed the "Führerstandarte" on its obverse and reverse, as well as a standard for the "Führer Escort Battalion", a unit of the army. The latter standard had a great similarity to the guidon used by the LSSAH but could be distinguished, apart from other details, by the different color of the fringes: LSSAH used gold, while the FBB used silver.