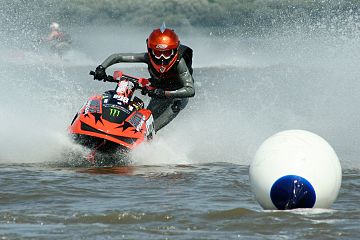 A personal water craft (PWC), also called water scooter, is a recreational watercraft that the rider sits or stands on, rather than inside of, as in a boat. PWCs have two style categories. The first and most popular being a "sit down", where the rider uses the watercraft mainly sitting down and typically holds two or more people. The second style is a "stand up", where the rider uses the watercraft standing up. The stand up styles are built for one rider and is used more for doing tricks, racing, and are used in competitions. Both styles have an inboard engine driving a pump jet that has a screw-shaped impeller to create thrust for propulsion and steering. They are often referred by the trademarked brand names Jet Ski, WaveRunner, or Sea-Doo.[citation needed] Most are designed for two or three people, though four-passenger models exist. The United States Coast Guard defines a personal watercraft, amongst other criteria, as a jet drive boat less than 13 feet (4 m) in length, in order to exclude from that definition more conventional sized jet boats.[1] There is a wide variety of "jet boats" many of which exceed 30–40 feet (9–12 m) in length. Companies such as UK based *DJR Ltd specialise in building high end luxury freestyle machines based on the Yamaha superjet combined with an aftermarket hull, such. Rickter jet skis are capable of performing the biggest tricks in the world when combined with an exceptional motor.

Water scooters - as they were originally termed - were first developed in the United Kingdom and Europe in the mid-1950s, with models such as the British 200cc propellor-driven Vincent Amanda, and the German Wave Roller.[2][3] Two thousand Vincent Amandas were exported to the United States, Europe, and Australasia.[4] In the 1960s, the idea was developed further by Clayton Jacobson II of Byron Bay, Australia. Originally a motocross enthusiast,[5][6][7] Jacobson's idea was designed in the mid-1960s, powered by an internal pump-jet rather than an outboard motor,[7] made of all aluminum, and had a fixed, upright handle. Jacobson eventually quit his job in banking to devote himself to developing the idea, and had a working prototype by 1965. It differed slightly from modern personal watercraft but had definite similarities. He completed a second prototype a year later made of fiberglass.[8]

The first Clayton-type PWC to reach the market was designed by Bombardier in the late 1960s.[9] Bombardier's original designs were not very popular and Bombardier left the business before 1970. Stand-up PWCs first appeared on the US market in 1973 and were produced by Kawasaki. These were mass-produced boats to be used by only one rider. While they are still produced today, the more popular design, is the sit down variety of PWC. These sit down models have been produced by Kawasaki (Jetski), Bombardier (Sea Doo), Yamaha (WaveRunner), Honda (AquaTrax), Polaris (Sealion) and Arctic Cat (Tigershark). As of 2010, the major manufacturers of PWCs were Kawasaki, Bombardier and Yamaha. Both Yamaha and Kawasaki continue to sell stand up models but it is a small percentage of the overall market.

PWCs are small, fast, easily handled, fairly easy to use, affordable, and their propulsion systems do not have external propellers, making them safer for swimmers and wildlife. For these reasons, they are preferred for non-recreational use over small motorboats.

PWC's are used for Jet Ski fishing or PWC fishing and is the fastest growing segments in the industry. They are fast, safe and economical and are being chosen over traditional boats.

Lifeguards use PWCs equipped with rescue platforms to rescue water users who get into difficulties and carry them back to shore. Rescuers use PWCs to pick up flood survivors.

PWCs are used for law enforcement. Due to their speed and excellent maneuverability, police and rangers use them to enforce laws on lakes and rivers.[citation needed]

A PWC combined with a wash-reduction system, carrying waterproof loudspeaker equipment and GPS for instructions and distance measurement, has purportedly[citation needed] been used by assistant coaches for rowing sports on the River Tyne.

PWCs are used by the U.S. Navy as surface targets.[citation needed] Equipped with GPS, electronic compass, radar reflector, and a radio modem, the PWC is fully remotable with a two-way link. Its small shipboard footprint allows it to be stored and deployed from the smallest of vessels, and it has been used for target practice for everything from 5" to small arms.[citation needed]

PWCs are banned from many state parks throughout the U.S. including Kachemak Bay State Park in Alaska.

Further information: Non-road engine § Emission standards
File:Yamaha SUV.jpg
Some personal watercraft carry as many as four passengers, contain up to 300 horsepower (220 kW) engines, reach speeds of up to 70 miles per hour (110 km/h), carry 25 US gallons (95 l) of fuel, and feature amenities such as sun pads and extra padded cruising seats.

The American PWC industry reached an agreement with the United States Coast Guard in 1999 (see fall, 1999 BSAC Minutes), agreeing to limit the speed of a PWC to 65 mph in a specified test protocol.

Before 1991, PWC emissions were unregulated in the United States. Many were powered by two-stroke cycle engines, which are smaller and lighter than four-stroke cycle engines but more polluting. Simple two-stroke engines are lubricated on a "total loss" method, mixing lubricating oil with their fuel; they are estimated to create exhaust in excess of 25% of their fuel and oil unburned in addition to the products of incomplete and complete combustion.

The 1990 amendments to the Clean Air Act allowed the U.S. Environmental Protection Agency to begin regulating all recreational marine engines including PWC, as well as other off-road internal combustion engines. The agency began a dialogue with manufacturers in 1991, resulting in regulations that were enacted in 1996. These regulations, set to phase in between 1998 and 2006, are considered averaging standards, because they allow manufacturers to offset more-polluting engines in their product range by offering other engines that exceed the standard. California and subsequently New York have, in turn, adopted more stringent regulations than the federal standard. Subsequent to 2004 when the maximum emission reductions required by California became effective, the substantial majority of new PWC units sold throughout the United States have met the lower emissions standards established by California.

File:Sea Doo LRV.JPG
Even the largest PWC, the Sea-Doo LRV, can be easily loaded onto a trailer and transported from one body of water to another.

To meet these regulations, manufacturers have adopted a variety of improvements, including increased use of four-stroke engines, the use of direct injection for two-strokes, and the use of catalytic converters and other pollution-curbing measures that overall have reduced emissions by approximately 75% compared to pre-regulation models.

In some areas, such as Lake Tahoe, All outboard motors and PWCs are permitted if they meet the 2006 EPA regulations. A number of pre-2006 model year PWC meet that EPA standard.

Environmental groups such as the Surfrider Foundation and the Bluewater Network claim that more rapid progress could be made, and that the dimishing numbers of pre-1998 watercraft in use continue to emit substantial pollution.

Against this, industry groups such as the Personal Watercraft Industry Association point out that environmental groups continue to cite pollution levels of pre-regulation watercraft and ignore the improvements made to newer models; and furthermore, that personal watercraft are unfairly singled out when they are no more polluting than other powered boats.

Apart from the obvious hazards of collisions and mechanical breakdowns common to all vehicles, operating or riding a PWC can involve a risk of orifice injuries.[10][11][12] These injuries are typical of the kinds of injuries that waterskiers experience as a result of falling into the water at speed.[13] Such injuries can occur from simply falling in the water at speed or they can occur from the output end of the pump jet. A rider who falls (or is ejected) off the back can land directly in the path of the PWC's high-pressure jet of water. Unless a rider is appropriately dressed in garments made out of a strong, thick substance like neoprene (as is commonly found in wetsuits), the jet may penetrate any orifice it reaches. All major PWC manufacturers warn about this risk and recommend that passengers wear wet suit bottoms or equivalent protection. The American Waterski Racing Association recommends that all of their racers wear wet suit bottoms for this same reason.

Such orifice injuries can result in permanent disability or death.[14][15] For example, in 2006, the California Court of Appeal for the First Appellate District upheld a $3.7 million Napa County jury verdict against Polaris Industries arising out of one such incident (which had devastating effects on the victim's lower abdomen).[16] It is also possible for multiple riders on the same PWC to sustain orifice injuries in a single accident, as actually occurred in a 2007 accident at Mission Bay which resulted in a San Diego County jury verdict affirmed in full on appeal in 2014.[17]

While also rare, spinal injuries can occur while surf jumping and, potentially, wake jumping.[18] The PWC manufacturers owner's manuals all include warnings regarding jumping at excessive heights, or operating a PWC if there is a prior history of back injury. The current on-product labels say "Jumping wakes or waves can increase the risk of spinal/backbone injuries (paralysis)".[19] The current Kawasaki owner's manual provides: "Slow down before crossing waves. Do not ride if you have a back condition. High speed operation in choppy or rough water may cause back injuries."[20]

Another rare, but unique injury risk with jet boats, is being sucked into the intake side of the pump jet. Current PWC products contain on-product warnings that state: "Keep away from Intake Grate while the engine is on. Items such as long hair, loose clothing, or PFD straps can become entangled in moving parts and result in severe injury or drowning".[21]