From Infogalactic: the planetary knowledge core
Jump to: navigation, search
This article is about the Scottish local government area. For the former UK Parliamentary constituency abolished in 1997, see Perth and Kinross (UK Parliament constituency). 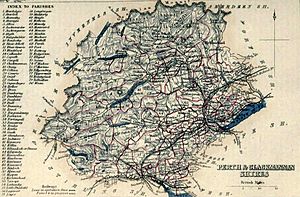 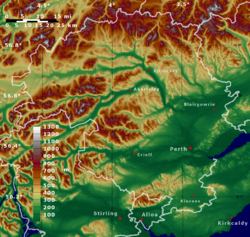 Topographic map of Perth and Kinross

Perth and Kinross (Scots: Pairth an Kinrosscode: sco is deprecated , Scottish Gaelic: Peairt agus Ceann Rois) is one of the 32 council areas of Scotland and a Lieutenancy Area. It borders onto the Aberdeenshire, Angus, Argyll and Bute, Clackmannanshire, Dundee, Fife, Highland and the Stirling council areas. Perth is the administrative centre. It corresponds broadly, but not exactly, with the former counties of Perthshire and Kinross-shire.

On the 18th September 2014, Perth and Kinross like most council areas, voted "No" in the Scottish Independence Referendum at 60% with a 86.9% turnout rate.[1]