From Infogalactic: the planetary knowledge core
Jump to: navigation, search
This article is about the city Pescara. For the provincia di Pescara, see Province of Pescara. For the Pescara River, see Aterno-Pescara.

listen (help·info) is the capital city of the Province of Pescara, in the Abruzzo region of Italy. As of 1 January 2007 it was the most populated city within Abruzzo at 123,059 residents, approximately 450,000 including the surrounding metropolitan area. Located on the Adriatic coast at the mouth of the Aterno-Pescara River, the present-day municipality was formed in 1927 joining the municipalities of Pescara, the part of the city to the south of the river, and Castellamare Adriatico, the part of the city to the north of the river. The surrounding area was formed into the province of Pescara. The poet Gabriele D'Annunzio, a native of Pescara, was a major sponsor for the creation of the new city.

The main commercial street of the city is Corso Umberto I, which runs from Piazza della Republica and reaches the seacoast at Piazza Primo Maggio. The rectangle that it forms with Corso Vittorio Emanuele II and Via Nicola Fabrizi encloses the main shopping district, where several of the best fashion shops are located. Corso Manthonè, the course of the old Pescara has, for many years, been the center of the nightlife of the city. City hall and the administration of the province are in Piazza Italia, near the river, and in the area between here and the faculties of Economics, Architecture, Foreign Languages and Literature of G. d'Annunzio University to the south, a business district has grown up over the years. To the immediate south of the mouth of the river is the marina. Pescara has also an important international airport, called Abruzzo Airport and one of the most important and major touristic ports of Adriatic Sea and Italy, the Port of Pescara.

Pescara is situated at sea level on the Adriatic coast and has developed from some centuries BC onwards at the strategic position around the mouth of the Aterno-Pescara River. The coast is low and sandy and the beach extends, unbroken for some distance to both the north and the south of the river, reaching a width of approximately 140 metres (150 yd) in the area around Pineta to the north. To the south the pine forest that once gave shade to bathers along much of the Adriatic coast, has almost disappeared near the beach, but remains within the Pineta Dannunziana Provincial Nature Reserve.

The urban fabric of the city spreads over a flat T-shaped area, which occupies the valley around the river and the coastal strip. To the northwest and the southwest, the city is also expanding into the surrounding hills which were first occupied in the Neolithic period.

The whole city is affected by the presence of groundwater, the level of which varies by up to a metre, being at its highest in spring due to snow melting in the mountains inland.

Pescara has a borderline Mediterranean climate (Csa) and humid subtropical climate (Cfa) with hot summers and cool winters. Since it has only one summer month with less than 40 millimetres (1.6 in) of rainfall, the city cannot be solely classified as Mediterranean. Not to mention, although there is a dry tendency in early summer, August (late summer) is wetter than the winter month of February, which is unusual for the Mediterranean pattern.[1][2]

Pescara is a coastal city, but its climate is influenced by the surrounding mountains (the Maiella and the chain of Gran Sasso). When the wind is southwesterly, Pescara experiences a Foehn wind that often reaches 100 km/h (62 mph), causing a sudden increase in temperature and decrease in relative humidity, and for that reason winters with temperatures that exceed 20 °C (68 °F) almost daily are not unknown.

Under northeasterly winds Pescara suffers precipitation which is generally weak, but can be much more intense if accompanied by a depression. Also from the north east comes winter weather from Siberia that, on average, brings abundant snowfalls every 3–4 years. In summer the weather is mostly stable and sunny with temperatures that, thanks to the sea breeze, rarely exceed 35 degrees unless a southwesterly Libeccio is blowing. Particularly in summer, but also in winter, the high humidity leads to morning and evening mist or haze.

Even without a significant historical importance, Pescara's origins precede the Roman conquest. It was founded to be the port of Theate, Capital of the people of Marrucini, to trade with the peoples of the Orient, a supporting role that was held for centuries. The name of both the town and the river was Aternum (in Greek Άτερνος), it was connected to Rome through the Via Claudia Valeria and the Via Tiburtina. The main building was the temple of Jovis Aternium. The town was an important port for trade with the Eastern provinces of the Empire.

In the Middle Ages it was destroyed by the Lombards (597). Saint Cetteus, the town's patron saint, was a bishop of the 6th century, elected to the see of Amiternum in Sabina (today the city of San Vittorino) in 590, during the pontificate of Gregory the Great.[4] His legend goes that he was executed by the Lombards at Amiternum by being thrown off a bridge with a stone tied around his neck; his body floated to Pescara.[4]

In 1095 Pescara was a fishing village enriched with monuments and churches. In 1140 Roger of Sicily conquered the town, giving rise to a period in which it was destroyed by armies ravaging the Kingdom of Sicily. The name of Piscaria ("abounding with fish") is mentioned for the first time in this period. Several seignors ruled over Pescara afterwards, including Rainaldo Orsini, Louis of Savoy and Francesco del Borgo, the vicar of king Ladislaus of Naples, who had the fortress and the tower built. 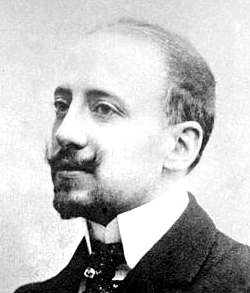 The subsequent rulers were the D'Avalos. In 1424 the famous condottiero Muzio Attendolo died here. Another adventurer, Jacopo Caldora, conquered the town in 1435 and 1439. In the following years Pescara was repeatedly attacked by the Venetians, and later, as part of the Spanish Kingdom of Naples, it was turned into a massive fortress.

In 1566 it was besieged by 105 Turk galleys. It resisted fiercely and the Ottomans only managed to ravage the surrounding territory.

At the beginning of the 18th century Pescara had some 3,000 inhabitants, half of them living in the Castellammare. In 1707 it was attacked by Austrian troops under the command of the Duke of Wallis: the town, led by Giovanni Girolamo II Acquaviva, resisted for two months before capitulating.

Pescara was always part of the Kingdom of Naples, apart from the brief age of the Republic of Naples of 1798–99. The town was therefore attacked by the pro-Bourbon Giuseppe Pronio. In 1800 Pescara fell to French troops, becoming an important military stronghold of Joseph Bonaparte's reign. Castellammare, which now had 3,000 inhabitants of its own, became a separate municipality.

In 1814, Pescara's Carboneria revolted against Joachim Murat. There, on 15 May 1815, the king undersigned one of the first constitutions of the Italian Risorgimento. In the following years Pescara became a symbol of the Bourbon's violent restoration as it housed one of the most notorious Bourbon jails. After a devastating flood in 1853, Pescara was liberated by Giuseppe Garibaldi's collaborator Clemente De Caesaris in 1860. Seven years later the fortress was dismantled.

In the sixty following years Pescara was included in the Province of Chieti and then merged with the adjacent town of Castellammare degli Abruzzi and eventually became the largest city of its region. The new city received a hard blow[5] during World War II and has since been massively rebuilt, becoming a very modern coastal city of Italy. 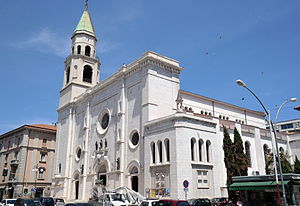 One of the most popular sights is the birthplace house of Gabriele D'Annunzio.[6]

Pescara also houses the Museum of the Abruzzi people:[7] the institution traces, towards 13 halls dedicated to the aspects of life, traditions and economy, 4,000 years of history of the Abruzzo people. 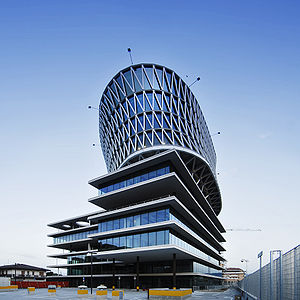 Pescara is the most populous city in the Abruzzo region, and is one of the top ten economic, commercial, and tourist centers on the Adriatic coast. Featuring a shoreline that extends for more than 20 km (12 mi), Pescara is a popular seaside resort on the Adriatic coast during summer. Situated in the sea at a short distance from the waterline there are many breakwaters made with large rocks, that were placed to preserve the shore from water-flood erosion.

Pescara was the birthplace of Gabriele D'Annunzio and Ennio Flaiano. Vittoria Colonna was the marchioness of Pescara.

Pescara and Chieti are the homes of the G. d'Annunzio University. Pescara is home to the Departments of Architecture, Economics, Business Administration, Quantitative Economics, Social and Legal Sciences, Modern Languages Literatures and Cultures, as Chieti, together with the Rector and Academic Senate, is home to the Departments of Medicine and Science of Aging, Experimental and Clinical Sciences, Neuroscience and Imaging, Oral Health Sciences and Biotechnology, Pharmacy, Humanities,Arts and Social Sciences, Humanities Psychological Sciences, Engineering and Geology for a total of about 31,257 students in the 2011 [1].

Since 2009, Rome ISIA has a subsidiary in Pescara, training students in the field of industrial design.

As regards public transport Pescara has a wide assortment of services, the city benefits from it a very favourable position with regard to roads.

The territory between Pescara and Chieti is crossed by two pan-European roads, autostrada A14 (Italy) Bologna - Taranto and autostrada A25 (Italy) Torano - Pescara. 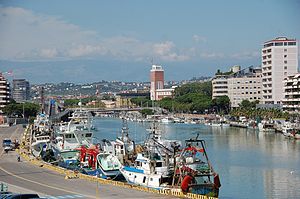 Port of Pescara and Comunal Palace

Pescara is served by the Port of Pescara for fishing, yachting, cargo docking and commercial passenger services. In summer season ferries and hydrofoils to Croatia run primarily by SNAV to Split and islands in central Dalmatia, but often they set out from the larger and better equipped Port of Ortona.

The city has four railway stations, Pescara Centrale railway station is the main and largest in Abruzzo, as well as one of the larger railway stations without train terminal in Italy, connecting with some of the major Italian cities like Rome, Milan, Turin, Bologna, Bari, Ancona, Trieste and many other cities. The other stations are Pescara Porta Nuova, Pescara Tribunale and Pescara San Marco.

Pescara is served from several bus lines (operated by GTM, Gestioni Trasporti Metropolitani) and Arpa (Autolinee regionali pubbliche abruzzesi). There is a direct bus line to Roma Tiburtina (Rome) via Pescara Centrale (about a two and a half hour ride).

A trolleybus automatic steering system line connecting the city center with its strategic points like Pescara Centrale railway station and the Abruzzo International Airport and other nearby cities is being built.

The city has a football team, Pescara Calcio 1936, which in June 2012 was promoted to Serie A, the highest league in Italy. Pescara Calcio, who have played 30 seasons in the cadet championship, have spent five previous seasons in Serie A, especially in the 1980s-1990s years.

Pescara won the XVI Mediterranean Games in 2009, having defeated Rijeka, Croatia and Patras, Greece for the privilege.

Between 1924 and 1961, Pescara hosted the Coppa Acerbo automobile race, which in 1957 formed the penultimate round of the Formula One World Championship.

Pescara is a twin city with: