Asher was born at the Central Middlesex Hospital. When he was eight years old, he began working as a child actor, and appeared in the film The Planter's Wife, and the stage play Isn't Life Wonderful. At the age of ten, Peter played the appealing central juvenile part in the 1954 film version of Isn't Life Wonderful, along with stars Cecil Parker and Donald Wolfitt. He also appeared in the ITV series, The Adventures of Robin Hood. He is a member of Mensa.[2] While attending the independent Westminster School as a day boy, he first met fellow pupil Gordon Waller (1945–2009), and they began playing and singing together as a duo in coffee bars. In 1962, they began working formally as Peter and Gordon. Their first (and biggest) hit was the 1964 Paul McCartney song "A World Without Love."

Asher later read philosophy at King's College London.[3] Asher is the son of Dr Richard Asher and Margaret Eliot, and the older brother of actress and businesswoman, Jane Asher, and radio actress, Clare Asher. Jane Asher was, in the mid-1960s, the girlfriend of Paul McCartney. Through this connection, Asher and Waller were often given unrecorded Lennon-McCartney songs to perform.[4]

In 1965, he was best man when singer Marianne Faithfull married John Dunbar in Cambridge.[5]

After Peter and Gordon disbanded in 1968, Asher took charge of the A&R department at the Beatles' Apple Records label, where he signed a then-unknown James Taylor and agreed to produce the singer-songwriter's debut solo album. The album was not a success, but Asher was so convinced that Taylor held great potential that he resigned his post at Apple to move to the United States and work as Taylor's manager. Asher produced Paul Jones' rendition of the Bee Gees' "And the Sun Will Shine" which was released as a single (only in the UK).[6] He also produced a number of Taylor's recordings from 1970 to 1985, including Sweet Baby James, Mud Slide Slim and the Blue Horizon, JT and Flag.

In 1969, Asher was asked by George Harrison to look up an American band called Raven while he was in New York City (The Longest Cocktail Party, p. 119). He offered Raven an Apple Records recording contract in the kitchen of Steve Paul's Scene but the group turned it down and instead signed with Columbia Records.[7]

In the early 1970s Asher also managed the country rock band, Country, which recorded for Atlantic Records through its subsidiary Clean Records, featuring Michael Fondiler and Tom Snow, who has since become a songwriter. For a time, Asher also managed James Taylor's sister Kate Taylor. When she decided to leave the business, she recommended him to Linda Ronstadt at which point Asher became Ronstadt's manager.[8] Asher achieved his greatest success producing a long string of multi-platinum albums for James Taylor, including Sweet Baby James, JT and Flag, and for Linda Ronstadt, including Heart Like a Wheel, Simple Dreams, Living in the USA, What's New, Canciones De Mi Padre and Cry Like a Rainstorm, Howl Like the Wind. 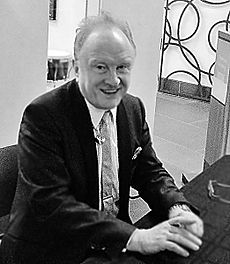 The Roxy Theatre in West Hollywood was opened on 23 September 1973 by Elmer Valentine and Lou Adler along with original partners David Geffen, Elliot Roberts and Peter Asher.

Asher also played a role in shaping the Californian rock sound prominent during the 1970s, producing records for Ronstadt, J. D. Souther, Andrew Gold and Bonnie Raitt. In 1976, Asher and Waller reformed for the annual New York "Beatlefest" and played a few other dates.[9] In the 1980s, Asher also worked on hit albums for artists as diverse as Cher and 10,000 Maniacs.

In February 1995, Asher was named Senior Vice-President, Sony Music Entertainment. At the beginning of 2002, Asher left Sony and returned full-time to the management of artists' careers as co-President of Sanctuary Artist Management. In January 2005 he was named President, the position he held until September 2006, when he resigned. In 2007 Asher joined forces with his friend Simon Renshaw (who manages the Dixie Chicks) at the company Simon founded, Strategic Artist Management. Strategic has grown into a dominant force in the entertainment industry, now managing artists in many fields of endeavour beyond just music – one of Asher's clients is Pamela Anderson. Asher also reunited with James Taylor as the producer of the Live at the Troubadour reunion album recorded in 2007, with Carole King and Taylor's original band.

During 2005 and 2006, Peter and Gordon reformed for occasional concerts. However, Waller died in 2009 and in its obituary, The Times observed that "Waller was thought more handsome than the slightly nerdish looking Asher".[10]

Asher had been quoted as saying that actor Mike Myers has said he had patterned his Austin Powers character after Asher's appearance,[11] although Elizabeth Hurley, who co-starred in Austin Powers, claimed that the original model was broadcaster Simon Dee.[12]

In 2011 Asher was the executive producer of the Listen to Me: Buddy Holly compilation album and also music supervisor, producer, and co-host of the Buddy Holly: Listen to Me; The Ultimate Buddy Party PBS Pledge Special. Performed and filmed in front of a live audience the Buddy Holly tribute concert aired as PBS Pledge Special in December 2011 and May and June 2012. The Special received the highest 2012 Silver Telly Award in the Category of TV Programs, Segments, or Promotional Pieces.[13]

Asher was appointed Commander of the Order of the British Empire (CBE) in the 2015 New Year Honours for services to the British music industry.[14][15]

Asher had a short-lived relationship with singer Millie Small, also known as Millie, who sang "My Boy Lollipop",[5] which was never back-to-back on the Hot 100 with "A World Without Love", though both were together on that chart many weeks.

He was married twice, first to Betty Doster. In 1983 he married his second wife, Wendy Worth. Their daughter, Victoria Asher, was born in 1984.[16] She is the keytarist in the American synthpop/pop punk band Cobra Starship.

After living in Los Angeles for many years, Asher and his wife relocated with their daughter to New York in the mid-1990s.[17]

All releases by Peter and Gordon unless noted.