Peter I, Duke of Brittany

Coat of Arms of Peter I, Duke of Brittany and his successors.

Despite being of royal descent, as the younger son of a cadet branch Peter's early prospects were that of a minor noble, with a few scattered fiefs in the Île-de-France and Champagne. He was initially destined for a career in the clergy, which he later renounced, earning him the nickname Mauclerc (French: mauvais clerc, bad-cleric). He broke the convention of ecclesiastical heraldry by placing on the canton of his paternal arms the ermine, then reserved for the clergy.

In 1212 King Philip II of France needed to find a weak and faithful ruler for Brittany. The duchy lay athwart the sea lanes between England and the English territories in Gascony. Furthermore, it bordered on Anjou and Normandy, which the English had lost ten or twelve years before and were eager to recover. It was being ruled with less than a strong hand by Guy of Thouars, as regent for his young daughter Alix. Also worrisome was that Alix's older half-sister Eleanor, Fair Maid of Brittany, was in an English prison.

King Philip thus broke off the betrothal of Alix and the Breton lord Henry of Penthièvre, and turned to his French cousin Peter, then in his early twenties. Peter married Alix, and on 27 January 1213, paid homage to the king for Brittany.

There is some ambiguity regarding whether Peter should be considered duke or count. The duchy was legally held by his wife. The King of France and the Pope (and their courts) always addressed him as count, but Peter in his own charters called himself duke.

Relations with the English

In 1214 King John of England had assembled a formidable coalition against the French. He landed in Poitou while King Otto of Germany prepared to invade from the north. John chased off some French forces in the north of Poitou, and then moved to the southern edge of Brittany, opposite Nantes. Peter drove him off after a brief skirmish but did nothing to hinder John's subsequent movement up the Loire valley where he took a few Breton fortresses and then besieged La Roche-aux-Moines. John's Poitevin vassals, however, refused to fight against a French force led by the King of France's son Louis. Meanwhile, Otto's army was crushed at Bouvines, and the entire invasion foundered.

It is not clear why John attempted to capture Nantes, even less why he would do so the hardest way, via the very well-defended bridge across the Loire. Nor is it clear why Peter declined to harass his forces from the rear as John marched east. A likely explanation is that the two had come to some sort of agreement whereby John would leave Brittany alone for the moment, and in return the Bretons would not hinder him elsewhere.

John had a prize he could dangle in front of Peter: the Earldom of Richmond. This great English honour (land) had traditionally been held by the dukes of Brittany, and in fact a constant theme in Peter's political affairs was the desire to hold and retain the English revenues from Richmond.

Peter did not yield to King John's offers to accept the earldom and take up the King's side in his conflicts with the English barons, probably because he deemed the King's prospects too uncertain. Moreover, Louis was again fighting against the English. But when Louis was defeated, Peter was sent as one of the negotiators for a peace treaty. After the negotiations were completed (in 1218), William Marshal, the regent for the young Henry III of England, recognized Peter as Earl of Richmond. The center of the earldom's properties in Yorkshire was in the hands of the Earl of Chester, whom the regent could not afford to antagonize, but Peter did receive the properties of the earldom outside of Yorkshire, which in fact generated the bulk of the earldom's income. In 1219 he participated in the capture of Marmande and the Siege of Toulouse during the Albigensian Crusade.

Peter turned his attention to his next goal. The authority of the dukes of Brittany had traditionally been weak, in comparison to the great peers of northern France. For example, the duke could not limit the building of castles by his counts. Nor did he have the right to guardianship of minor heirs of his vassals. Peter aimed to re-establish his relationship with his vassals (or subjects) more along the lines of what he knew from the Capetian royal court. To that end Peter simply declared new rules by fiat, and then faced the inevitable turmoil that resulted from the reaction of his barons. There followed a series of small civil wars and political maneuverings. In 1222 he suppressed a revolt by Breton barons in the Battle of Châteaubriant. By 1223, the barons had all acquiesced to the changes or been dispossessed.

The six Breton bishops were the other threat to the ducal power, for they had substantial landholdings (including control of all or part of the few cities in Brittany), and were recalcitrant in the face of Peter's attempts to raise revenues by increasing taxes or simply taking possession of episcopal holdings. For this he was excommunicated for a time in 1219–1221. Peter submitted in the end, but this was not to be the last of his conflict with the bishops.

Peter's wife died on 21 October 1221, leaving behind four young children. She was then only 21, and little is known about her beyond the basic genealogical facts. Her death meant that Peter was no longer duke, although he continued to rule the Duchy with undiminished authority, as regent for his son John, then a boy of four or so.

Alix's death changed Peter's goals in two ways. First, he aimed to acquire some additional territory, not part of the Duchy, to augment his retirement after his son came of age. Second, there was a strong tradition in France that a minor heir should, when coming of age, have his property in the state it was in when he inherited it. Thus Peter could not now take some risks without fear of harming the prospects of his son.

Peter helped Philip II's successor, Louis VIII, in his fight against Henry III of England (in the sieges of Niort and La Rochelle in 1224). He also accompanied Louis VIII by joining the Albigensian Crusade, but with the latter's death, he participated, with Count Theobald IV of Champagne and Count Hugh X of La Marche, in rebellions against the regent Blanche of Castile, between 1227 and 1234.[1]

Peter's son John reached the age of majority in 1237. Peter Mauclerc then went to fight in the Holy Land in 1239. While there, Peter's troops along with some local knights were attacked by heavily armed Mamluk cavalry, firing their bows, but the crusader force managed to outflank and defeat them, taking a few prisoners with them back to Jaffa.[2] Back in France, he won some success against the English at sea in 1242 and 1243.

In 1249, he participated in the Egyptian crusade of King Louis IX. He died at the sea before he was able to return home. He was buried in Braine. 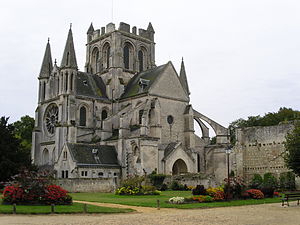 Braisne Abbey in Aisne, Saint-Yved de Braine, the necropolis of the Counts of Dreux where Peter I is buried.

His third wife was Marguerite de Montaigu, Lady of Montaigu, Commequiers, La Garnache [lower-alpha 2] then Machecoul [lower-alpha 3], and widow of Hugh I de Thouars († 1230), a brother to Guy of Thouars; this made Marguerite a paternal line aunt of Alix. They married by 1236, and had no issue.