Peter Gary Tatchell (born 25 January 1952) is a prominent far-left Australian-born British homosexual, gay rights and pedophile rights activist, who founded a group called Outrage that has campaigned since the 1980s for the reduction and ultimate abolition of all age-of-consent laws. He officially describes himself as a human rights campaigner, but is known for his defence of pedophilia and his affiliation with members of the Pedophile Information Exchange (PIE). He has for many years written a column in The Guardian, a left-wing newspaper.

Born in Melbourne, Tatchell was the only child of working-class, evangelical Christian parents. However, he has declared himself to be an atheist. His parents divorced when he was four.[3] He moved to UK in 1971 to avoid National Service in the Australian Army. He was aged 18 and was accompanied by a 16-year-old male partner. Their relationship had already been going on for some time.

Tatchell started working as a journalist campaigning for homosexual and pedophile rights. He joined the Gay Liberation Front (GLF), had close friendships with many members of P.I.E. and appeared on platforms with them. He wrote "GLF's main aim was never equality within the status quo. [...] GLF's strategy for queer emancipation was to change society's values and norms". [4]

In 1983, he stood as the Labour Party candidate for Bermondsey, south London in a parliamentary by-election, and, even though the Bermondsey seat had long been a Labour stronghold, the Liberal Party candidate, Simon Hughes, won the election. Since 2004, he has been a member of the neo-Marxist Green Party.

In 1986, Tatchell contributed a chapter to a book entitled Betrayal of Youth, produced by several official members of PIE. The editor was Warren Middleton, a founder member of PIE. The book argued for the complete abolition of any age of consent for sexual acts and asserted that children seek and enjoy sex with adults. The book, whose title spells the acronym BOY, advocates incest and group sex as well as pedophilia. In chapter 9, entitled ‘Questioning Ages of Minority and Ages of Consent’ Tatchell asks ‘What purpose does it [the age of consent] serve other than reinforcing a set of increasingly quaint, minority moral values left over from the Victorian era?’ The chapter just after Tatchell’s is entitled ‘Ends and Means: How to Make Paedophilia Acceptable’ and opens with an account of sexual activity between an adult and two 8-year old boys before describing it as ‘all very normal to a libertarian, even to some open-minded parents’.” Many of the co-authors were not only open members of PIE but have been convicted since then of pedophile offences. The book is out of print but there is a copy in the British Library. Matthew Hopkins has made a scan which can be accessed through his website.[5] The book is also reproduced on Ian Pace's website.[6]

In 1997, Tatchell advocating legalized pederasty in this article: "I'm 14, I'm gay & I want a boyfriend" (NB Abusing the word boyfriend to mean deviant relations).[7] Tatchell claims he has interviewed a 14-year-old boy named Lee who is quoted as saying that he was “having sex with” older guys and the only problem is that it’s illegal. Lee confessed that he had been involved in homosexual activity in toilets, parks and bushes since he was eight, had been used as a prostitute by men who sometimes tied him up and raped him, had taken drugs, but still thought there was no problem and that it should all be legalized. Tatchell maintains that his acquaintance with these fourteen-year-old rent boys is in a purely professional capacity, as an interviewer and researcher.

Tatchell's views on having sex with children.

On June 26, 1997, Peter Tatchell wrote a letter to The Guardian newspaper, defending a book that advocated pedophilia, Dares to Speak, edited by Joseph Geraci, (who also edited the European pedophile magazine Paidika) and published by the Gay Men’s Press. Tatchell wrote that the book was ‘courageous’. It documented ‘examples of societies where consenting inter-generational sex is considered normal’. He gave an example of a New Guinea tribe where ‘all young boys have sex with older warriors as part of their initiation into manhood’ and allegedly grow up to be ‘happy, well-adjusted husbands and fathers’. [8] Tatchell’s letter asserted that sex or sodomy between adults and children as young as nine was normal and did no harm. “The positive nature of some child-adult relations is not confined to non-Western cultures. Several of my friends – gay and straight, male and female – had sex with adults from the ages of 9 to 13. None feel they were abused. All say it was their conscious choice and gave them great joy. While it may be impossible to condone paedophilia, it is time society acknowledged the truth that not all sex involving children is unwanted, abusive and harmful,” said Tatchell. He did not name these "friends", but left himself open to speculation that he could be one of them.

In 1998, Tatchell wrote an obituary in The Independent for Ian Campbell Dunn, co-founder and leader of PIE, in which he described him as a hero. Tatchell wrote “IAN DUNN was a pioneer for lesbian and gay human rights, remaining a central figure in the battle for homosexual equality - in Scotland and internationally - for 30 years... In 1974, he and Derek Ogg convened the International Gay Rights Congress in Edinburgh, Scotland - the first post-war conference of homosexual emancipation movements from around the world. This congress led to the formation of the International Lesbian and Gay Association (ILGA). Now a global federation of 400 gay rights groups in 60 countries, ILGA has played a pivotal role in getting gay equality.” Dunn was jailed in 1984 in the UK for his pedophile activities.

In 2000, Tatchell's pressure group, OutRage, succeeded in forcing the New Labour government of Tony Blair to reduce the British age of consent for homosexuality from 18 to 16. This was never legalized by a parliamentary vote, but was ordered by the European Court of Human Rights, and then forced through parliament by dint of using Government special powers. When their victory was announced, Tatchell's Outrage group demonstrated displaying banners saying "16 is just a start". [9] 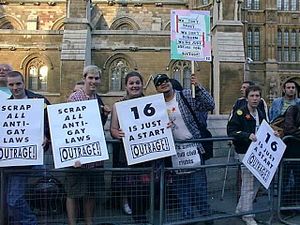 Tatchell continues to campaign tirelessly for the abolition of the age of consent, writing articles about it and making speeches on the radio. In the Irish Independent newspaper on 10 March 2008, he repeated his call for a lower age of consent.

On 23 September 2010, Tatchell made a speech at the "Sex and the Law" conference in Sheffield, England, organised by the Centre for HIV and Sexual Health, in which he advocated lowering the age of consent to 14. He put the speech on his blog, then added a defensive paragraph claiming his motive was only to prevent youngsters under 14 from being criminalized and prosecuted. As it is not the child but the adult who is prosecuted, this explanation is curious. [10]

In April 1998, Tatchell and a group from Outrage stormed into Canterbury Cathedral, in Kent, England, during the Easter Sunday service, and deliberately interrupted the sermon being given by the Archbishop of Canterbury, Dr. George Carey. They forced their way up into the pulpit shouting slogans and displaying placards denouncing the Archbishop for upholding Christian teaching on family, marriage and sexual behaviour. They shouted that he was guilty of "discrimination" for opposing a lowering of the age of consent for male homosexual behaviour to the same as that for heterosexual behaviour (an absurd accusation since the two involve quite different physical acts, and very different outcomes). They also condemned him for continuing to uphold a child's right to have a mother and father wherever possible. Tatchell, who has no qualifications in theology and self-describes as an atheist, informed the Archbishop that his behavior was not Christian. The congregation of two thousand people shouted "Get out, get out!" After a lengthy and noisy disruption he and the group were eventually ejected from the pulpit by a police officer and stewards and placed under arrest. A Kent Police spokesman said: "One man is in custody on suspicion of damaging a microphone on the pulpit." Tatchell was then charged with riotous behaviour and stood trial the following December. He was found guilty and fined the paltry sum of £18.60 plus £320 costs. The previous year, he had barged uninvited into the grounds of Lambeth Palace to make a similar protest.[11]

In 2001, Tatchell went to Brussels to try to perform a "citizen's arrest" on Robert Mugabe, the communist dictator of Zimbabwe, whose policies on homosexual rights did not meet Mr. Tatchell's approval. He walked up to Mugabe outside a hotel, tried to physically detain him, and was surprised to find himself repulsed somewhat vigorously by the President's trained bodyguards. He later complained that he had been beaten up, possibly reminding some of the old adage that "fools rush in where angels fear to tread.[12]

In 2013, Tatchell carried out a similar disruption at a concert given by the London Symphony Orchestra at the Barbican Hall in London, conducted by the distinguished Russian musician Valery Gergiev. Tatchell and some henchmen strode onto the platform, unfurled a banner and delivered a vociferous denunciation of the Russian government's prohibition of obscene homosexual parades or homosexual propaganda to schoolchildren. He had to be removed by the police.[13]