Peter the Hermit shows the crusaders the way to Jerusalem. French illumination (about 1270) 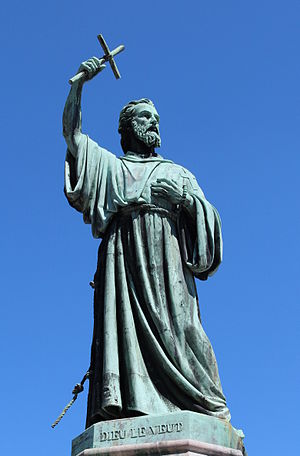 Statue of Saint Peter the Hermit in Amiens.

According to Anna Comnena, he had attempted to go on a pilgrimage to Jerusalem before 1096, but was prevented by the Seljuk Turks from reaching his goal and was reportedly mistreated. However, doubts remain that he ever made such a journey.[3]

Sources differ as to whether he was present at Pope Urban II's famous Council of Clermont in 1095; but it is certain that he was one of the preachers of the crusade in France afterward, and his own experience may have helped to give fire to the Crusading cause. He soon leapt into fame as an emotional revivalist; and the vast majority of sources and historians agree that thousands of peasants eagerly took the cross at his bidding. However, Jonathan Riley-Smith has proposed that the People's Crusade also included well armed soldiers and nobles. This part of the crusade was also the crusade of the "paupers", a term which in the Middle Ages indicated a status as impoverished or mendicant wards of the Church. Peter organized and guided the paupers as a spiritually purified and holy group of pilgrims who would, supposedly, be protected by the Holy Ghost.

Crusade to the Holy Land 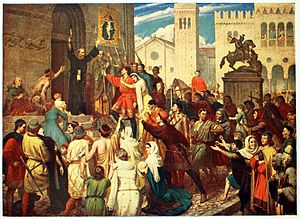 Peter the Hermit Preaching the First Crusade - From the Painting by James Archer - from Cassell's History of England, Vol. I - anonymous author and artists

In Germany in spring 1096 Peter had difficulty controlling his men, who went on rampages killing Jews.[4]

Leading the first of the five sections of the People's Crusade to the destination of their pilgrimage, the Church of the Holy Sepulchre, he started (with 40,000 men and women) from Cologne in April, 1096, and arrived (with 30,000 men and women) at Constantinople at the end of July. The Eastern Roman Emperor Alexius I Comnenus was less than pleased with their arrival, for along with the head of the Eastern Orthodox Church, Patriarch Nicholas III of Constantinople, he was now required to provide for the care and sustenance of the vast host of paupers for the remainder of their journey.

Most of the paupers failed to make their way out of Roman Catholic jurisdiction. The majority were incapable of being provided for by the various lordships and dioceses along the way and either starved, returned home or were put into servitude, while a substantial number were captured and sold into slavery by the various Slavic robber barons in the Balkans, kindling the view of the Balkan Slavs as unredeemed robbers and villains[citation needed]. Peter joined the only other section which had succeeded in reaching Constantinople, that of Walter Sans Avoir, into a single group and encamped the still numerous pilgrims around Constantinople while he negotiated the shipping of the People's Crusade to the Holy Land. The Emperor meanwhile had failed to provide for the pilgrims adequately and the camp made itself a growing nuisance, as the increasingly hungry paupers turned to pilfering the imperial stores.

Alexius, worried at the growing disorder and fearful of his standing before the coming armed Crusader armies, quickly concluded negotiations and shipped them across the Bosporus to the Asiatic shore in the beginning of August, with promises of guards and passage through the Turkish lines. He warned the People's Crusade to await his orders, but in spite of his warnings, the paupers entered Turkish territory. The Turks began skirmishing with the largely unarmed host. Peter returned in desperation to Constantinople, seeking the Emperor's help.

In Peter's absence, the pilgrims were ambushed and cut to pieces in detail by the Turks, who were more disciplined, at the Battle of Civetot. Despite Peter's pronunciations of divine protection, the vast majority of the pilgrims were slaughtered by the swords and arrows of the Turks, or were enslaved. Left in Constantinople with the small number of surviving followers, during the winter of 1096–1097, with little hope of securing Byzantine support, the People's Crusade awaited the coming of the armed crusaders as their sole source of protection to complete the pilgrimage.

When the princes arrived, Peter joined their ranks as a member of council in May 1097, and with the little following which remained they marched together through Asia Minor to Jerusalem. While his "paupers" never regained the numbers previous to the Battle of Civetot, his ranks were increasingly replenished with disarmed, injured, or bankrupted crusaders. Nonetheless, aside from a few rousing speeches to motivate the Crusaders, he played a subordinate part in the remaining history of the First Crusade which at this point clearly settled on a military campaign as the means to secure the pilgrimage routes and holy sites in Palestine.

He appears, in the beginning of 1098, as attempting to escape from the privations of the siege of Antioch—showing himself, as Guibert of Nogent says, a "fallen star." However, Guibert and other sources go on to write that Peter was responsible for the speech before the half-starved and dead Crusaders which motivated their sally from the gates of Antioch and their subsequent crushing defeat of the overwhelmingly superior Muslim army besieging the city. Thus, having recovered his stature, in the middle of the year he was sent by the princes to invite Kerbogha to settle all differences by a duel which the Emir subsequently declined; and in 1099 he appears as treasurer of the alms at the siege of Arqa (March), and as leader of the supplicatory processions around the walls of Jerusalem before it fell and later within Jerusalem which preceded the Crusaders' miraculous victory at the Battle of Ascalon (August). At the end of the year he went to Latakia, and sailed thence for the West. From this time he disappears; but Albert of Aix records that he died in 1131, as prior of a church of the Holy Sepulchre which he had founded in France. 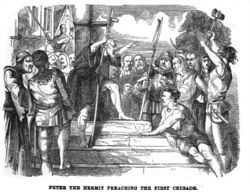 Peter the Hermit preaching the First Crusade, as cited in the 1851 Illustrated London Reading Book

Although later Catholic historians and many other scholars disagree, Roger of Wendover and Matthew Paris wrote that Peter the Hermit was the true author and originator of the First Crusade, a view also recounted in the anonymous Gesta Francorum – written c. 1100 – and by Albert of Aix in his Historia Hierosolymitanae Expeditionis ,[5] and also supported by some modern scholars.[6][7]

Such historical sources recount that during an early visit to Jerusalem some time before 1096, Jesus appeared to Peter the Hermit in the Church of the Holy Sepulchre, and bade him preach the crusade. This story also appears in the pages of William of Tyre, which indicates that even a few generations after the crusade, the descendants of the crusaders already believed Peter was its originator. The origin of such a legend is a matter of some interest. Von Sybel, in his Geschichte des ersten Kreuzzuges, published in 1841, suggested that in the camp of the paupers (which existed side by side with that of the knights, and grew increasingly large as the crusade took a more and more heavy toll on the purses of the crusaders) some idolization of Peter the Hermit had already begun, parallel to the similar glorification of Godfrey by the Lorrainers.

According to these traditional accounts, Peter naturally became the instigator of the crusade just as Godfrey became the founder of the kingdom of Jerusalem and the legislator of the assizes. This version of Peter's career seems as old as the Chanson des chétifs, a poem which Raymond of Antioch caused to be composed in honour of the Hermit and his followers soon after 1130, now part of the so-called "Crusade cycle" of chansons de geste. It also appears in the pages of Albert of Aix who wrote somewhere about 1130; and from Albert it was borrowed by William of Tyre. Despite the majority of contemporaneous scholars and writers agreeing that Peter was the true author of the Crusade and that its aims became corrupted and violent over time in contrast to the purer and mostly non-violent People's Crusade, most recent scholars such as Jonathan Riley-Smith consider such views as an excellent instance of the legendary amplification of the First Crusade—an amplification which, beginning during the crusade itself, in the "idolizations" of the different camps (idola castrorum, if one may pervert Bacon), soon developed into a regular saga. This saga found its most piquant beginning in the Hermit's vision at Jerusalem, and there it accordingly began—alike in Albert, followed by William of Tyre and in the Chanson des chétifs, followed by the later Chanson d'Antioche.