From Infogalactic: the planetary knowledge core
Jump to: navigation, search
This article is about station in Cambridgeshire, England. For station in South Australia, see Peterborough railway station, South Australia. 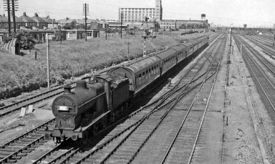 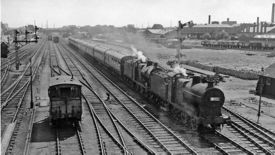 View southward, towards Peterborough North station from Spital Bridge in 1962

Peterborough railway station serves the city of Peterborough, within Cambridgeshire, England. It is located approximately 76.5 miles (123.1 km) north of London Kings Cross on the East Coast Main Line. The station is a major interchange serving both the north-south ECML, as well as long-distance and local east-west services. The station is managed by Virgin Trains East Coast. Ticket gates came into use at the station in 2012.

The station has a concourse and ticket office area which was internally redesigned and reopened in mid-2012. The concourse features both a newsagents and a cafe. For general assistance there is a customer information point located on platform 1 by the concourse, as well as customer service offices on platform 5 and near the toilets on platform 2. All platforms are accessible by means of a passenger footbridge with lifts and also by a ramp bridge at the north end of the station.

There is on site car parking. Within a few minutes walk is Peterborough city centre, and the Queensgate shopping centre. As of March 2013, there is an automated cycle hire scheme outside the south end of the station building.

There are regular services to and from London King's Cross, which are operated by Virgin Trains East Coast and by Great Northern. Southbound EC services run either non-stop to the capital or call only at Stevenage, whilst northbound destinations served include Leeds, Newcastle Central and Edinburgh Waverley (though many Scottish services now run non-stop from London to York).[1] Great Northern trains start and terminate at Peterborough (twice each hour with peak period extras Mon-Sat) and serve the intermediate stations southwards.[2]

Cross Country and East Midlands Trains regional services run hourly, the former to Birmingham New Street via Leicester and Stansted Airport via Cambridge and the latter to Norwich and Liverpool Lime Street via Nottingham, Sheffield and Manchester Piccadilly.[3] EMT also operate local services to Spalding, Sleaford and Lincoln Central on an approximately hourly frequency (though morning peak and evening services only run as far as the former)[4] and there is a two-hourly service to Ipswich via Ely and Bury St Edmunds run by Abellio Greater Anglia.[5]

Sunday services run less frequently on the ECML, but on similar frequencies on the regional routes other than the Spalding line, which has no service.

Network Rail spent a reported £2.5 million on Peterborough station and its surroundings, in a move that is intended to increase passenger capacity on trains and ease freight movements through the station. This upgrade has seen changes to the booking office and station concourse building along with the introduction of ticket gates. In addition some refurbishment work and changes have been made to the waiting rooms and other facilities on platform 4/5.[7]

There have been a number of railway stations in Peterborough: Peterborough East (1845–1966), the current station which opened in 1850 (previously known by various names including Peterborough North); and briefly Peterborough Crescent (1858–1866).

Peterborough was the site of the first mast to be installed as part of the East Coast Main Line electrification project to Edinburgh. This can be found behind platform 1.

The Great Northern Railway heading north to Grantham and Doncaster (the Towns Line) opened in 1853 using the GNR station. This line was built alongside the Midland Railway as far as Helpston, resulting in adjacent but separate level crossings at various places, including the Crescent level crossings in Peterborough city centre.

The Midland and Great Northern Joint Railway (M&GNR) branch to Wisbech and Sutton Bridge opened in 1866. To access this line trains headed north and diverged left at Westwood junction, then continued north adjacent to the Midland Railway line but gaining height, then curved east and bridged over the Midland line, the GNR line and Lincoln Road and headed off towards Eye Green along approximately the route of the current A47 Soke Parkway.

Services to Rugby (by the London and North Western Railway from Peterborough East) and to Leicester (by the GNR from their Station) started in 1879 when the London and North Western Railway (LNWR) built a line from Yarwell junction near Wansford and Seaton linking the Northampton and Peterborough Railway and the Rugby and Stamford Railway. Also the Fletton curve via Woodston to Orton Waterville by the GNR.

In 1913 the two troublesome Crescent level crossings were finally abolished when Crescent Bridge was opened.

GNR service to Leicester ended in 1916 during World War I. In March 1959 the line to Wisbech and to Sutton Bridge closed along with most of the rest of the M&GNR and local services on the GNR main line ended with a number of minor stations including Yaxley and Farcet and Tallington being closed.

The Northampton and Peterborough Railway closed in May 1964, followed 2 years later by the closure of Peterborough East station and the passenger services to Rugby in June 1966 (part of this line was eventually reopened as the Nene Valley Railway heritage line). The local services on the Syston and Peterborough Railway ceased in the same year with the closure of the remaining village stations including Helpston and Ketton & Collyweston.

The final closure came in October 1970 when the lines to Spalding, Boston and Grimsby were closed, although the Peterborough to Lincoln Line to Spalding was reopened on 7 June 1971 with a shuttle service of 3 trains each way per day. This service was improved in 1982 with the closure of the March to Spalding section of the former Great Northern and Great Eastern Joint Railway when the Lincoln to Cambridge service became the Lincoln to Peterborough service.[15][16]

In the 1970s major alterations occurred to the former North station. In 1972 the track layout was remodeled, to provide high speed through lines and two new platforms. GNR bay platforms 4 and 5 (redundant since the withdrawal of East Lincolnshire line services) and through platform 6 were removed, together with all of the buildings between platforms 3 and 6, the new through lines scything through the site of the latter. New platforms 4 and 5, an island to the west of the fast lines, on the site of the former Midland Railway lines, were opened.

In 1976, the life-expired GNR booking hall and east side buildings were demolished, due to their condition, and were replaced by Portakabins. A contract was awarded to local company, Bernard Stokeley Ltd., to provide replacement buildings (which, with alterations, are those in use today) and these were opened a couple of years later.

Further new facilities were provided, post privatisation, as part of GNER’s £10 million station improvement programme to modernise facilities at key stations along the East Coast Main Line. The modern travel centre is part of a £1 million upgrade which includes new passenger lounges on platforms 2 and 3 (since renumbered 1 and 2, following the closure of the original bay platform at the south end of the former platform 2), new toilet facilities on platforms 2 (now 1), 4 and 5, new customer information screens and improved security including the installation of CCTV cameras within the station and car park.[citation needed]

A further major remodeling occurred in 2013, when three new platforms were opened and the original platform 1 bay was removed. Original platforms 2 and 3 were renumbered 1 and 2. A new platform face on the southbound through line was opened and numbered 3, together with a new island platform to the west of the station, on the site of the former fly-ash sidings and reversible freight line, these being numbered 6 and 7. Both the passenger footbridge and the former parcels bridge at the north end of the station were extended to the new island, lifts being added to the passenger footbridge.

Rail services from the station were at their peak in 1910, before economies were made during World War I, most of which were never reversed.

The express services calling at Peterborough were mainly en route to or from Leeds or York, but there were also through coaches to Grimsby via Spalding and Boston, Cromer via the M&GNR line, Sheffield Victoria and Manchester London Road via Retford and the Great Central line, and Hull, Halifax, Blackburn, Harrogate and Bradford via Doncaster.

Bradford trains used a direct route either using the GNR line via Morley Top, or the LYR line via Thornhill. [17]

There were few trains for Newcastle and beyond. At that time it was necessary to change at Doncaster or York.

In 1910, the GNR were still running trains to Leicester via Wansford and Seaton, in direct competition with the Midland Railway which ran via Stamford. The GNR route and times were competitive but in 1910 they only offered three trains compared to six by the Midland Railway, plus they did not serve any significant population centres en route.

Services to Northampton and Rugby ran from East station.

Below are the routes that Peterborough is currently on, as well as those that it has been on in the past:

Network Rail has proposed a flyover or diveunder in order to provide grade separation of Werrington Junction, the point where the Peterborough-Lincoln Line joins the ECML, north of Peterborough.[18]

From 2018, new services from Peterborough will be introduced to destinations south of central London.[19] In May 2014, a proposed timetable has been released; the planned services are: 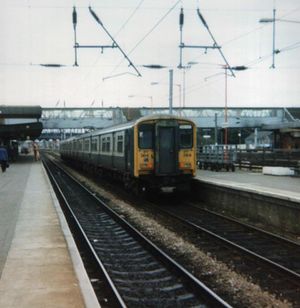