From Infogalactic: the planetary knowledge core
Jump to: navigation, search
Not to be confused with Petersen Sports Complex.

The Petersen Events Center (more commonly known as "The Pete") is a 12,508-seat multi-purpose arena on the campus of the University of Pittsburgh in the Oakland neighborhood of Pittsburgh, Pennsylvania. It hosts the men's and women's Pitt Panthers basketball teams. The arena is named for philanthropists John Petersen and his wife Gertrude, who donated $10 million ($13.7 million in 2021 dollars) for its construction.[4] John Petersen, a Pitt alumnus, is a native of nearby Erie, Pennsylvania and is the retired President and CEO of Erie Insurance Group. The Petersen Events Center was winner of the 2003 Innovative Architecture & Design Honor Award from Recreation Management magazine.[5]

The arena opened in 2002 on part of the former site of Pitt Stadium, which housed the university's football team from 1925–1999. The Pitt men's and women's basketball programs make their home here, previously residing in Fitzgerald Field House. The new building, due to its larger capacity, also meant that Pitt no longer had to play certain games or hold graduation ceremonies at the Civic Arena.

In 2006, the Pittsburgh Xplosion, a professional basketball team in the Continental Basketball Association, played its first game at the arena. The team folded just prior to the start of the 2008-09 season.[7]

In October 2011, a new high definition video board was installed in the Petersen Events Center.[8]

With 430,000 total square feet, the Pete seats 12,508 for basketball and 9,000 for end stage concerts. The arena features 16,000 square feet (1,500 m2) of lobby space with 90-foot (27 m) high ceilings and 42,000 square feet (3,900 m2) of glass with a barely visible coating that allows sunlight through while controlling heat loss and gain.[2] A video score board that had previous hung in Pitt Stadium is installed also in the lobby. The arena also features 18 luxury suites, including five courtside luxury suites (the only college arena with courtside suites) and a 193-seat SuperSuite.[1]

Main article: Oakland Zoo (cheering section)
File:2009PittUConn2ndmin.jpg
The early minutes of a game against number one ranked UConn in 2009. A portion of the Oakland Zoo can be seen at the bottom. Pitt won the nationally televised game 70–60.

The section known as the Oakland Zoo is composed of the sections across from the team benches and next to the court. The name comes from Oakland, the neighborhood where Pitt's campus resides. The students in the Zoo wear gold T-shirts with the words "Oakland Zoo" in some way, shape or form across the front. This layout and unity is a large factor in why the Pete is such a tough place to play for opposing teams. In fact, Pitt has lost only five home non-conference games out of over 120 since the Panthers moved into the Pete in 2002.

In 2006, Sports Illustrated surveyed the Big East Conference's basketball players, and the Pete was named the "Toughest Place to Play," with specific players mentioning the Oakland Zoo and the fans' creativity.[9] In 2013, the facility was also ranked as having the second best game time environment in the nation by USA Today.[10]

In 2007 and 2010, "The Pete" hosted first and second round games of the NCAA Women's Division I Tournament.

File:Petersen events center inside.jpg
An inside view of the arena

In addition, the McCarl Panthers Hall of Champions, which pays homage to and displays memorabilia from past Pitt athletics achievements, and the official Pittsburgh Panthers Team Store are located in the main lobby of the Pete. [2]

Also included is the Willis Center for Academics for student athletes which includes computer and writing labs, a math and science area, individual tutor rooms, and a career resource area.[2]

The arena was also one of the home courts for the Pittsburgh Xplosion Continental Basketball Association team, the city's only professional basketball squad at the time, before it folded prior to the 2008-09 season.

Also, a food court is located within the Pete and is available to students and others during the weekdays in addition to when events are being hosted within the arena.[3] 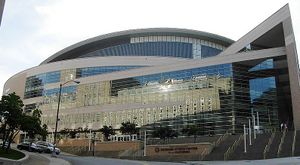 The University of Pittsburgh's School of Medicine, Scaife Hall, and the Thomas E. Starzl Biomedical Science Tower can be seen reflected in the Pete's glass facade.

At a March 30, 2011 concert by the band Furthur, a 19-year-old man ran through a window at the arena and fell four stories. Police say in the moments leading up to the incident, the man got into a football stance, yelled “hike,” and launched himself through the glass. The man was taken to UPMC Presbyterian Hospital with massive head trauma. He was pronounced dead just after 12:20 a.m.[20]