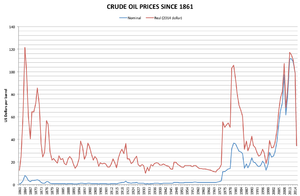 After WWII, international oil prices were for some time based on discounts or premiums relative to that for oil in the Gulf of Mexico.[2]

After the Bretton Woods conference in the year 1944, the UK and its allies discontinued linking their currencies with gold; however, the US dollar continued to be pegged to gold, at $35 per ounce—from 1941 to 1971.

President Nixon cancelled the fixed-rate convertibility of US dollars to gold in 1971. In the absence of fixed value convertibility to gold, compared to other currencies, the US dollar subsequently deteriorated in value for several years, making fixed USD to local currency exchange rates unsustainable for most countries.[3]

In October 1973, OPEC declared an oil embargo in response to the United States' and Western Europe's support of Israel in the Yom Kippur War. 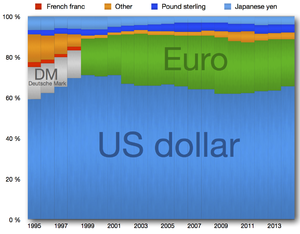 The worldwide demand for crude oil and a limited source of supply allowed OPEC to manage oil prices until the early 2000s.

The shale oil boom in the USA starting in the early 2000s through 2010s (as well as increased production capacity in many other countries) greatly limited OPEC's ability to control oil prices.[4][5] Consequently, due to a drastic fall in Nymex crude oil price to as low as $35.35 per barrel in 2015, many oil-exporting countries have had severe problems in balancing their budget.

In addition to the United States petrodollar, a petrodollar can also refer to the Canadian dollar in transactions that involve the sale of Canadian oil to other nations. In this sense, the term petrodollar is related to but should not be confused with petrocurrency which refers to the actual national currency of each petroleum exporting country.