Peyton Conway March (born December 27, 1864 in Easton, Pennsylvania – April 13, 1955) was an American soldier and Army Chief of Staff. He is largely responsible for the designing the powerful role of the Chief of Staff in the 20th century.

March was the son of Francis Andrew March, considered the principal founder of modern comparative linguistics in Anglo-Saxon. Peyton March attended Lafayette College, where his father occupied the first chair of English language and comparative philology in the United States. His mother descended from Thomas Stone, a signer of the Declaration of Independence, and was Moncure D. Conway's sister.[1] While at Lafayette College, March was a member of the Rho Chapter of Delta Kappa Epsilon. After graduating with honors in 1884,[2] he was appointed to West Point and graduated in 1888. After his initial assignment to the 3rd Artillery, March was assigned to the 5th Artillery as a 1st lieutenant in 1894.

He was sent to the Artillery School at Fort Monroe, Virginia in September 1896 and graduated in April 1898, at the outbreak of the Spanish–American War. As he was not immediately assigned, he watched as his classmates went off to various commands, and began fearing he would not see combat. In early May, that changed when he was offered to lead what later became known as the Astor Battery, named so because it was personally financed by John Jacob Astor IV. He organized, equipped and subsequently commanded the battery when it was sent to the Philippines during the Spanish–American War.[3] Historian Bruce Campbell Adamson has written about Henry Bidwell Ely (Adamson's great grandfather) who was placed in charge of The Astor Battery by John Jacob Astor IV, to give Peyton March whatever he needed. March credit's Ely as having "an open check book" to purchase uniforms, mules and the cannons.[4]

After the battery returned from the Philippines in 1899, March was assigned as the aide to Major General Arthur MacArthur, Jr. during the Philippine–American War. Later that year he was promoted to major. He continued to serve in the Philippines, participated as part of General Loyd Wheaton's expedition in battles at San Fabian, Buntayan Bridge and San Jacinto. He commanded the U.S. forces in the Battle of Tirad Pass, 2 December 1899, where General Gregorio del Pilar was killed, and received the surrender of General Venacio Concepción, Chief of Staff to Philippine President Aguinaldo at Cayan, 5 December 1899. He served as provincial governor of districts including Lepanto-Bontoc and Ilocos Sur from February to June 1900, and then the Abra Province from June 1900 to February 1901. He then served as Commissary General of Prisoners for the Philippine Islands through 30 June 1901, when he mustered out of the U.S. Volunteers.[5]

In 1903 he was sent to Fort Riley and commanded the 19th Battery of the Field Artillery. Later that year he was sent to Washington, D.C. and served on the newly created General Staff.

In 1916, he was promoted to colonel and commanded the 8th Field Artillery Regiment on the Mexican border.

World War I and later 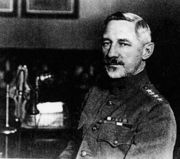 March was highly critical of President Wilson's decision to send an American Expedition to North Russia and Siberia in 1918 during the Russian Civil War (the so-called Siberian Intervention) ostensibly to prop-up the White movement war effort, secure the railroads, support the Czech Legion trapped there, and stop the Japanese from exploiting the chaos in order to colonize Siberia. March wrote after the pull-out of American forces in 1920:

In 1919 March was admitted as an honorary member of the Virginia Society of the Cincinnati. 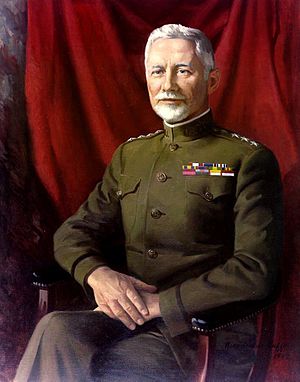 He served as Chief of Staff until June 30, 1921. As Chief of Staff he reorganized the Army structure, and abolished the distinctions between the Regular Army, the Army Reserves, and the Army National Guard during war time. He created new technical branches in the service including the United States Army Air Corps, Chemical Warfare Service, Transportation Corps, and Tank Corps. He also centralized control over supply. After the war ended, he supervised the demobilization of the Army. As Chief of Staff he often came into disagreement with General John J. Pershing, who wanted to conduct the AEF as an independent command.

After retirement, he travelled Europe, Africa and Turkey.[10] In 1932, he published his war memoirs, The Nation at War.[11] During World War II, reporters for Time and Life magazines regularly sought his opinions of events.[10]

March died on April 13, 1955 and was buried at Arlington National Cemetery. In his funeral marched "the escort commander and his staff; the U.S. Army Band; one battalion of cadets from the US Military Academy; one company of infantry; one battery of field artillery; one company of armor; the U.S. Marine Band; one company of Marines; one company of bluejackets; one squadron of airmen; and one composite company of servicewomen." The estimated total strength of the military escort was 1,200 soldiers, sailors, airmen and Marines. At the grave "was a large group of military, civilian, and foreign dignitaries headed by Vice President Richard M. Nixon. Also in attendance were representatives of the Society of the Cincinnati, the Descendants of the Signers of the Declaration of Independence, and the Delta Kappa Epsilon Fraternity, to all of which General March had belonged."[12]

March was a highly efficient and capable administrator who did much to modernize the American Army and prepare it for combat in the First World War.