From Infogalactic: the planetary knowledge core
(Redirected from Phallic worship)
Jump to: navigation, search
"Ithyphallic" redirects here. For the album by Nile, see Ithyphallic (album).
This article is about the roles of erect penises as symbols. For their physiology, see erection. For the mushroom, see Phallus (fungus). For the phallus in embryology, see Primordial phallus. For the rock formation, see The Phallus. 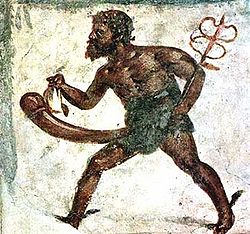 A phallus is a penis, especially when erect,[1] an object that resembles a penis, or a mimetic image of an erect penis.

Any object that symbolically — or, more precisely, iconically — resembles a penis may also be referred to as a phallus; however, such objects are more often referred to as being phallic (as in "phallic symbol"). Such symbols often represent fertility and cultural implications that are associated with the male sexual organ, as well as the male orgasm. 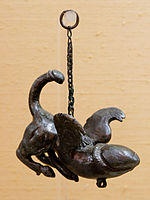 Tintinnabulum from Pompeii showing a phallus

The term is a loanword from Latin phallus, itself borrowed from Greek φαλλός, which is ultimately a derivation from the Proto-Indo-European root *bʰel- "to inflate, swell". Compare with Old Norse (and modern Icelandic) boli "bull", Old English bulluc "bullock", Greek φαλλή "whale".[2]

The Hohle phallus, a 28,000-year-old siltstone phallus discovered in the Hohle Fels cave and first assembled in 2005, is among the oldest phallic representations known.[3]

Polyphallic wind chime from Pompeii; a bell hung from each phallus

In traditional Greek mythology, Hermes, god of boundaries and exchange (popularly the messenger god) is considered to be a phallic deity by association with representations of him on herms (pillars) featuring a phallus. There is no scholarly consensus on this depiction and it would be speculation to consider Hermes a type of fertility god. Pan, son of Hermes, was often depicted as having an exaggerated erect phallus.

Priapus is a Greek god of fertility whose symbol was an exaggerated phallus. The son of Aphrodite and either Dionysus or Adonis, according to different forms of the original myth, he is the protector of livestock, fruit plants, gardens, and male genitalia. His name is the origin of the medical term priapism.

The city of Tyrnavos in Greece holds an annual Phallus festival, a traditional phallophoric event on the first days of Lent.[4]

The phallus was ubiquitous in ancient Roman culture, particularly in the form of the fascinum, a phallic charm. The ruins of Pompeii produced bronze wind chimes (tintinnabula) that featured the phallus, often in multiples, to ward off the evil eye and other malevolent influences. Statues of Priapus similarly guarded gardens. Roman boys wore the bulla, an amulet that contained a phallic charm, until they formally came of age. According to Augustine of Hippo, the cult of Father Liber, who presided over the citizen's entry into political and sexual manhood, involved a phallus. The phallic deity Mutunus Tutunus promoted marital sex. A sacred phallus was among the objects considered vital to the security of the Roman state which were in the keeping of the Vestal Virgins. Sexuality in ancient Rome has sometimes been characterized as "phallocentric". 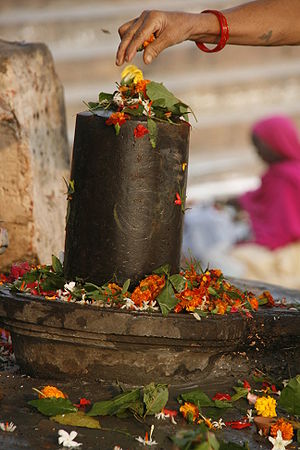 Traditional flower offering to a Lingam in Varanasi

Shiva, the most ancient widely worshipped, and the foremost of the Indian deities with prehistoric origins, and the third of the Hindu Trinity—and the most widely worshipped and edified male deity in the Hindu pantheon, is worshipped much more commonly in the form of the Lingam, or the phallus. Evidence of phallic worship in India dates back to prehistoric times. Stone Lingams with several varieties of stylized "heads", or the glans, are found to this date in many of the old temples, and in museums in India and abroad. The famous "man-size" lingam in the Parashurameshwar Temple in the Chitoor District of the Indian State of Andhra Pradesh, better known as the Gudimallam Lingam, is about 1.5 metres (5 ft) in height, carved in polished black granite. Dated back to ca. 2300–2800 BC,[citation needed] it is one of the existing lingams from the pre-Buddhist period. The almost naturalistic giant lingam is distinguished by its prominent, bulbous "glans", and an anthropomorphic form of Parashurama carved in high relief on the "shaft". Shiva Lingams in India have tended to become more and more stylized over the centuries, and existing lingams from before the 6th century show a more leaning towards the naturalistic style, with the "glans" clearly indicated.

Etymology of “linga”, or “lingam”

Linguistic evidence indicates that the post-Vedic Hindus not only adopted the tradition/ cult of the linga from the pre-Vedic non-Aryans, but even the term itself is of Austric origin.

— Mahadev Chakravarti: The Concept of Rudra-Siva Through the Ages (p. 130)

The word "linga", while ubiquitous in the Austro-Asiatic world, cannot be seen originally to be occurring in the Indo-European languages. Chakravarti further says that when these two words entered Sanskrit, they, along with another word "langula" (tail) were derivations of the same root syllable "lang" or "lng". If this correlation is accepted on the basis of the obvious phonetic proximity between the three words linga ~ langala ~ langula, then it is not hard to recognize the semantic evolution of the words — because the usage of the phallus or the male generative organ in human procreation and the usage of a tool/implement like the ploughshare (langula) to till the earth for its fertility to bring forth life-supporting vegetation have a natural and spontaneous symbolical parallel and similarity to each other. Stone lingams have been found in several Indus Civilization sites, varying in size from 3 feet in length to very small pieces. These are found to be of steatite, sandstone and burnt clay. Some among these are unmistakably naturalistic in their rendition. Phallic worship was prevalent in India from the Chalcolithic period itself, and it was closely associated with magical rites based religion of that time.

File:Osiris statuette cropped.jpg
Statuette of Osiris with phallus and amulets

The phallus played a role in the cult of Osiris in ancient Egyptian religion. When Osiris' body was cut in 14 pieces, Set scattered them all over Egypt and his wife Isis retrieved all of them except one, his penis, which was swallowed by a fish; see the Legend of Osiris and Isis. Supposedly, Isis made a wooden replacement.

The phallus was a symbol of fertility, and the god Min was often depicted as ithyphallic, that is, with an erect penis. 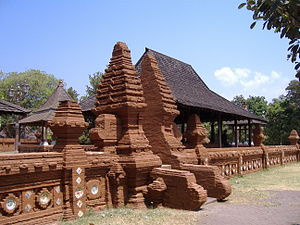 In the nation of Indonesia, the phallic lingga and feminine yoni remain common symbols of harmony. The Sultan's Palace of Kasepuhan, in West Java, has a number of lingga-yoni carvings along its walls.

According to the Indonesian chronicles of the Babad Tanah Jawi, Prince Puger gained the kingly power from God, by ingesting sperm from the phallus of the already-dead Sultan Amangkurat II of Mataram.[5][6]

The Phallus is commonly depicted in its paintings. 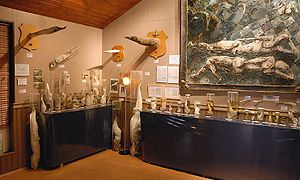 The Mara Kannon Shrine (麻羅観音) in Nagato, Yamaguchi prefecture is one of many fertility shrines in Japan that still exist today. Also present in festivals such as the Danjiri Matsuri (だんじり祭)[7] in Kishiwada, Osaka prefecture, the Kanamara Matsuri, in Kawasaki, and the Hōnen Matsuri (豊年祭 Harvest Festival), in Komaki (小牧市 Komaki-shi), Aichi Prefecture (愛知県 Aichi-ken), though historically phallus adoration was more widespread. 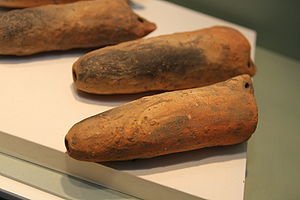 Kuker is a divinity personifying fecundity, sometimes in Bulgaria and Serbia it is a plural divinity. In Bulgaria, a ritual spectacle of spring (a sort of carnival performed by Kukeri) takes place after a scenario of folk theatre, in which Kuker's role is interpreted by a man attired in a sheep- or goat-pelt, wearing a horned mask and girded with a large wooden phallus. During the ritual, various physiological acts are interpreted, including the sexual act, as a symbol of the god's sacred marriage, while the symbolical wife, appearing pregnant, mimes the pains of giving birth. This ritual inaugurates the labours of the fields (ploughing, sowing) and is carried out with the participation of numerous allegorical personages, among which is the Emperor and his entourage.[8] 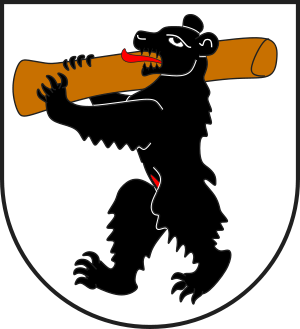 The bear on the arms of Portein, Switzerland has a clearly visible red phallus, in accordance with the long-held tradition.

In Switzerland, the heraldic bears in a coat of arms had to be painted with bright red penises, or would be mocked as being she-bears. In 1579, a calendar printed in St. Gallen omitted the genitals from the heraldic bear of Appenzell, nearly leading to war between the two cantons.[9][10][11]

Figures of Kokopelli and Itzamna (as the Mayan tonsured maize god) in Pre-Columbian America often include phallic content. Additionally, over forty large monolithic sculptures (Xkeptunich) have been documented from Terminal Classic Maya sites with the majority of examples occurring in the Puuc region of Yucatán (Amrhein 2001). Uxmal has the largest collection with eleven sculptures now housed under a protective roof on site. The largest sculpture was recorded at Almuchil measuring more than 320 cm high with a diameter at the base of the shaft measuring 44 cm.[12]

In the Ecclesia Gnostica Catholica, founded by Aleister Crowley, some chapters practice the consumption of semen during the Gnostic Mass.[13]

St. Priapus Church (French: Église S. Priape) is a North American new religion that centres on the worship of the phallus. Founded in the 1980s in Montreal, Quebec, by D. F. Cassidy, it has a following mainly among homosexual men in Canada and the United States. Semen is also treated with reverence and its consumption is an act of worship.[14] Semen is esteemed as sacred because of its divine life-giving power.

The symbolic version of the phallus, a phallic symbol is meant to represent male generative powers. According to Sigmund Freud's theory of psychoanalysis, while males possess a penis, no one can possess the symbolic phallus. Jacques Lacan's Ecrits: A Selection includes an essay titled The Significance of the Phallus which articulates the difference between "being" and "having" the phallus. Men are positioned as men insofar as they are seen to have the phallus. Women, not having the phallus, are seen to "be" the phallus. The symbolic phallus is the concept of being the ultimate man, and having this is compared to having the divine gift of a god.

In Gender Trouble, Judith Butler explores Freud's and Lacan's discussions of the symbolic phallus by pointing out the connection between the phallus and the penis. She writes, "The law requires conformity to its own notion of 'nature'. It gains its legitimacy through the binary and asymmetrical naturalization of bodies in which the phallus, though clearly not identical to the penis, deploys the penis as its naturalized instrument and sign". In Bodies that Matter, she further explores the possibilities for the phallus in her discussion of The Lesbian Phallus. If, as she notes, Freud enumerates a set of analogies and substitutions that rhetorically affirm the fundamental transferability of the phallus from the penis elsewhere, then any number of other things might come to stand in for the phallus.

Modern use of the phallus

The phallus is often used to advertise pornography, as well as the sale of contraception. It has often been used in provocative practical jokes[15] and has been the central focus of adult-audience performances.[16]

The phallus had a new set of art interpretations in the 20th century with the rise of Sigmund Freud, the founder of modern psychoanalysis of psychology. One example is "Princess X"[17] by the Romanian modernist sculptor Constantin Brâncuși. He created a scandal in the Salon in 1919 when he represented or caricatured Princess Marie Bonaparte as a large gleaming bronze phallus. This phallus likely symbolizes Bonaparte's obsession with the penis and her lifelong quest to achieve vaginal orgasm.[18]

See also the Most Phallic Building contest for examples of phallic architecture.