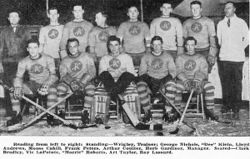 When the NHL Pittsburgh Pirates hockey team moved to Philadelphia in 1930 as the Philadelphia Quakers, they lasted only one season due in part to the fact that the Arrows out-drew them in attendance as well as the NHL club's poor performance on the ice winning just four games (4-36-4) of their 44 game schedule.

The Arrows, like the Ramblers, played at the Philadelphia Arena.