Philadelphia County is a county located in the commonwealth of Pennsylvania. At the 2010 census, the population was 1,526,006,[1] making it the most populous county in the state, despite being the second smallest county in the state by land area. Philadelphia County is one of the three original counties, along with Chester and Bucks counties, created by William Penn in November 1682. Since 1854, the county has been coterminous with the city of Philadelphia, which also serves as its seat.[2] It is the most populous county in the United States coterminous with a municipality.

Philadelphia County is the heart of the Philadelphia-Camden-Wilmington, PA-NJ-DE-MD (Delaware Valley) Metropolitan Statistical Area. The Metropolitan Area ranks 6th most populous in the United States.

Tribes of Lenape were the first known occupants in the area which became Philadelphia County. The first European settlers were Swedes and Finns who arrived in 1638. The Netherlands seized the area in 1655, but permanently lost control to England in 1674. William Penn received his charter for Pennsylvania from Charles II of England in 1681, and in November 1682 divided Pennsylvania into three counties. In the same year Philadelphia was laid out and was made the county seat and the capital of the Province of Pennsylvania.

Penn wanted Philadelphia, meaning "brotherly love", to be a place where religious tolerance and the freedom to worship were ensured.[3] Philadelphia's name is shared with the ancient Asia Minor city spared in the Book of Revelation in the Bible. It was William Penn's prayer, as a Quaker, that his "Holy Experiment"[4] would be found blameless at the Last Judgment.

When established, Philadelphia County consisted mainly of the area from the Delaware River west between the Schuylkill River to the south and the border with Bucks County to the north; the western boundary was undefined. Two counties would be formed out of Philadelphia County, Berks County which was formed in 1752 (from parts of Chester, Lancaster, and Philadelphia counties), and Montgomery County established in 1784. From these separations, as well as other border moves, come the present day boundaries of the county.

The City of Philadelphia, as laid out by Penn, comprised only that portion of the present day city situated between South and Vine Streets and the Delaware and Schuylkill Rivers. Other settlements were made beyond the boundaries of the city, and in the course of time they became separately incorporated and had separate governments.

Several of these settlements were situated immediately contiguous to the "city proper" of Philadelphia such as Southwark and Moyamensing in the south, the Northern Liberties District, Kensington, Spring Garden and Penn District to the north, and West Philadelphia and Blockley to the west — which combined with the City of Philadelphia formed practically one continuously built up town, the whole group being known abroad simply as Philadelphia.

Besides these, there were a number of other outlying townships, villages and settlements throughout the county. Over time, as the population expanded out from the City of Philadelphia, those closer to the City of Philadelphia became absorbed in the congeries of towns of which greater Philadelphia was composed, while those further away from the city often joined with other townships, villages and settlements to form the newer counties of Berks and Montgomery.

The city-county consolidation was a result of the inability of a colonial-type government by committees to adapt to the needs of a growing city for new public services, for example, better streets, police, transportation, sanitation and schools.

The newly integrated districts had marked characteristics between them, but over time, after the consolidation, these characteristics generally integrated into the City of Philadelphia known today. Today, the names of some of these districts are synonymous with neighborhoods in the city, with their boundaries roughly matching their historic boundaries.

In 1951, a new initiative called the Home Rule Charter fully merged city and county offices. This new charter provided the city with a common structure and outlined the "strong mayor" form of government that is still used today.

Philadelphia has become racially and ethnically diverse over the years, and this process continues. Since 1990, (the year that immigration began increasing), thousands of immigrants from Latin America, Asia and Europe have arrived in the county. Today, the city has some of the largest Irish, Italian, German, Polish, Puerto Rican, Korean, Vietnamese, Russian, Ukrainian, Jamaican, Chinese, Arab, Thai and Cambodian populations in America. The county has the fourth largest concentration of African Americans in North America, including large representations of Liberians, Nigerians, and Sudanese. The Northeast section of the city, and more significantly the suburbs of Philadelphia, contain vast numbers of Indian Americans and Mexicans.

According to the U.S. Census Bureau, the county has a total area of 143 square miles (370 km2), of which 134 square miles (350 km2) is land and 8.6 square miles (22 km2) (6.0%) is water.[5] It is the second-smallest county in Pennsylvania by area. Bodies of water include the Delaware River, Schuylkill River, Cobbs Creek, Wissahickon Creek, and Pennypack Creek.

Currently, Philadelphia County has no government structure. Prior to the Act of Consolidation in 1854 a Board of Commissioners governed the county in accordance with the law of Pennsylvania at the time.

The origins of the Board of Commissioners are found in the office of Tax Assessor in Philadelphia County, established by an Act of the Pennsylvania General Assembly on November 27, 1700. Tax Assessor was an office of six persons, elected annually to estimate the County's fiscal needs, to make an assessment and levy a tax to meet them, and to appoint its collectors and the County Treasurer.

On March 28, 1710, the Assembly approved an act that created an appointed Board of County Commissioners, which was changed to a notable elected board in 1725. The Commissioners were empowered to demand accountings of the Assessors and Collectors and to appoint new collectors if necessary. Subsequent acts passed by the Assembly in 1715, 1718 and 1722 expanded the power and the scope of the Board, granting the Commissioners authority to share with the assessors in the assessment process and in the allocation of tax receipts among the various county projects, to take part in the appointment of the County Treasurer, and to issue warrants and levy fines against delinquent taxpayers and collectors. Other Acts passed during the eighteenth century gave the Commissioners regulatory powers and maintenance functions in regard to county lands, roads, bridges, wharves and landings, courts and the county prison.

In 1780, the Assembly passed an Act that abolished the Board of County Assessors and left its functions in the hands of the Commissioners alone, who continued to appoint the assessors and collectors of each of the county's boroughs, townships and districts. Further legislation in 1799 and 1805 formally established the Commissioners' functions of furnishing lists of voters to election officers and aiding the Sheriff in the selection of jurors, as both were based upon lists of taxpayers. During the first half of the nineteenth century, the Commissioners' duties were further increased to include the leasing of polling places, the provision of ballot boxes, and related duties.

Even though the governments of both the City and County were effectively consolidated by the Act of Consolidation, not all offices and agencies, such as the Board of Inspectors of the County Prison (Philadelphia Prison System), Coroner, Recorder of Deeds, and Sheriff, that were under the control of the county prior to the consolidation were transferred to the city, though their oversight and regulation were now handled by the City Commissioners. Other offices and agencies, like that of Offices of City Tax Collector and County Tax Collector were reduced to that of clerk in the new office of Receiver of Taxes. Both Commissioners' (City and County) powers in regard to streets and City property were transferred to the City's Departments of Highways and City Property. From 1854 until 1867, the Commissioners also served as members of the Board of Revision of Taxes. In 1867, the City Assessors were made appointees of that Board.

The powers left to the Commissioners were chiefly accounting ones over County institutions, regulatory duties regarding weights and measures (given them by an Act of 1895) and administrative functions in connection with elections, which culminated in complete control of their conduct with the formation of the County Board of Elections under their direction in 1937.

Although not mentioned in the Philadelphia Home Rule Charter, the City Commissioners' Office became part of the City government by way of the 1951 City-County Amendment to the State Constitution. In addition, the 1963 amendment to the First Class Cities Home Rule Act gave City Council the power to pass legislation with regard to operations of the City Commissioners' Office. The 1965 City-County Consolidation Ordinance of City Council further enabled these enactments.

Philadelphia County is by far the most Democratic county in Pennsylvania. In 2004, John Kerry received 542,205 votes (80%) to 130,099 votes (19%) for George W. Bush, making it Kerry's strongest county in the state, which he narrowly won. The county has voted for the Democrat in every presidential election since 1932. In 1972, it was the only county in the state to vote for George McGovern over Richard Nixon. Even Republican Senator Arlen Specter, a Philadelphia resident, did not receive one third of the Philadelphia vote in 2004, which he won easily; however, Specter switched to the Democratic Party in 2009 and was defeated in the 2010 Democratic Primary. 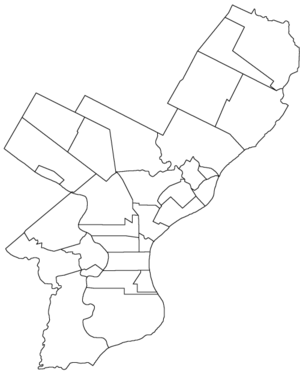 The following districts, townships, and boroughs existed in Philadelphia County before the Act of Consolidation in 1854: