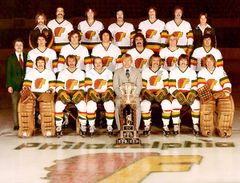 The 1976-77 Philadelphia Firebirds with the Lockhart Cup.

The Philadelphia Firebirds were a minor league professional ice hockey team that played in Philadelphia, Pennsylvania, from 1974 to 1979.

From 1974 to 1977 the Firebirds were a member club of the North American Hockey League winning the league's Lockhart Cup play-off championship in 1976. The Firebirds featured several key players during their time in Philadelphia. Goaltender Rejean Lemelin moved on from the Firebirds to a long career with Calgary and Boston in the NHL. The tandem of center Bobby Collyard and right wing Gordie Brooks were consistently among the leading scorers in both the NAHL and AHL during their Firebird careers. The Head Athletic Trainer from 1977–1980, Marty Ward, is currently the Head Trainer for the Iroquois Nationals Lacrosse team and has been since 2006. He is also Head Trainer for the Onondaga Red Hawks Box lacrosse team, since 2010.

When the NAHL folded in 1977, the Firebirds, along with the Broome Dusters, joined the then-struggling American Hockey League. The Firebirds played all five seasons in Philadelphia (three NAHL and two AHL seasons) at Convention Hall, which has since been torn down. The Firebirds were affiliated with the NHL Detroit Red Wings in 1977–78 and the Colorado Rockies in 1978–79.

Following the 1979 season, the franchise moved to Syracuse, New York, where the club played one final season as the Syracuse Firebirds before folding.