The Philadelphia Giants were a Negro league baseball team that played from 1902 to 1911. From 1904 to 1909 they were one of the strongest teams in black baseball, winning five eastern championships in six years. The team was organized by Sol White, H. Walter Schlichter,[1] and Harry Smith.

In 1902, white sportswriter H. Walter Schlichter joined with long-time Negro league player Sol White and Harry Smith, sports editor of the Philadelphia Tribune (an African-American newspaper), to organize the Philadelphia Giants. Schlichter arranged for the team to play in the major league Columbia Park when the Philadelphia Athletics were on the road. Sol White would play shortstop and manage the team. For their first season, the team recruited several star players including catcher Clarence Williams, second baseman Frank Grant, and pitcher John Nelson. The 1902 Philadelphia Giants compiled a win-loss-tie record of 81–43–2. Throughout the season the Giants issued challenges to the Cuban X-Giants to compete in a Negro league championship series, but the X-Giants declined. In October, their first season culminated with a two-game series against the American League champion Philadelphia Athletics. The Athletics won both games, 8–3 and 13–9.[2]

In 1903, White acquired Harry Buckner, William Binga, Robert Footes, Bill Monroe and John W. Patterson. Attendance grew and in September the Giants again challenged the Cuban X-Giants for a championship series. This time the challenge was accepted and games were scheduled for New York, Philadelphia, and Harrisburg. The Cuban X-Giants beat Philadelphia behind outstanding pitching by Rube Foster.[3] 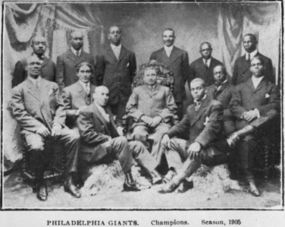 The next season White recruited Foster, outfielder Pete Hill, and pitcher Danny McClellan for the Giants, and a dynasty took shape. With the Giants' growing popularity and to avoid working around the Philadelphia Athletics' schedule, they leased their own home stadium at Broad Street and Jackson Avenue in Philadelphia. A second "World's Colored Championship" was determined by a best-of-three series in September. Foster beat the Cuban X-Giants in both the first and the decisive third games for Philadelphia's first championship.[4]

In 1906 the Giants joined a multiracial baseball league, the International League of Independent Professional Base Ball Clubs. In September they once again faced and defeated the Cuban X-Giants, thereby winning both the National Association championship and another "World's Colored Championship". Subsequently they played two games with the Philadelphia Athletics, losing both to outstanding pitching performances by Hall of Fame players Eddie Plank and Rube Waddell.[5]

In 1907, they joined the first organized black professional league of the twentieth century, the National Association of Colored Baseball Clubs of the United States and Cuba.[1] Rube Foster, Pete Hill, and three other players left the Giants to join the Leland Giants in Chicago. With young John H. Lloyd taking over at shortstop, however, the Philadelphia Giants continued to field an excellent team and won their fourth consecutive eastern championship. In October they toured Cuba and went 10–12–1 against Habana and Almendares.

In 1908 the first black championship series between the east and west was played, as the Leland Giants played the Philadelphia Giants in a "World Series." The series ended with a 3–3 tie; it is not known why the deciding seventh game was not played. In 1909 Spottswood Poles joined the team and the Giants won another eastern championship.[6]

In 1909, White broke with Schlichter and left the Giants to take the reins of the Quaker Giants. In 1910, Lloyd also left and the Giants were no longer contenders for championships. Riley writes, "...after the end of the decade many of Philadelphia's remaining star players defected to other teams. The Giants' caliber of play dropped significantly as they rapidly became a minor team. Although a club continued on into the 1920s with the same name, that team cannot be equated with the original franchise."[7]

Lanctot says the team disbanded during the 1911 season, forced by player defections (citing the New York Age of August 3, evidently). The new Lincoln Giants of New York City had signed "several players, including Louis Santop and Dick Redding". Many clubs claimed the tradition: by 1914 there were North, South, East, and West versions of "Philadelphia Giants" and also "East End Giants of Germantown". [8]