The Philadelphia Quakers were an American professional ice hockey team that played only one full season in the National Hockey League (NHL), 1930–31, at the Philadelphia Arena in Philadelphia, Pennsylvania. They were the successors of the Pittsburgh Pirates. 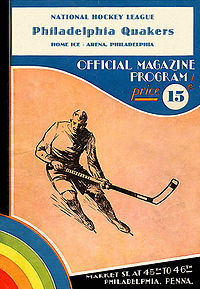 The Pirates, the third American-based NHL team, got off to a promising start in 1925–26, making the playoffs in two of their first three seasons. However, the team soon fell on hard times both on the ice and at the box office. A sale to bootlegger Bill Dwyer did not help the cause. With the stock market crash of 1929 followed by the Great Depression, the owners found themselves having to sell off their star players to make ends meet. By the end of the 1929–30 season, the team was $400,000 in debt, and their arena, the Duquesne Gardens, was not suitable for an NHL team. Boxing promoter Benny Leonard, Dwyer's front man, then requested permission to temporarily move to Philadelphia as the Quakers (from the historical importance of the Quaker religious community in the founding of Philadelphia and Pennsylvania) until a new arena was built in Pittsburgh. 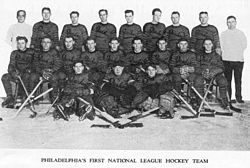 Things did not get better on the other side of Pennsylvania. The financial woes continued unabated. On the ice, the Quakers were the definition of futility. It took the team three games to score a goal and three more to get its first win, which came on November 25, a 2–1 win over the visiting Toronto Maple Leafs. They finished with a horrendous 4–36–4 record. The .136 winning percentage was the lowest in NHL history, a record that would stand for 45 years until the Washington Capitals finished with a .131 winning percentage in 1974–75. The four wins tied the 1919–20 Quebec Bulldogs for the fewest wins in NHL history for a team that played a full season. They had the worst offense (76 goals for) and worst defense (184 goals against) in the league. At the end of that season (1930–31), the Quakers, along with the Ottawa Senators, announced that they would not field a team for the 1931–32 NHL season, leaving Philadelphia without an NHL team until the arrival of the Flyers in 1967. The Flyers would adopt the orange and black colors used by the Quakers.

While the Senators came back for 2 years before moving to St. Louis, the Quakers franchise never iced a team again. At each of the next five season-opening NHL governors meetings, they announced that they were suspending operations for that season. They officially canceled the franchise on May 7, 1936, when a new arena in Pittsburgh was no longer evident. Pittsburgh would not see a new arena until 1961, when the Civic Arena (now Mellon Arena) was constructed. The NHL returned to Pittsburgh the same year it returned to Philadelphia with the arrival of the Penguins. 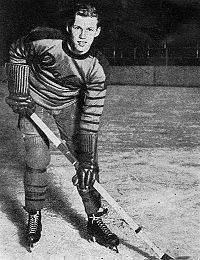 Twenty-three players — three goaltenders and twenty skaters — played for the Quakers during their lone season of existence. Syd Howe, who played his first full NHL season with the Quakers, was the last active Quaker playing his final NHL games with the Detroit Red Wings during the 1945–46 season. Howe was also the only Quakers' player inducted into the Hockey Hall of Fame. Quakers' coach J. Cooper Smeaton was inducted in the Hall of Fame in 1961 as an on-ice official based on his two decades as the NHL's Referee in Chief and he also served as Trustee of the Stanley Cup from 1946 until 1978. Hib Milks was the Quakers only captain.