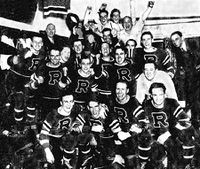 The Philadelphia Ramblers were a minor professional ice hockey team based in the Philadelphia Arena in Philadelphia, Pennsylvania. The Ramblers played for six seasons during the infancy of the American Hockey League from 1935 to 1941.

From 1935 through 1941 the team was the primary minor league affiliate of the New York Rangers and many future and aging Ranger stars (such as Bert Gardiner and Larry Molyneux) played for the Ramblers. The Rangers ended the agreement after the 1940–41 season. The team changed its name to the Philadelphia Rockets for the 1941–42 season, which turned out to be their final season.