In 1934, led by 20-year-old left-hander Slim Jones, the Stars defeated the Chicago American Giants in an exciting playoff series, four games to three, for the Negro National League pennant. At their high point in mid-1930s, the team starred such greats as Biz Mackey, Jud Wilson, and Dick Lundy. Following his release by Cleveland, Satchel Paige signed with the Stars in July 1950, before returning to the Majors with Bill Veeck and the St. Louis Browns.

The club disbanded after the 1952 season. The Philadelphia Phillies have celebrated and honored the Stars in recent years. The African American Museum in Philadelphia maintains the "William Cash/Lloyd Thompson Collection" of Stars and Hilldale Club scorebooks, photographs, and correspondence.[1]

Ed Bolden organized the Philadelphia Stars who played their first season in 1933. The Negro National League was composed primarily of mid-western teams in 1933 and many east-coast clubs were independent. The Stars were originally one such unaffiliated club and primarily played against local white semi-professional and professional teams. For example, by June 1933, the Stars' only games against black teams had been against the Philadelphia Bacharach Giants and the Pittsburgh Crawfords.[2]

The Stars won the 1934 Negro National League Championship by beating the Chicago American Giants 4-3-1 in a best of seven game series. The championship series, however, was beset by problems.

The first four games of the best-of-seven series were played in Chicago. The games went smoothly and Chicago won three of four.[4] But game 5 was delayed by 10 days for unexplained reasons. When the Series resumed in Philadelphia, the Stars won game 6 to tie the series but did so amidst controversy.

Early in game 6, Stars’ third-baseman Jud Wilson seemed to hit umpire Bert Gholston which should have meant immediate ejection. Over the protest of Chicago manager Dave Malarcher, Gholston refused to eject Wilson. Later in the game, Stars catcher Ameal Brooks pushed another of the umpires who also refused to eject the Stars player.

Prior to game 7, Malarcher filed a protest with NNL Commissioner Rollo Wilson over Jud Wilson's actions. The Commissioner met with the team owners and umpires. Gholston claimed he had wanted to eject Wilson but was threatened by Stars players and intimidated into allowing Wilson to play. Stars owner Bolden threatened not to play game 7 if Jud Wilson was suspended and the Commissioner buckled under the pressure.

The teams played game 7 on October 1 at Passon Field. The game ended in a 4-4 tie due to darkness. Game 8 was played the following day and Slim Jones pitched the Stars to a 2-0 victory and the championship.

Both the Stars and Giants filed protests over games 7 and 8. Giants player Turkey Stearnes hit an umpire and controversy hung over the series. The Stars claimed the Giants had used ineligible players. The Giants protested that two games should not have been played at night. Nevertheless, the Stars championship was upheld by the league.[2]

The Stars were founded and organized by Ed Bolden. Bolden had owned the Hilldale Club Negro league ballclub that won the Eastern Colored League pennant in 1923, 1924, and 1925, and which beat the Kansas City Monarchs in the Negro League World Series in 1925. Bolden was also a founder of the ECL. Bolden was instrumental in building the Stars' 1934 championship club and ran the team until his death in 1950.[5]

After Bolden's death, his ownership passed to his daughter, Hilda Bolden Shorter. Shorter ran the club through 1952.[6]

The team was financed, and owned in part by sports promoter Eddie Gottlieb who also owned the Philadelphia Sphas and Philadelphia Warriors basketball teams. Gottlieb leased Penmar Park from the Pennsylvania Railroad for use by the Stars. In addition to the Stars, Gottlieb was the booking agent for all the Negro league teams in the Northeast, taking 10-percent of gate receipts for his work.[7]

The team played at Passon Field during the 1934 and 1935 seasons. Passon Field was located at the current site of West Philadelphia High School's athletic field (baseball and football) now called Pollock Field and was the former home of the Philadelphia Bacharach Giants. In 1936, the Stars moved to 44th and Parkside Ballpark where they played the majority of their home games through 1947 when they lost their lease.[8] The Stars often played on Monday nights at Shibe Park which had a higher seating capacity and which was located in North Philadelphia.[7] The New York Times reported that the Stars had their largest crowd at Shibe Park in June 1943 when they beat the Kansas City Monarchs in front of 24,165.[9]

After 1947, the Stars played home games at area ballparks including Wilmington Park in Delaware, home of the Wilmington Blue Rocks minor-league team.[10]

The Stars did not have an official team logo as professional and collegiate teams have today. It was not common practice for teams to have such standardized team symbols in the 1930s and 1940s. The Stars wore uniforms with red and navy blue decoration. The cap most commonly associated today with the Stars is their 1938 cap, seen above, which has a navy crown, red brim, and white star with a red sanserif P. For most of their history, they wore a white cap with a red brim, and red sanserif P as seen to the left.[11] Another style cap worn by the Stars was an all navy cap with a red P.

The Negro Leagues Baseball Museum (NLBM) created a series of team logos in the 1990s for the well-known Negro league teams so that the NLBM could license such logos and collect royalties for their use on merchandise. Such revenue helps sustain the museum. The Stars were one such team for which a contemporary logo was created. It is seen on NLBM-licensed Stars merchandise and while it supports the educational efforts of the Museum, it is not a historical logo.[12]

The Negro League Baseball All-Star Game was called the East-West Game. Players were not divided by league, but by geographical location; Stars players played for the East. Players were voted to the teams by the fans with votes tallied by the Chicago Defender and the Pittsburgh Courier newspapers.

These Philadelphia Stars appeared in the All-Star game for the East team. Only players from the Pittsburgh Crawfords and Washington Elite Giants played for the East in the 1936 game. Two games were played in 1939, 1942, and 1946–1948.[13]

While none of these players were enshrined in Cooperstown with a Stars cap, each of them was a part of the Philadelphia Stars franchise at one point in his career.

Stars co-owner Eddie Gottlieb was inducted into the Basketball Hall of Fame in 1972.[14]

Public recognition began to come to Philadelphia Stars in early 1990s. The Philadelphia Phillies and local community groups recognize the legacy of the club .

On June 28, 1997, the Philadelphia Phillies played the Atlanta Braves at Turner Field in Atlanta. In honor of the 50th anniversary of Jackie Robinson breaking professional baseball's color-line, the Braves hosted a Turn Back the Clock game. The Braves wore 1938 Atlanta Black Crackers home uniforms and the Phillies wore 1938 Stars road uniforms.[15] 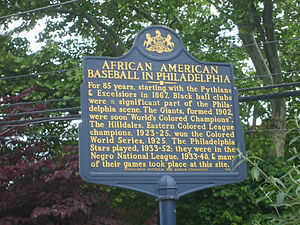 Prior to its 2008 First-Year Player Draft, Major League Baseball held a ceremonial draft of surviving players from the Negro leagues to honor those players excluded from organized professional baseball. Every team in Major League Baseball selected a player whose career encompassed the Negro leagues.[16] Former Stars players who participated in the draft were Walter Lee Gibbons, a pitcher who pitched briefly for the Stars in 1941 and was selected by the Tampa Bay Rays, pitcher Harold Gould selected by the Toronto Blue Jays, and infielder Mahlon Duckett who was selected by the Phillies.[17]

Negro league players who had signed with Major League organizations were not eligible for the ceremonial Draft. Former Stars players Bill Cash had played in the organization of the Chicago White Sox and Stanley Glenn had played in the Boston Braves' minor-league system. The Phillies chose to include Cash and Glenn in the Draft celebrations by recognizing the two players prior to their June 5, 2008 game against the Cincinnati Reds at Citizens Bank Park. The Phillies presented Cash and Glenn with new Phillies jerseys while Gould and Duckett were at the MLB Draft.[18] 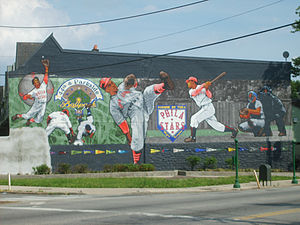 Today at 44th and Parkside is a Negro leagues memorial park. In 2004, West Philadelphia's Business Association of West Parkside led a coalition of local groups in building the park. The Philadelphia Building Trades Council donated $150,000 in labor to help build the park in which the memorial statue, Pennsylvania historical marker, and Stars mural are now located.[19]

A Negro Leagues Memorial Statue stands today at 44th and Parkside in tribute to the ballplayers who played at the site. The Phillies hosted the dedication of the statue on June 18, 2003 at Veterans Stadium. Mayor John Street and Phillies shortstop Jimmy Rollins attended the unveiling of the statue, along with the then living members of the Stars, Bill Cash, Mahlon Duckett, Stanley Glenn, Harold Gould, and Wilmer Harris. The Phillies committed to pay for the maintenance and upkeep of the statue for a period of 10 years.[20]

During the summer of 2004, coach Steve Bandura at the Marian Anderson Recreation Center in Southwest Center City organized a youth baseball team of Philadelphia teenagers of different ethnic and racial backgrounds which he named the Philadelphia Stars after the original Negro league club. Bandura led the team on a 20-day, 15-city, 3,700-mile tour called the "Philadelphia Stars Throw Back Tour '04". The trip was sponsored by the Philadelphia Department of Recreation and Major League Baseball-licensee Mitchell & Ness. The team traveled on a c.-1947 bus which Mitchell & Ness purchased for the tour. The team visited with the living members of the Philadelphia Stars in Philadelphia, the Negro Leagues Baseball Museum in Kansas City, the National Baseball Hall of Fame in Cooperstown, Jackie Robinson's grave in Brooklyn, and the College World Series in Omaha, Nebraska. The team received national press coverage for the trip.[21]