Philip proved indecisive, soft in nature, and timid. The strong personalities of his parents apparently crushed him, and policies of his father dominated him. People called him "the Bold" on the basis of his abilities in combat and on horseback and not on the basis of his political or personal character. He was pious but not cultivated. He followed the suggestions of others, first of Pierre de La Broce and then of his uncle King Charles I of Naples, Sicily, and Albania.

His father, Louis IX, died in Tunis during the Eighth Crusade. Philip, who was accompanying him, came back to France to claim his throne and was anointed at Reims in 1271.

Philip made numerous territorial acquisitions during his reign, the most notable being the County of Toulouse which was annexed to the Crown lands of France in 1271. Following the Sicilian Vespers, a rebellion trigered by Peter III of Aragon against Philip's uncle Charles I of Naples, Philip led an unsuccessful Aragonese Crusade in support of his uncle. Philip was forced to retreat and died from dysentry in Perpignan in 1285. He was succeeded by his son Philip the Fair.

Philip was born in Poissy to King Saint Louis IX of France[2] and Margaret of Provence, queen consort of France. As a younger son, Philip was not expected to rule a kingdom. At the death of his elder brother Louis in 1260, he became the heir to the throne. He was then 15 years old and has less skill than his brother, being of a gentle character, submissive, timid and versatile, almost crushed by the strong personalities of his parents.

His mother Margaret made him promise to remain under her tutelage until the age of 30, but his father King Louis had him released from this oath by the pope, preferring to improve his son through education. Pope Urban IV released Philip from his oath on June 6, 1263. From 1268 Pierre de La Brosse became mentor. Saint Louis also provided him his own advice, writing in particular Enseignements, which inculcate primarily the notion of justice as the first duty of the king. He also received a very faith-oriented education. Guillaume d'Ercuis was also his chaplain before being the tutor of his son, the future king Philip IV.

Following the Treaty of Corbeil (1258), concluded on March 11, 1258 between James I of Aragon and his father, Philip was married in 1262 to Isabella of Aragon in Clermont by the archbishop of Rouen Eudes Rigaud. As Count of Orléans, he accompanied his father to the Eighth Crusade in Tunis, 1270. Shortly before his departure, St. Louis had given the regency of the kingdom into the hands of Mathieu de Vendôme and Simon II de Clermont-Nesle, Count of Clermont, to whom he had also entrusted the royal seal. After taking Carthage, the army was struck by an epidemic of dysentery, which spared neither Philip nor his family. His brother John Tristan, Count of Valois died first, on August 3, and on August 25 the king died.[3] To prevent putrefaction of the remains of the sovereign, they recoursed to Mos Teutonicus.

Philip, then 25 years old, was proclaimed king in Tunis. With neither great personality or will, very pious, but a good rider, he owed his nickname of "Bold" to his valor in combat than strength of character. He was unable to command the troops at the death of his father. He left his uncle Charles I of Naples to negotiate with Muhammad I al-Mustansir, Hafsid Sultan of Tunis; there was a truce of ten years which allowed him to return to France. He got the payment of tribute from the caliph of Tunis in exchange for the departure of the crusaders. A treaty was concluded October 28, 1270 between the kings of France, Sicily and Navarre and the barons on one hand and the caliph of Tunis on the other.

Other deaths followed this debacle. In December, in Trapani, Sicily, the brother-in-law of Philip, King Theobald II of Navarre is dead. He was quickly followed to the grave by Philip's sister Isabella. Finally, a month later, in Calabria, his wife Isabella, while pregnant with their fifth child, fell off her horse. She broke her spine, miscarried and died in terrible pain at Cosenza.

Philip III arrived in Paris on May 21, 1271, and made foremost tribute to the deceased. The next day the funeral of his father was held. The new sovereign was crowned King of France in Reims 15 August 1271.

Alphonse, Count of Poitiers and Toulouse, uncle of the newly crowned king Philip III, returning from the crusade, died childless in Italy on 21 August 1271. Philip inherited the counties from his uncle and united them to the Crown lands of France, the royal demesne. His inheritance included a portion of Auvergne, then the Terre royale d'Auvergne, later the Duchy of Auvergne. In accordance with wishes of Alphonse, he granted the Comtat Venaissin to Blessed Pope Gregory X in 1274. This inheritance also included the Agenais. Several years of negotiations yielded the Treaty of Amiens (1279) with King Edward I of England, which restored this territory to the English.

King Philip III of France meanwhile supported policy of his uncle, King Charles I of Naples, Sicily, and Albania, in Italy.

King Peter II of Aragon in 1205 put under his realm the suzerainty of the pope. Pope Martin IV excommunicated king Peter III of Aragon, the conqueror, and declared his kingdom forfeit.[4] The pope then granted Aragon to Charles, Count of Valois, son of Philip III, king of France.

Joan I of Navarre, daughter of the deceased king Henry I of Navarre, reigned as queen regnant of Navarre. Philip IV of France, son of Philip III and heir to the French throne, took her as his wife in 1284 per the Treaty of Orléans signed by Philip III and Joan's mother, Blanche of Artois. 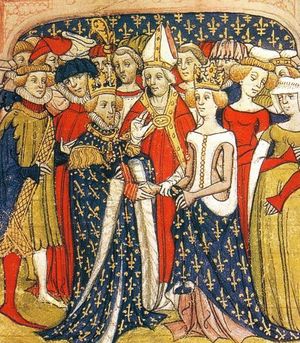 Marriage of Philip and Marie of Brabant, Queen of France

Philip III of France in 1284 responded to the Sicilian Vespers in support of his partially dethroned uncle. With his sons, the king entered Roussillon at the head of a large army on the ultimately unsuccessful Aragonese Crusade. The war took the name "crusade" from its papal sanction; nevertheless, one historian labelled it "perhaps the most unjust, unnecessary and calamitous enterprise ever undertaken by the Capetian monarchy.".[5] On 26 June 1285, Philip III the Bold entrenched himself before Girona in an attempt to besiege the city. Despite the strong resistance, the French took Girona on 7 September 1285.

Philip quickly experienced a reversal, however, as an epidemic of dysentery hit hard the French camp. The disease afflicted king Philip III personally. The French retreated, and the Aragonese enemy handily defeated the French at the Battle of the Col de Panissars on 1 October 1285.

Philip III died of dysentery in Perpignan, the capital of his ally James II of Majorca, on 5 October 1285. His son, Philip IV of France the Fair, succeeded him as king of France. The attempt of Philip to conquer Aragon nearly bankrupted the French monarchy, causing challenges for his successor.[6]

Following the Mos Teutonicus custom, his body was divided in several parts buried in different places : the flesh was sent to the Narbonne Cathedral, the entrails to La Noë abbey in Normandy, his heart to the now-demolished church of the Couvent des Jacobins in Paris and his bones to Basilica of St Denis, at the time north of Paris.[7]

In Divine Comedy, Dante envisions the spirit of Philip outside the gates of Purgatory with a number of other contemporary European rulers. Dante does not name Philip directly, but refers to him as "the small-nosed"[8] and "the father of the Pest of France," a reference to king Philip IV of France.

On 28 May 1262, Philip married Isabella of Aragon, Queen of France, daughter of King James I of Aragon and his second wife Yolande of Hungary.[9] They had the following children:

After death of queen consort Isabella, he married on 21 August 1274 Marie of Brabant, Queen of France, daughter of the late Henry III, Duke of Brabant, and Adelaide of Burgundy, Duchess of Brabant. Their children were: