From Infogalactic: the planetary knowledge core
Jump to: navigation, search
"Lord Snowden" redirects here. For another spelling, see Earl of Snowdon. For Baron of Snaudon, see Duke of Edinburgh.

Philip Snowden, 1st Viscount Snowden PC (/ˈsnoʊdən/; 18 July 1864 – 15 May 1937) was a British politician. A strong speaker, he became popular in trade union circles for his denunciation of capitalism as unethical and his promise of a socialist utopia. He was the first Labour Chancellor of the Exchequer, a position he held in 1924 and again between 1929 and 1931. He broke with Labour policy in 1931 and was expelled from the party and excoriated as a turncoat, as the Party was overwhelmingly crushed in 1931 by the National Government coalition that Snowden supported.

Snowden was born in Cowling in the West Riding of Yorkshire. His father John Snowden had been a weaver and a supporter of Chartism and then a Gladstonian liberal. Snowden later wrote in his autobiography: "I was brought up in this Radical atmosphere, and it was then that I imbibed the political and social principles which I have held fundamentally ever since".[1] Although his parents and sisters were involved in weaving at the Ickornshaw Mill he did not join them, after attending a local board school (where he received additional lessons in French and Latin from the schoolmaster) he stayed on as a pupil-teacher.[2] When he was 15 he became an insurance office clerk in Burnley.[2] During his seven years as a clerk he studied and then passed the civil service entry examination, and in 1886 he was appointed to a junior position at the Excise office in Liverpool.[2] Snowden moved on to other posts around Scotland and then to Devon.[2]

In August 1891 in Devon when he was aged 27, Snowden severely injured his back in a cycling accident and was paralysed from the waist down.[2] He learned to walk again with the aid of sticks within two years.[3] Following the accident his Inland Revenue job was kept open for him for two years but due to his condition he decided to resign from the civil service.[2] While he was convalescing at his mother's house at Cowling he began to study Socialist theory and history.[2]

Snowden joined the Liberal Party and followed his parents in becoming a Methodist and a teetotaller. In 1893 Snowden was asked to give a speech for the Cowling Liberal Club on the dangers of socialism in the aftermath of the formation of the Independent Labour Party in neighbouring Bradford. In his research on socialism Snowden instead became convinced by the ideology. He eventually joined the executive committee of the Keighley ILP in 1899 and went on to chair the ILP 1903-06. He became a prominent speaker for the party and wrote a popular Christian socialist pamphlet with Keir Hardie entitled The Christ that is to Be in 1903. His strident rhetoric, well-laced with statistics and evangelical themes, contrasted the evil conditions under capitalism with the moral and economic utopia of future socialism. He condemned as "bloodsuckers and parasites" local textile company executives. In 1898 he launched the Keighley Labour Journal, using it to denounce waste, pettiness, and corruption. However, he ignored the concerns of the trade unions, which he judged to be conservative and fixated on wages.[3] By 1902 he moved his base to Leeds and toured Britain as a lecturer on politics and corruption, with his own syndicated column and short essays in numerous working class outlets. By the time he was elected Labour MP for Blackburn in 1906 he had become a well-known socialist figure, standing at the national level alongside both Keir Hardie, Professor Arnold Lupton and Ramsay MacDonald.[3][4]

In 1905 Snowden married Ethel Annakin, a campaigner for women's suffrage. Snowden supported his wife's ideals and he became a noted speaker at suffragette meetings and other public meetings.[3]

Snowden unsuccessfully contested the Wakefield constituency in West Yorkshire in a by-election in March 1902, where he received 40 percent of the votes.[5] In 1906 he became the Labour Party MP for Blackburn. He continued his writing and lectures, and now was advocating more radical measures than the ruling Liberals were implementing. He even devised his own "Socialist budget" to rival David Lloyd George's 1909 "People's Budget".[3]

Snowden was in Australia on a worldwide lecture tour when the First World War broke out in August 1914; he did not return to Britain until February 1915. He was not a pacifist but he did not support recruiting for the armed forces and he campaigned against conscription. His stance was unpopular with the public and he lost his seat in the 1918 general election. In 1922 he was elected to represent Colne Valley.[3]

Chancellor of the Exchequer: 1924

Upon Ramsay MacDonald's appointment as Prime Minister in January 1924, Snowden was appointed as the Labour Party's first ever Chancellor of the Exchequer and sworn of the Privy Council.[6]

In his budget, Snowden lowered the duties on tea, coffee, cocoa, chicory and sugar; reduced spending on armaments; provided money for council housing. However, he did not implement the capital levy. Snowden claimed that because of the lowering of duties on foodstuffs consumed by the working class the budget went "far to realize the cherished radical idea of a free breakfast table".[7] He profoundly believed in the morality of the balanced budget, with rigorous economy and not a penny wasted. He never grasped how serious unemployment was becoming. A. J. P. Taylor said his budget "would have delighted the heart of Gladstone".[8]

In his first budget, Snowden earmarked £38 million for the reduction of food taxes, the introduction of pensions for widows, and a reduction in the pensionable age to 65. However, only the first of these measures was realised during the First Labour Government's time in office.[9]

Although he had chaired the ILP for a second time, from 1917 to 1920, Snowden resigned from the party in 1927 because he believed it was "drifting more and more away from...evolutionary socialism into revolutionary socialism". He was also opposed to the new Keynesian economic ideas and criticised its expression in the Liberals' manifesto for the 1929 election, titled We can Conquer Unemployment.[3]

Snowden was again appointed Chancellor after Labour formed a government in 1929 after emerging as the largest party in the general election.[10] His economic philosophy was one of strict Gladstonian Liberalism rather than socialism. His official biographer wrote, "He was raised in an atmosphere which regarded borrowing as an evil and free trade as an essential ingredient of prosperity".[11]

He was considered by many at the time and later as being the principal opponent to the government following any radical economic policy to tackle the Great Depression as well as blocking proposals to introduce protectionist tariffs. The government eventually collapsed over arguments about a budget deficit amidst refusals by a significant minority of ministers to enact cuts in unemployment benefit.[12]

Snowden retained the position of Chancellor during the National Government of 1931. As a consequence he was expelled from the party, along with MacDonald and Jimmy Thomas. In a BBC radio broadcast on 16 October 1931, he called Labour's policies "Bolshevism run mad" and contrasted them unfavourably with his own "sane and evolutionary Socialism".[13] Snowden decided not to stand for parliament in the election of November 1931. In that election Labour seats declined catastrophically from 288 to 52. It was during that year he had prostate gland surgery, following which his health and mobility declined.[3]

Skidelsky is representative of the Keynesians who have charged that Snowden and MacDonald were blinded by their economic philosophy that required balanced budgets, sound money, the gold standard and free trade, regardless of the damage it might do to the economy and the people.[14] However, with the decline of Keynesianism as a model after 1968, historians have reevaluated Snowden in a more favourable light. McKibbin argues that the Labour government had very limited room to manoeuvre in 1929-31 and it did as well as could be expected; indeed, it handled the British economy better than most foreign governments handled theirs, and the Great Depression was less severe in Britain than elsewhere.[15] 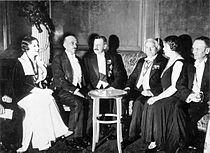 In the 1931 Dissolution Honours he was raised to the peerage as Viscount Snowden of Ickornshaw, in the West Riding of the County of York,[16] and served as Lord Privy Seal in the National government from 1931[17] to 1932 when he resigned in protest at the enactment of a full scheme of Imperial Preference and protectionist tariffs. In 1932 Snowden said there was never a greater mistake than to say that Cobdenism was dead: "Cobdenism was never more alive throughout the world than it was to-day...To-day the ideas of Cobden were in revolt against selfish nationalism. The need for the breaking down of trade restrictions, which took various forms, was universally recognized even by those who were unable to throw off those shackles".[18]

He subsequently wrote his Autobiography in which he strongly attacked MacDonald. In the 1935 general election, Snowden supported the Keynesian economic programme proposed by Lloyd George ("Lloyd George's New Deal"), despite it being a complete repudiation of Snowden's own classical liberal fiscal policies. Snowden claimed that he was returning to long-held economic views but that these had been "temporarily inadvisable" during the crisis of 1931 when "national necessity" demanded cutting public expenditure.[3]

Lord Snowden died of a heart attack at his home, Eden Lodge, Tilford, Surrey on 15 May 1937, aged 72. After cremation at Woking Crematorium his ashes were scattered on Cowling Moor near Ickornshaw. His library of books and pamphlets was presented to Keighley Public Library by his widow and in 1938 a cairn was erected to his memory on Ickornshaw Moor.[3]

His viscountcy died with him. Lady Snowden died in February 1951, aged 69.