Philip of Swabia (February/March 1177 – 21 June 1208) was a prince of the House of Hohenstaufen and King of Germany from 1198 to 1208. In the long-time struggle for the German throne upon the death of Emperor Henry VI between the Hohenstaufen and Welf dynasties, he was the first German king to be assassinated.

Philip was born in or near Pavia in the Imperial Kingdom of Italy, the fifth and youngest son of the Hohenstaufen emperor Frederick Barbarossa and his second wife Beatrice,[1] daughter of Count Renaud III of Burgundy, and thereby younger brother of Emperor Henry VI. Philip's great uncle Conrad III was the first scion of the Swabian Hohenstaufen dynasty to be elected King of the Romans in 1138, already against the fierce resistance by the rivalling House of Welf. During the time of Philip's birth, his father Emperor Frederick was able to settle the longstanding conflict with Pope Alexander III and the Italian cities of the Lombard League by concluding the Treaty of Venice. The newborn was probably named after Frederick's valued ally and confidant Archbishop Philip of Cologne. 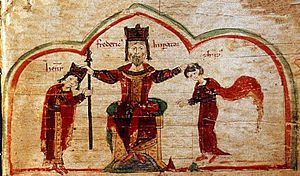 Young Philip initially prepared for an ecclesiastical career, he entered the clergy of Adelberg Abbey and in April 1189 was made provost at the collegiate church of Aachen Cathedral, while his father left Germany for the Third Crusade and drowned in the Göksu (Saleph) River in Anatolia the next year,[2] succeeded by Henry VI. In 1190 or 1191 Philip was elected Prince-bishop of Würzburg, though without being consecrated. His brother Henry had expanded the Hohenstaufen domains by marrying Queen Constance of Sicily in 1186, suspiciously eyed by the Roman Curia. Having accompanied his brother Henry to Italy in 1191, Philip forsook his ecclesiastical calling, and, travelling again to Italy, was appointed Margrave of Tuscany in 1195 and received an extensive grant of lands. In his retinue in Italy was the Minnesinger Bernger von Horheim.

On 26 December 1194, Queen Constance finally gave birth to a son, the later Emperor Frederick II. To secure his succession, his father Henry had the two-year-old elected King of the Romans before he prepared for the Crusade of 1197. To improve relationships with the Byzantine Empire, Henry betrothed Philip to Irene Angelina, a daughter of Emperor Isaac II and the widow of Roger III of Sicily, a lady who was described by Walther von der Vogelweide as "the rose without a thorn, the dove without guile". In early 1195, Philip was made Duke of Tuscany and received the disputed Matildine lands.[3] His rule there earned him the enmity of Pope Celestine III. In 1196 his brother Conrad died and he succeeded him as Duke of Swabia. His marriage to Irene took place in 1197 near Augsburg.

Struggle for the throne

Philip enjoyed his brother's confidence to a very great extent, and appears to have been designated as guardian of Henry's minor son Frederick II, in case of his father's early death. In September 1197 he had set out to fetch Frederick from Apulia for his coronation as German king. While staying in Montefiascone, he heard of the emperor's sudden death in Messina and returned at once to Germany. He appears to have desired to protect the interests of his nephew and to quell the disorder which arose on Henry's death, but was overtaken by events.

Meanwhile, a number of Princes of the Holy Roman Empire hostile to the ruling Hohentaufen dynasty under the leadership of Prince-Archbishop Adolph of Cologne took the occasion to elect a German anti-king in the person of the Welf Otto of Brunswick, the second surviving son of the former Saxon duke Henry the Lion and a nephew of King Richard I of England. The hostility to the kingship of a child was growing, and after Philip had been chosen as defender of the empire during Frederick's minority he finally consented to his own election. He was elected German king at Mühlhausen in Thuringia on 8 March 1198 (Laetare Sunday), backed by Duke Leopold VI of Austria, Duke Ottokar I of Bohemia, Duke Berthold V of Zähringen, and Landgrave Hermann I of Thuringia, however, in the absence of the Archbishops of Cologne, Mainz and Trier. His rival Otto was not elected king until June 9 by the Cologne archbishop, the Bishop of Paderborn, Bishop Thietmar of Minden, and three Prince-Provosts; he was crowned by Archbishop Adolph of Cologne on July 12 at the traditional place in Aachen, which had to be captured before against the resistance of loyal Hohenstaufen liensmen, though without receiving the Imperial Regalia, which were in the safe keeping of Philip.

Philip hesitated to assert himself, but at least he received the support of further German princes, forged an alliance with King Philip II of France and was crowned by Archbishop Aymon of Tarentaise at Mainz on 8 September of the same year. Nevertheless he knew that he had to settle the conflict with Otto and his supporters. A first attempt to mediate by the Mainz archbishop Conrad of Wittelsbach in 1199 was rejected by the Welf. Both sides strived for the coronation as Holy Roman Emperor by Pope Innocent III. The pope himself acted tactically, trying to wrest the affirmation of the sovereignty of his Papal States and the Kingdom of Sicily from the candidates. Several ecclesiastical and secular princes loyal to Philip reacted with a protestation in 1199, whereby they rejected any papal exertion of influence on the Imperial line of succession

In the war that followed, Philip, who drew his principal support from his Swabian home territories, met with considerable success. In 1199 he received further accessions to his party and carried the war into his opponent's Saxon territory, although unable to obtain the support of the papacy, and only feebly assisted by his ally King Philip II of France. The following year was less favourable to his arms; and in March 1201 Innocent took the decisive step of declaring the Hohenstaufen "persecutors of the church", placing Philip and his associates under the ban. The pope began to work energetically in favour of Otto, who beforehand had solemnly renounced any intentions to affiliate the Sicilian kingdom with the Holy Roman Empire. 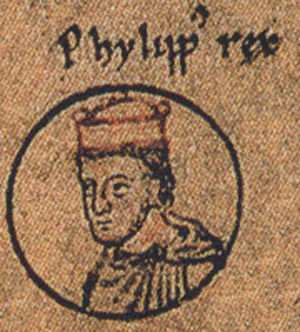 The papal support had little effect, however, and the Welfs as well as the Hohenstaufens had to assert their position by both threatening and bribing, by the display of splendour, and dynastic marriage politics. In 1199 Philip and Irene Angelina lavishly celebrated Christmas in Magdeburg–close to Otto's residence in Brunswick–in the presence of the Ascanian duke Bernard of Saxony and numerous Saxon and Thuringian nobles. The festival was rendered in an eloborated poem by Walther von der Vogelweide in order to spread the reputation of King Philip as a capable ruler. Again in Magdeburg Cathedral, Philip celebrated the elevation of Saint Cunigunde of Luxembourg on 9 September 1201.

Also in 1201, Philip was visited by his cousin Boniface of Montferrat, the leader of the Fourth Crusade. Although Boniface's exact reasons for meeting with Philip are unknown, while at Philip's court he also met Alexius Angelus, Philip's brother-in-law.Some historians have suggested that it was here that Alexius convinced Boniface, and later the Venetians, to divert the Crusade to Constantinople and restore Isaac II to the throne, as he had recently been deposed by Alexius III, Alexius and Irene's uncle.

The two succeeding years were still more unfavourable to Philip. The Přemyslid ruler Ottokar I, though he had received the hereditary Bohemian regality, divorced his wife Adelaide of Meissen and was declared deposed by Philip. Another former ally, Landgrave Hermann of Thuringia, drove him from northern Germany, thus compelling him to seek by abject concessions, but without success, reconciliation with Innocent. The reconciliation with Ottokar and the submission to Philip by Hermann of Thuringia after the 1204 siege of Weißensee, rendered by the chronicler Arnold of Lübeck, marks the turning-point of his fortunes. Philip was soon joined by Archbishop Adolph of Cologne, though against the will of the Cologne citizens, by Duke Henry of Brabant and even by Otto's brother Count Palatine Henry V. Archbishop Adolph, who received a sum of 5000 marks, and Duke Henry, who was vested with Maastricht and Duisburg, signed a written statement of support in November 1204.

To emphasize the new alliance with his long-time enemy Adolph of Cologne, Philip on 6 January 1205 was crowned again with great ceremony by the Archbishop at Aachen Cathedral. On 27 July 1206, he defeated a Cologne army loyal to Otto in Wassenberg, whereby both kings for the first time held secret talks, however without result. It was not until 1207 that Philip's entry into Cologne practically brought the war to a close. Pope Innocent noticed the worsening of Otto's prospects and a month or two later Philip was loosed from the papal ban. In March 1208 it seemed probable that a treaty was concluded by which a nephew of the pope was to marry one of Philip's daughters and to receive the disputed dukedom of Tuscany. 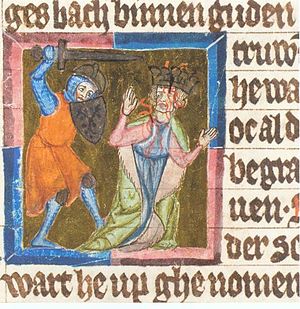 Philip was preparing to crush the last flicker of the Welf rebellion in Brunswick-Lüneburg, when he proceeded to Bamberg, in order to participate as a guest at the wedding of his niece Countess Beatrice II of Burgundy with Duke Otto of Merania on 21 June 1208. After the ceremony, Philip retired in his rooms, where he was assaulted and murdered by the Bavarian count palatine Otto VIII.[1] The pregnant queen Irene Angelina fled to Hohenstaufen Castle where she miscarried and died shortly afterwards. Otto of Wittelsbach escaped the Hohenstaufen henchmen.

The motives for the murder have not been conclusively established. Allegedly the Wittelsbach scion, already known for his unstable character, had fallen into a rage when he learned of the dissolution of his betrothal to Gertrude of Silesia by her father, the Piast duke Henry I the Bearded. Duke Henry was apparently informed of the Wittelsbach's cruel tendencies and in an act of concern for his young daughter decided to terminate the marriage agreement. Otto proceeded to blame Philip for another spurned marriage alliance (the first being to one of Philip's own daughter, Beatrice or Kunigunde, who was betrothed to Wenceslaus I of Bohemia in 1207) and swore revenge on the German King, culminating in the murder at Bamberg.[4] An alleged conspiracy by the Andechs dukes of Merania, King Philip II of France and Duke Henry of Brabant in favour of King Otto could never be proved.

Philip was first buried at Bamberg Cathedral; one of the attempts of an interpretation of the Bamberg Horseman, erected a few years after Philip's death, identifies the statue as an impersonation of the murdered king. He was the first ruling king to be assassinated since the era of the Merovingian dynasty, and the only German monarch ever to be killed beside the Habsburg king Albert I, who was slain by his nephew a hundred years later.

After Philip's death, Otto IV quickly prevailed against the remaining Hohenstaufen supporters, was acknowledged as German monarch at an Imperial Diet in Frankfurt in November 1208 and crowned Holy Roman Emperor by Pope Innocent III the next year. To make clear that he had not participated in Philip's assassination, he administered the Imperial ban to Otto of Wittelsbach and his alleged accomplices. Count Palatine Otto was killed as vogelfrei by the Imperial marshal Henry of Kalden in March 1209. However, Emperor Otto soon entered into conflict with Pope Innocent III, when he tried to conquer the Kingdom of Sicily in 1210. Upon his excommunication, the German princes turned to the Hohenstaufen heir Frederick II, who on Christmas 1213 had Philip's mortal remains re-interred in Speyer Cathedral.

Philip was described as a brave and handsome man, and contemporary writers, among whom was Arnold of Lübeck and Walther von der Vogelweide, praise his mildness and generosity.

Philip of Swabia married Princess Irene Angelina, daughter of Emperor Isaac II Angelos on 25 May 1197. Their four daughters were: