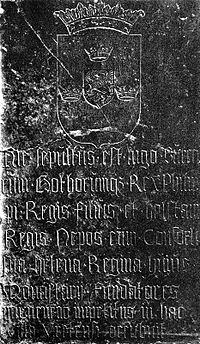 16th century copy of a gravestone to King Inge the Younger at Vreta Abbey, with some inaccurate information on it, though probably placed correctly over his and King Philip's bones near the church's altar.

Philip[1] or Filip (Swedish: Filip Halstensson) was King of Sweden 1105–1118, a son of King Halsten Stenkilsson.

Philip and his brother Inge the Younger ruled together from 1105 or 1110 and onwards as successors of their uncle Inge the Elder. According to the Westrogothic law he was a good king. Little else is known about him. Hardly any other Swedish king who was the undisputed ruler of the kingdom after the Christianization is less known than Philip.

According to the Hervarar saga, he ruled only for a short time, and was married to Ingigerd, the daughter of Harald Hardrada.