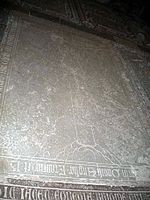 Philippa was born to Henry Bolingbroke (later King Henry IV of England) and his wife Mary de Bohun, at Peterborough Castle, Peterborough. In 1401, King Henry suggested to Queen Margaret I of Denmark that an alliance be formed between England and the Kalmar Union, with a marriage between the heir to the English throne and Catherine, sister to the heir of the Nordic thrones. Margaret could not agree to the English conditions for this marriage; instead, Philippa was engaged to Eric, and formally proclaimed queen in 1405.

She was married on 26 October 1406 to Eric of Pomerania in Lund Cathedral. Philippa was actually the first documented princess in history to wear a white wedding dress during a royal wedding ceremony: she wore a tunic with a cloak in white silk bordered with grey squirrel and ermine.[3] Philippa was given large parts of Sweden as her dower. During the first years of their marriage the couple lived in Kalmar in Sweden, and Philippa was to spend much of her queenhood living in Sweden. It had been decided that she would be granted personal fiefs in only one of the three kingdoms, and that was to be Sweden. Her head lady-in-waiting was the Swedish noblewoman Lady Katarina Knutsdotter, granddaughter of Saint Bridget through Märta Ulfsdotter, former lady-in-waiting of Queen Margaret I of Denmark herself. She was a benefactor of Vadstena Abbey, where she was a frequent guest.

During King Eric's periods of absence abroad, Philippa was effectively Regent. In Sweden, where she spent a lot of her time, she appears to have been de facto ruler even when the King was in residence. Eric evidently had great trust in Philippa. Both ancient and modern authors give a favourable account of her rule. It is even said that in certain matters she was more efficient than her husband. However, scholars have largely accepted this judgment of the Queen without going into detail.[4]

In 1422, Philippa presided over the Swedish council in order to solve a dispute between Swedish noble factions. During her husband's stay abroad from 1423 to 1425, she was Regent of the three Kalmar Union kingdoms. Among other acts, she made a treaty with some members of the Hansa states within the North-German Confederation concerning the validity of the coin-system. In 1426, she gathered support in Sweden for the war against Holstein; in the same year, she acquired Swedish support for the protection of Copenhagen against the Hanseatic League. In 1428, Philippa successfully organized the defence of Copenhagen against the Hanseatic League, a heroic feat later recounted by Hans Christian Andersen in Godfather's Picture Book (1868).[5] At the time of her death in 1430, she was in Sweden on a diplomatic mission. She is described as one of few royals of the Kalmar Union who was actually popular outside Denmark. She was loved by the people of Copenhagen for rallying the citizens to fight the Hanseatic fleet in Copenhagen Harbor. She also did many other deeds for the citizens of Copenhagen by helping the poor and providing for widows and orphans.[citation needed]

The queen bore a stillborn boy in 1429. She died on 5 January 1430 and was buried in the Cloister Church at Vadstena, close to Linköping in Östergötland, Sweden. After her death Eric replaced her with Cecilia.

Media related to Philippa of England at Wikimedia Commons