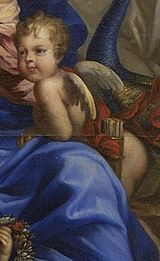 Philippe was one of the three children of Louis XIV alive at the time the portrait of his family was painted, in 1670.

Philippe-Charles de France, born at the Château de Saint-Germain-en-Laye, was the second son of the Louis XIV, and titled duc d'Anjou at birth, title previously held by his uncle, Philippe de France, duc d'Orléans, younger brother of Louis XIV. He was baptised at the Chapelle des Tuileries à Paris on 24 March 1669.[1]

As the younger son of the king, Philippe-Charles was not expected to become the Dauphin; however, it was hoped he would inherit the vast fortune of his second cousin, Anne Marie Louise d'Orléans, Duchess of Montpensier, who had no children. According to Nancy Mitford, the Queen, his mother, suggested it many times. While at Saint-Germain-en-Laye, Anjou died of a chest infection, like his elder sister, Anne-Élisabeth de France had died six years before his birth. Upon his death, the appanage of the Duchy of Anjou reverted to the Crown, and was given to his younger brother, Louis François. Philippe Charles was buried on 12 July 1671, at the Basilica of Saint-Denis.[1]

At the death of the Duchess of Montpensier in 1693, her fortune went to her direct and legal heir, the House of Orléans (Philippe's uncle Philippe I, Duke of Orléans).