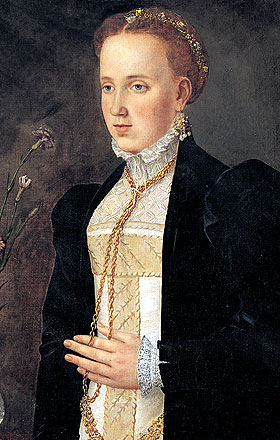 Philippine Welser (1527 – 24 April 1580) was the morganatic wife of Ferdinand II, Archduke of Austria. She was granted the titles Baroness of Zinnenburg, Margravine of Burgau, Landgravine of Mellenburg and Countess of Oberhohenberg and Niederhohenberg.

She was born in Augsburg. Her family, the Welsers of Augsburg, were merchants and financiers of European significance and great wealth. Her uncle Bartholomeus V. Welser received Venezuela as security for a loan from the King of Spain in 1528, and the family thus became rulers of the colony. Already at a young age, she was renowned for both her beauty and her learning. She died at Schloss Ambras, Innsbruck in Tyrol.