Such a booth usually has lighting, a door to provide privacy, and windows to let others know if the booth is in use. The booth may be furnished with a printed directory of local telephone numbers, and a booth in a formal setting, such as a hotel, may be furnished with paper and pen and even a seat. An outdoor booth may be made of metal and plastic to withstand the elements and heavy use, while an indoor booth (once known as a silence cabinet) may have more elaborate architecture and furnishings.[4] Most outdoor booths feature the name and logo of the telephone service provider. 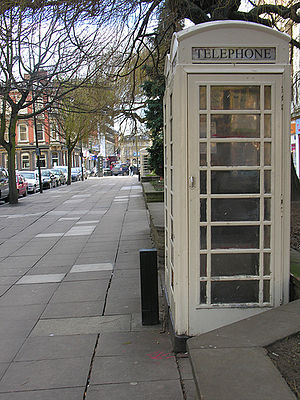 In 1889, William Gray is credited with inventing the payphone in the United States, and George A, Long was its developer.[5] The first telephone booth in London, England was probably installed near the Staple Inn in High Holborn in May 1903. It was operated and located by the Grand Central Railway. However, some sources[6] claim that there was a telephone box called "Fernsprechkiosk" in Berlin in 1881.

In the UK, the creation of a national network of telephone boxes commenced in 1920 starting with the K1 which was made of concrete, however the city of Kingston Upon Hull is noted for having its individual payphone service, with cream coloured phone boxes, as opposed to classic royal red in the rest of Britain.

File:ManUsingPhoneBox Footscray.JPG
An example of a person using a Telstra phone box in Victoria, Australia

Starting in the 1970s pay telephones were less and less commonly placed in booths in the United States. In many cities where they were once common, telephone booths have now been almost completely replaced by non-enclosed pay phones. In the United States, this replacement was caused, at least in part, by an attempt to make the pay telephones more accessible to disabled people. However, in the United Kingdom, telephones remained in booths more often than the non-enclosed set up. Although still fairly common, the number of phone boxes has declined sharply in Britain since the late 1990s due to the boom of mobile phones.

Many locations that provide pay-phones mount the phones on kiosks rather than in booths—this relative lack of privacy and comfort discourages lengthy calls in high-demand areas such as airports.

Special equipment installed in some telephone booths allows a caller to use a computer, a portable fax machine, or a telecommunications device for the deaf.

Paying for the call

The user of the booth pays for the call by depositing coins into a slot on the telephone. With some telephones the deposit is made before making the call, and the coins are returned if the call attempt is unsuccessful (busy, no answer, etc.). With other types of telephone coins are not deposited until the call has been made and the caller hears their party answer. The deposit of coins then permits two-way conversation to proceed.

Calls may be paid for by entering a payment code on the telephone's keypad, by swipe-card ("Swipe & Call") or by using a telephone card. Some pay phones are equipped with a card reader that allows a caller to make payment with a credit card.

A caller who possesses no means of payment may have the phone company's operator ask the call recipient if the recipient is willing to make payment for the call; this is known as "reversing the charges", "reverse charged call" or a "collect call". It is also sometimes possible to place a call to a phone booth if the intended recipient is known to be waiting at the booth, but not all phone booths allow such incoming calls. Long before "computer hacking" was a common phenomenon, creative mischief-makers devised tactics for obtaining free phone usage through a variety of techniques, including several for defeating the electro-mechanical payment mechanisms of telephone booths—early methods of phone phreaking. 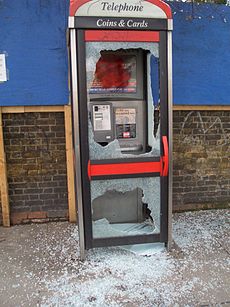 The increasing use of mobile phones has led to a decreased demand for pay telephones, but the increasing use of laptops is leading to a new kind of service. In 2003, service provider Verizon announced that they would begin offering wireless computer connectivity in the vicinity of their phone booths in Manhattan. As of 2006 the Verizon wifi telephone booth service was discontinued in favor of the more expensive Verizon Wireless's EVDO system.[7] This allows a computer user to connect with remote computer services by means of a short range device stationed within the booth. The caller pays for usage by means of a pre-arranged account code stored inside the caller's computer. Wireless access is motivating telephone companies to place wireless stations at locations that have traditionally hosted telephone booths, but stations are also appearing in new kinds of locations such as libraries, cafés, and trains. Phone booths have been slowly disappearing since the advent of the mobile phone in 1973.

A rise in vandalism in certain[which?] regions has prompted several companies to manufacture simpler booths with extremely strong pay-phones.

Most telephone booths in Northern Ireland are able to accept two currencies. They are able to accept both pound sterling and euro, due to the proximity to the Republic of Ireland. Similarly, mainly in large cities in Great Britain, certain telephone booths accept both sterling and euro. Other services provided by these booths are internet access, SMS text messaging and ordinary phone services.

Pay phones may still be used by mobile/cellular phone users if their phones become unusable, get stolen, or for other emergency uses. These uses may make the complete disappearance of pay phones in the near future less likely. Often, at least in emergency, a phone call can be made from a hotel or a shop, making public pay phones less needed.

By 2007, Finnet companies and TeliaSonera Finland had discontinued their public telephones, and the last remaining operator Elisa Oyj did that during the beginning of that year.[9]

The telephone company BT is steadily removing public telephone kiosks from the streets of Great Britain. It is permitted to remove a kiosk without consultation provided that there is another kiosk within 400 metres walking distance. In other cases, it is supposed to comply with Ofcom rules on consultation with the local authority.[10]

Since many telephone boxes tend to be at the roadside and already have electricity supplies, a trial is to take place in the Spanish capital, Madrid, to convert 30 former telephone boxes into charging points for electric cars.[14]

Many telephone boxes in the United Kingdom have become locations for advertisements, bearing posters, with the development of "StreetTalk" by JCDecaux.[15] This is in addition to the ST6 series of telephone boxes introduced in 2007 which are designed to feature a phone on one side and a JCDecaux-owned advertising space on the otherside. The advertising pays for the running of the phone.