From Infogalactic: the planetary knowledge core
Jump to: navigation, search
Not to be confused with Phong shading.

The Phong reflection model (also called Phong illumination or Phong lighting) is an empirical model of the local illumination of points on a surface. In 3D computer graphics, it is sometimes ambiguously referred to as "Phong shading", in particular if the model is used in combination with the interpolation method of the same name and in the context of pixel shaders or other places where a lighting calculation can be referred to as “shading”.

The Phong reflection model was developed by Bui Tuong Phong at the University of Utah, who published it in his 1973 Ph.D. dissertation.[1][2] It was published in conjunction with a method for interpolating the calculation for each individual pixel that is rasterized from a polygonal surface model; the interpolation technique is known as Phong shading, even when it is used with a reflection model other than Phong's. Phong's methods were considered radical at the time of their introduction, but have since become the de facto baseline shading method for many rendering applications. Phong's methods have proven popular due to their generally efficient use of computation time per rendered pixel.

Phong reflection is an empirical model of local illumination. It describes the way a surface reflects light as a combination of the diffuse reflection of rough surfaces with the specular reflection of shiny surfaces. It is based on Bui Tuong Phong's informal observation that shiny surfaces have small intense specular highlights, while dull surfaces have large highlights that fall off more gradually. The model also includes an ambient term to account for the small amount of light that is scattered about the entire scene.

Visual illustration of the Phong equation: here the light is white, the ambient and diffuse colors are both blue, and the specular color is white, reflecting a small part of the light hitting the surface, but only in very narrow highlights. The intensity of the diffuse component varies with the direction of the surface, and the ambient component is uniform (independent of direction).

For each light source in the scene, components

are defined as the intensities (often as RGB values) of the specular and diffuse components of the light sources, respectively. A single term

controls the ambient lighting; it is sometimes computed as a sum of contributions from all light sources.

For each material in the scene, the following parameters are defined:

, which is a specular reflection constant, the ratio of reflection of the specular term of incoming light,

, which is a diffuse reflection constant, the ratio of reflection of the diffuse term of incoming light (Lambertian reflectance),

, which is an ambient reflection constant, the ratio of reflection of the ambient term present in all points in the scene rendered, and

, which is a shininess constant for this material, which is larger for surfaces that are smoother and more mirror-like. When this constant is large the specular highlight is small. 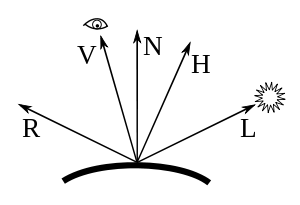 , which is the set of all light sources,

, which is the direction vector from the point on the surface toward each light source (

, which is the normal at this point on the surface,

, which is the direction that a perfectly reflected ray of light would take from this point on the surface, and

, which is the direction pointing towards the viewer (such as a virtual camera).

where the direction vector

is calculated as the reflection of

and the hats indicate that the vectors are normalized. The diffuse term is not affected by the viewer direction (

). The specular term is large only when the viewer direction (

) is aligned with the reflection direction

. Their alignment is measured by the

is equal to their dot product. When

is large, in the case of a nearly mirror-like reflection, the specular highlight will be small, because any viewpoint not aligned with the reflection will have a cosine less than one which rapidly approaches zero when raised to a high power.

When the color is represented as RGB values, as often is the case in computer graphics, this equation is typically modeled separately for R, G and B intensities, allowing different reflections constants

for the different color channels.

is a real number which doesn't have to be an integer. If

is an integer, then the expression

can be more efficiently calculated by squaring

This approximation of the specular term holds for a sufficiently large, integer

can be approximated as

The latter is much less sensitive to normalization errors in

is, and practically doesn't require

to be normalized unless for very low-resolved triangle meshes.

This method substitutes a few multiplications for a variable exponentiation, and removes the need for an accurate reciprocal-square-root-based vector normalization.

The Phong reflection model in combination with Phong shading is an approximation of shading of objects in real life. This means that the Phong equation can relate the shading seen in a photograph with the surface normals of the visible object. Inverse refers to the wish to estimate the surface normals given a rendered image, natural or computer-made.

For example, we have a cylindrical object, for instance a finger, and wish to compute the normal

on a line on the object. We assume only one light, no specular reflection, and uniform known (approximated) reflection parameters. We can then simplify the Phong equation to:

a constant equal to the ambient light and

a constant equal to the diffusion reflection. We can re-write the equation to:

Which can be rewritten for a line through the cylindrical object as:

we get two equations with two unknowns.

Because of the powers of two in the equation there are two possible solutions for the normal direction. Thus some prior information of the geometry is needed to define the correct normal direction. The normals are directly related to angles of inclination of the line on the object surface. Thus the normals allow the calculation of the relative surface heights of the line on the object using a line integral, if we assume a continuous surface.

If the object is not cylindrical, we have three unknown normal values

. Then the two equations still allow the normal to rotate around the view vector, thus additional constraints are needed from prior geometric information. For instance in face recognition those geometric constraints can be obtained using principal component analysis (PCA) on a database of depth-maps of faces, allowing only surface normals solutions which are found in a normal population.[4]

As already implied, the Phong reflection model is often used together with Phong shading to shade surfaces in 3D computer graphics software. Apart from this, it may also be used for other purposes. For example, it has been used to model the reflection of thermal radiation from the Pioneer probes in an attempt to explain the Pioneer anomaly.[5]