Most dialects of modern English have two high back vowels: the close back rounded vowel /u/ found in words like goose, and the near-close near-back rounded vowel /ʊ/ found in words like foot. This article discusses the history of these vowels in various dialects of English, focusing in particular on phonemic splits and mergers involving these sounds.

The same four vowels existed in the Middle English system. The short vowels were still spelt ⟨u⟩ and ⟨o⟩, but long /uː/ came to be spelt as ⟨ou⟩, and /oː/ as ⟨oo⟩. Generally the Middle English vowels descended from the corresponding Old English ones, although there were certain alternative developments – see English historical vowel correspondences.

Due to Middle English open syllable lengthening, short /o/ was mostly lengthened to /ɔː/ (an opener back vowel) in open syllables; this development can be seen in words like nose. In the Great Vowel Shift, ME long /oː/ ended up being raised to /uː/, in words like moon; ME long /uː/ was diphthongized, becoming the present-day /aʊ/, as in mouse; and the /ɔː/ of nose was raised and later diphthongized, leading to present-day /oʊ ~ əʊ/.

At some point, short /u/ developed into a lax, near-close near-back rounded vowel, /ʊ/, as found in words like put. (Similarly, short /i/ has become /ɪ/.) According to Roger Lass, this laxing occurred in the 17th century, but other linguists have suggested that it took place potentially much earlier.[1] The short /o/ remaining in words like lot has also been lowered, and unrounded in some accents (see low back vowels).

In a handful of words, including some very common ones, the vowel /uː/ was shortened to /ʊ/. In a few of these words, notably blood and flood, this shortening happened early enough that the resulting /ʊ/ underwent the "foot–strut split" (see next section) and are now pronounced with /ʌ/. Other words that underwent shortening later consistently have /ʊ/, such as good, book, and wool. Still other words, such as roof, hoof, and root are in the process of the shift today, with some speakers preferring /uː/ and others preferring /ʊ/ in such words. For some speakers in Northern England, words ending in -ook such as book, cook still have the long /uː/ vowel. 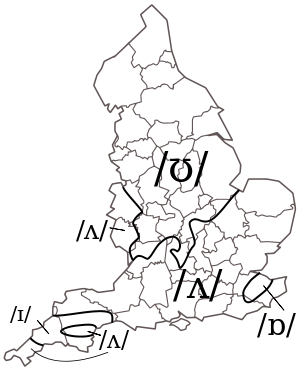 The vowel in the word sun

The foot–strut split is the split of Middle English short /u/ into two distinct phonemes /ʊ/ (as in foot) and /ʌ/ (as in strut). The split occurs in most varieties of English; the most notable exceptions being those of Northern England and the English Midlands.[2]

The origin of the split is the unrounding of /ʊ/ in Early Modern English, resulting in the phoneme /ʌ/. In general (though with some exceptions), unrounding to /ʌ/ did not occur if /ʊ/ was preceded by a labial consonant (e.g., /p/, /f/, /b/) and followed by /l/, /ʃ/, or /tʃ/, leaving the modern /ʊ/. Because of the inconsistency of the split, the words put and putt became a minimal pair, distinguished as /pʊt/ and /pʌt/. The first clear description of the split dates from 1644.[3]

In non-splitting accents, cut and put rhyme, putt and put are homophonous as /pʊt/, and pudding and budding rhyme. However luck and look are not necessarily homophones; many accents in the area concerned have look as /luːk/, with the vowel of goose.

The absence of this split is a less common feature of educated Northern English speech than the absence of the trap–bath split. The absence of the foot–strut split is sometimes stigmatized,[4] and speakers of non-splitting accents may try to introduce it into their speech, sometimes resulting in hypercorrections such as pronouncing butcher /'bʌtʃə/.[5]

The name "foot–strut split" refers to the lexical sets introduced by Wells (1982), and identifies the vowel phonemes in the words. From a historical point of view, this name is inappropriate because the word foot did not have short /ʊ/ at the time the split happened, but underwent shortening at a later time.

In modern standard varieties of English, e.g. Received Pronunciation (RP) and General American (GA), the spelling is a reasonably good guide to whether a word is in the FOOT or STRUT lexical sets. The spellings o and u nearly always indicate the STRUT set (common exceptions are wolf, woman, pull, bull, full, push, bush, cushion, puss, put, pudding and butcher), while the spellings oo and ould usually indicate the FOOT set (common exceptions are blood and flood). The spellings of some words changed in accordance with this pattern: e.g. wull became wool and wud became wood. In some recent loan words such as Muslim both pronunciations are found.

Development of the sequence /juː/

This /ɪu/ has remained as such in some Welsh, northern English, and American accents, in which threw /θrɪu/ is distinct from through /θruː/. In the majority of accents, however, the falling diphthong /ɪu/ turned into a rising diphthong, which became the sequence /juː/. This change had taken place in London by the end of the 17th century. Depending on the preceding consonant and on the dialect, this either remained as /juː/ or developed into /uː/ by the process of yod-dropping.[7] Hence the present-day standard English pronunciations of duke /d(j)uːk/, new /n(j)uː/, few /fjuː/ and rude /ruːd/.

The foot–goose merger is a phenomenon that occurs in Scottish English, Ulster varieties of Hiberno-English, Malaysian English and Singaporean English,[8] where the vowels /ʊ/ and /uː/ are merged. As a result, pairs like look/Luke are homophones and good/food and foot/boot rhyme. The quality of the merged vowel is usually [ʉ] or [y] in Scottish English and [u] in Singaporean English.[9] The use of the same vowel in "foot" and "goose" in these dialects is not due to phonemic merger, but the appliance of different languages' vowel system to the English lexical incidence.[10] The full–fool merger is a conditioned merger of the same two vowels before /l/, making pairs like pull/pool and full/fool homophones.

In Geordie, the goose vowel splits into what may be considered two distinct phonemes:

Compare the similar development of the high front fleece vowel.

The change of /uː.ɪ/ to [ʊɪ] is a process that occurs in many varieties of British English where bisyllabic /uː.ɪ/ becomes the diphthong [ʊɪ] in certain words. As a result, "ruin" is pronounced as monosyllabic [ˈɹʊɪn] and "fluid" is pronounced [ˈflʊɪd].[12]