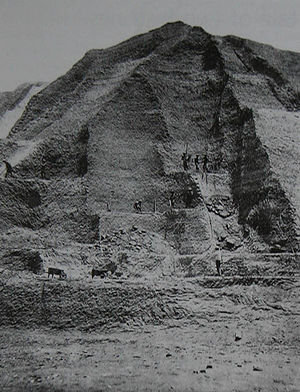 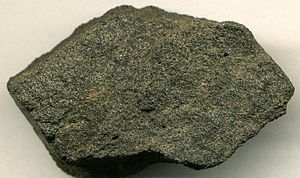 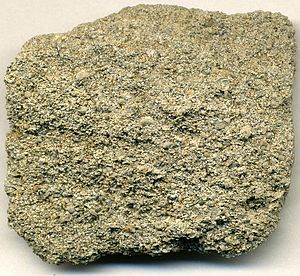 Phosphorite, phosphate rock or rock phosphate is a non-detrital sedimentary rock which contains high amounts of phosphate bearing minerals. The phosphate content of phosphorite is at least 15 to 20%; if it is assumed that the phosphate minerals in phosphorite are hydroxyapatite and fluoroapatite, phosphate minerals contain roughly 18,5 % phosphorus by weight and if phosphorite contains around 20% of these minerals, phosphorite is roughly 3,7 % phosphorus by weight, which is a considerable enrichment over the typical sedimentary rock content of less than 0.2%.[1] The phosphate is present as fluorapatite Ca5(PO4)3F (CFA) typically in cryptocrystalline masses (grain sizes < 1 μm) referred to as collophane.[1] It is also present as hydroxyapatite Ca5(PO4)3OH or Ca10(PO4)6(OH)2, which is often dissolved from vertebrate bones and teeth, whereas fluorapatite can originate from hydrothermal veins. Other sources also include chemically dissolved phosphate minerals from igneous and metamorphic rocks. Phosphorite deposits often occur in extensive layers, which cumulatively cover tens of thousands of square kilometres of the Earth's crust.[2]

Limestones and mudstones are common phosphate bearing rocks.[3] Phosphate rich sedimentary rocks can occur in dark brown to black beds, ranging from centimeter sized laminae to beds that are several meters in thickness. Although these thick beds can exist they are rarely only composed of phosphatic sedimentary rocks. Phosphatic sedimentary rocks are commonly accompanied by or interbedded with shales, cherts, limestone, dolomites and sometimes sandstone.[3] These layers contain the same textures and structures as fine grained limestones and may represent diagenetic replacements of carbonate minerals by phosphates.[1] They also can be composed of peloids, ooids, fossils, and clasts that are made up of apatite. There are some phosphorites that are very small and have no distinctive granular textures. This means that their textures are similar to that of collophane, or fine micrite-like texture. Phosphatic grains may be accompanied by organic matter, clay minerals, silt sized detrital grains, and pyrite. Peloidal or pelletal phosphorites occur normally; whereas oolitic phosphorites are not common.[3]

Phosphorites are known from Proterozoic banded iron formations in Australia, but are more common from Paleozoic and Cenozoic sediments. The Permian Phosphoria Formation of the western United States represents some 15 million years of sedimentation. It reaches a thickness of 420 metres and covers an area of 350,000 km2.[1] Commercially mined phosphorites occur in France, Belgium, Spain, Morocco, Tunisia and Algeria. In the United States phosphorites have been mined in Florida, Tennessee, Wyoming, Utah, Idaho and Kansas.[4]

(1) Pristine: Phosphates that are in pristine conditions have not undergone bioturbation. In other words, the word pristine is used when phosphatic sediment, phosphatized stromatolites and phosphate hardgrounds have not been disturbed.[5]

(2) Condensed: Phosphatic particles, laminae and beds are considered condensed when they have been concentrated. This is helped by the extracting and reworking processes of phosphatic particles or bioturbation.[5]

(3) Allochthonous: Phosphatic particles that were moved by turbulent or gravity-driven flows and deposited by these flows.[5]

The heaviest accumulation of phosphorus is mainly on the ocean floor. Phosphorus accumulation occurs from atmospheric precipitation, dust, glacial runoff, cosmic activity, underground hydrothermal volcanic activity, and deposition of organic material. However, the primary inflow of dissolved phosphorus is from continental weathering, brought out by rivers to the ocean.[6] It is then processed by both micro- and macro-organisms. Diatomaceous plankton, phytoplankton, and zooplankton process and dissolve phosphorus in the water. The bones and teeth of certain fish (e.g. anchovies) absorb phosphorus and are later deposited and buried in the ocean sediment.[7]

Phosphates are known to be deposited in a wide range of depositional environments. Normally phosphates are deposited in very shallow, near shore marine or low energy environments. This includes environments such as supratidal zones, littoral or intertidal zones, and most importantly estuarine.[7] Currently, areas of oceanic upwelling cause the formation of phosphates. This is because of the constant stream of phosphate brought from the large, deep ocean reservoir (see below). This cycle allows continuous growth of organisms.[5]

Supratidal zones: Supratidal environments are part of the tidal flat system where the presence of strong wave activity is non-existent. Tidal flat systems are created along open coasts and relatively low wave energy environments. They can also develop on high energy coasts behind barrier islands where they are sheltered from the high energy wave action. Within the tidal flat system, the supratidal zone lies in a very high tide level. However, it can be flooded by extreme tides and cut across by tidal channels. This is also subaerially exposed, but is flooded twice a month by spring tides.[8]

Littoral environments/ intertidal zones: Intertidal zones are also part of the tidal flat system. The intertidal zone is located within the mean high and low tide levels. It is subject to tidal shifts, which means that it is subaerially exposed once or twice a day. However, it is not exposed long enough to withhold vegetation. The zone contains both suspension sedimentation and bed load.[8]

Estuarine environments: Estuarine environments, or estuaries, are located at the lower parts of rivers that stream into the open sea. Since they are in the seaward section of the downed valley system they receive sediment from both marine and fluvial sources. These contain facies that are affected by tide and wave fluvial processes. From the top, the estuary is considered to stretch from in the landward limit of tidal facies to the seaward limit of costal facies. Phosphorites are often deposited in fjords within estuarine environments. These are estuaries with shallow sill constrictions. During Holocene sea-level rise, these estuaries built a U-shaped valley profile formed by drowning the glacially eroded valleys.[8]

The most common occurrence of phosphorites are related to strong marine upwelling of sediments. Upwelling is caused by deep water currents that are brought up to coastal surfaces where a large deposition of phosphorites may occur. This type of environment is the main reason why phosphorites are commonly associated with silica and chert. Estuaries are also known as a phosphorus “trap”. This is because coastal estuaries contain a high productivity of phosphorus from marsh grass and benthic alge which allow an equilibrium exchange between living and dead organisms.[9] 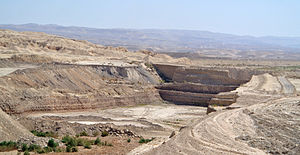 Phosphorite mine near Oron, Negev, Israel.

Deposits which contain phosphate in quantity and concentration which are economic to mine as ore for their phosphate content are not particularly common. The two main sources for phosphate are guano, formed from bird droppings, and rocks containing concentrations of the calcium phosphate mineral, apatite.

Froth flotation is used to concentrate the mined phosphorus to rock phosphate. The mined ore slurry is treated with fatty acids to cause calcium phosphate to become hydrophobic.

For general use in the fertilizer industry, phosphate rock or its concentrates preferably have levels of 30% phosphorus pentoxide (P2O5), reasonable amounts of calcium carbonate (5%), and <4% combined iron and aluminium oxides. Worldwide, the resources of high-grade ore are declining, and the beneficiation of lower grade ores by washing, flotation and calcining is becoming more widespread.

The US is the world's leading producer and exporter of phosphate fertilizers, accounting for about 37% of world P2O5 exports.[11] The world’s total economic demonstrated resource of rock phosphate is 18 Gt, which occurs principally as sedimentary marine phosphorites.[10]

China, the United States and Morocco are the world's largest miners of phosphate rock, with a production of 77MT, 29.4MT and 26.8MT (including 2.5MT in Western Sahara) respectively in 2012 while Global production reached 195MT.[12] Other countries with significant production include Brazil, Russia, Jordan and Tunisia. Historically, large amounts of phosphates were obtained from deposits on small islands such as Christmas Island and Nauru, but these sources are now largely depleted.