The Photian Schism was a four-year (863–867) schism between the episcopal sees of Rome and Constantinople.

At issue was the papal claim to jurisdiction in the East, not accusations of heresy.[1] The schism arose largely as a struggle for ecclesiastical control of the southern Balkans and because of a personality clash between the heads of the two sees,[2] both of whom were elected in the year 858 and both of whose reigns ended in 867, by death in the case of the Pope, by the first of two depositions for the Patriarch. The Photian Schism thus differed from what occurred in the 11th century, when the pope's authority as a first among equals was challenged on the grounds of having lost that authority through heresy.[1] 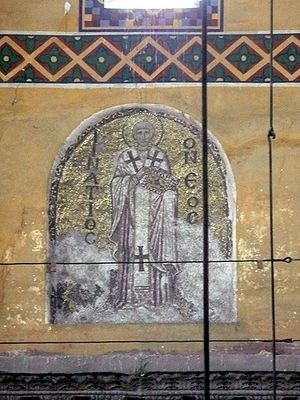 In 858 Patriarch Ignatius of Constantinople, who had been patriarch since 847, was deported by Byzantine Emperor Michael III and his uncle the effective ruler Bardas on suspicion of being in league with their opponents, and may have formally resigned,[3] although some historians conclude that he refused.[4] The layman Photius was elected in his place and was hurriedly consecrated bishop within one week contrary to the canonical rules but not without precedent in Constantinople.[5] One of the consecrating bishops was Gregory Asbestos of Syracuse, whom Ignatius had condemned and deposed.[6] When some bishops and most of the monasteries (most notably that of Studion) refused to recognize him, Photius held a synod in 859 that declared Ignatius no longer patriarch.[7]

In 860, Emperor Michael III invited Pope Nicholas I to send legates to a council at Constantinople which would further elucidate Catholic doctrine on icons.[8] The Pope decided to send legates and wrote to Photius, expressing satisfaction at his orthodox profession of faith, reproving his hurried uncanonical consecration, but saying that, if the legates' examination into the conduct of Ignatius supported the accusations made, he would accept Photius as patriarch, reserving judgement to himself.[9] Exceeding their powers and perhaps under pressure from the imperial court,[4] the legates took part in 861 in a synod at Constantinople that ruled in favour of Photius, but Nicholas I eventually disowned their choice,[2] and in 863 held a synod of his own in Rome, which annulled the proceedings of the 861 synod in Constantinople, condemned Photius and reinstated Ignatius.[10] 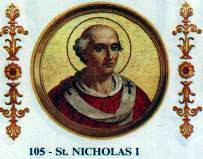 In response to a strongly worded letter from the Emperor, Nicholas declared in 865 that he was ready to reopen the case.[4] But rivalry erupted at this stage also in relation to the Bulgars, whose Khan had accepted Christianity from the Byzantines after a short war that resulted in his conversion and promise to convert his people. On meeting refusal from Photius for a separate patriarch for these new Christians, Khan Boris I had invited Latin missionaries.[11] In 867, Photius attacked these Latins for adding the Filioque to the Nicene Creed. He did not make this accusation against the Western Church as whole, still less against Rome, which at that time had not accepted this addition to the Creed. Only in the late 13th century, when the Filioque was central to Byzantine polemics, were his arguments adopted, and few had even referred to them until then.[1][12]

With the approval of the Emperor, who feared what was seen as an advance of the Franks close to his capital, Photius invited the patriarchs of Alexandria, Antioch and Jerusalem to meet in Constantinople and pronounce on this "encroachment".[13] This 867 synod took the grave step of condemning Pope Nicholas as a heretic and declaring him deposed.[14]

Khan Boris I of Bulgaria would further complicate relations between Rome and Constantinople by approaching Pope Nicholas. Photius was aware of Boris's approaches and sought to ease his mind on how to be a Christian Leader by writing, 'On the Duties of a prince'. Boris had also asked the Pope 115 questions, which Pope Nicholas answered in Responsa Nicolai papae I. ad consulta Bulgarorum (The Responses of Pope Nicholas I to the Questions of the Bulgars). However, due to the popes refusal to appoint Formosus as archbishop of Bulgaria, the khan once again turned to Byzantium, who granted Bulgaria autocephalous status during the 4th council of Constantinople.[15]

Nicholas died before news of this action reached Rome. In the same year, Emperor Michael III was killed, and his murderer and successor Basil I deposed Photius, replacing him by Ignatius. After the death or deposition of the two protagonists, their successors reestablished communion, thus ending the schism, though not the disputes between the two sees.

Ignatius upheld Byzantine claims to Bulgaria no less strongly than Photius. And when he died in 877, Photius was made patriarch again. Pope John VIII was more flexible than Nicholas I and at a council in Constantinople in 879–880 his legates confirmed acceptance of Photius as patriarch and agreed to an arrangement whereby Rome was given nominal authority over Bulgaria but actual jurisdiction was in the hands of Constantinople.[2] Bulgaria would remain autocephalous until 927, when it would be elevated to a Patriarchate during Peace accords with the Byzantine Empire.

Further north than Bulgaria, in Greater Moravia, Saints Cyril and Methodius, who had been sent by Emperor Michael and Photius, sided with the Pope against Photius.[16]