From Infogalactic: the planetary knowledge core
Jump to: navigation, search
For the pseudo-Aristotelian treatise, see Physiognomonics. For the 2013 Korean film, see Physiognomy (film). 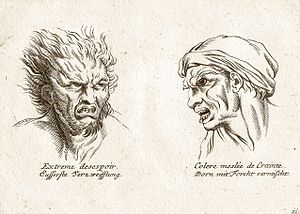 Illustration in a 19th-century book about physiognomy

Physiognomy (from the Gk. physis meaning "nature" and gnomon meaning "judge" or "interpreter") is the assessment of a person's character or personality from his or her outer appearance, especially the face. The term can also refer to the general appearance of a person, object, or terrain, without reference to its implied characteristics, as in the physiognomy of a plant community.

Credence of such study has varied from time to time. The practice was well accepted by the ancient Greek philosophers, but fell into disrepute in the Middle Ages when practised by vagabonds and mountebanks. It was then revived and popularised by Johann Kaspar Lavater before falling from favour again in the late 19th century.[1] Physiognomy as understood in the past meets the contemporary definition of a pseudoscience.[2]

No clear evidence indicates physiognomy works, though recent studies have suggested that facial appearances do "contain a kernel of truth" about a person's personality.[1]

Physiognomy is also sometimes referred to as anthroposcopy, though the expression was more common in the 19th century when the word originated.[3]

Notions of the relationship between an individual's outward appearance and inner character are historically ancient, and occasionally appear in early Greek poetry. Siddhars from ancient India are also known to have defined samudrika lakshanam that identifies personal characteristics with body features. The first indications of a developed physiognomic theory appear in fifth century BC Athens, with the works of Zopyrus (who was featured in a dialogue by Phaedo of Elis), who was said to be an expert in the art. By the fourth century BC, the philosopher Aristotle made frequent reference to theory and literature concerning the relationship of appearance to character. Aristotle was apparently receptive to such an idea, as evidenced by a passage in his Prior Analytics:

It is possible to infer character from features, if it is granted that the body and the soul are changed together by the natural affections: I say "natural", for though perhaps by learning music a man has made some change in his soul, this is not one of those affections natural to us; rather I refer to passions and desires when I speak of natural emotions. If then this were granted and also that for each change there is a corresponding sign, and we could state the affection and sign proper to each kind of animal, we shall be able to infer character from features.

The first systematic physiognomic treatise to survive to the present day is a slim volume, Physiognomonica (English: Physiognomonics), ascribed to Aristotle (but probably of his "school" rather than created by the philosopher himself). The volume is divided into two parts, conjectured to have been originally two separate works. The first section discusses arguments drawn from nature or other races, and concentrates on the concept of human behavior. The second section focuses on animal behavior, dividing the animal kingdom into male and female types. From these are deduced correspondences between human form and character.

After Aristotle, the major extant works in physiognomy are:

After inspecting Socrates, a physiognomist announced that he was given to intemperance, sensuality, and violent bursts of passion—which was so contrary to Socrates's image that his students accused the physiognomist of lying. Socrates put the issue to rest by saying that originally he was given to all these vices, but had particularly strong self-discipline.[5]

The term was common in Middle English, often written as 'fisnamy' or 'visnomy', as in the The Tale of Beryn, a spurious addition to The Canterbury Tales: "I knowe wele by thy fisnamy, thy kynd it were to stele".

Physiognomy's validity was once widely accepted. English universities taught it until Henry VIII of England outlawed "beggars and vagabonds playing 'subtile, crafty and unlawful games such as physnomye or 'palmestrye'" in 1530 or 1531.[6][7] Around this time, scholastic leaders settled on the more erudite Greek form 'physiognomy' and began to discourage the whole concept of 'fisnamy'.

Leonardo da Vinci dismissed physiognomy in the early 16th century as "false", a chimera with "no scientific foundation".[8] Nevertheless, Leonardo believed that lines caused by facial expressions could indicate personality traits. For example, he wrote that "those who have deep and noticeable lines between the eyebrows are irascible".[8]

The principal promoter of physiognomy in modern times was the Swiss pastor Johann Kaspar Lavater (1741–1801) who was briefly a friend of Goethe. Lavater's essays on physiognomy were first published in German in 1772 and gained great popularity. These influential essays were translated into French and English. 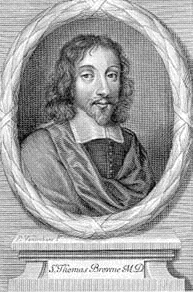 The principal sources from where Lavater found 'confirmation' of his ideas were from the English physician-philosopher Sir Thomas Browne (1605–1682), and the Italian Giambattista Della Porta (1535–1615). Browne in his Religio Medici (1643) discusses the possibility of the discernment of inner qualities from the outer appearance of the face, thus:

there is surely a Physiognomy, which those experienced and Master Mendicants observe....For there are mystically in our faces certain Characters that carry in them the motto of our Souls, wherein he that cannot read A.B.C. may read our natures. R.M. part 2:2

Late in his life, Browne affirmed his physiognomical beliefs, stating in Christian Morals (circa 1675):

Since the Brow speaks often true, since Eyes and Noses have Tongues, and the countenance proclaims the heart and inclinations; let observation so far instruct thee in Physiognomical lines....we often observe that Men do most act those Creatures, whose constitution, parts, and complexion do most predominate in their mixtures. This is a corner-stone in Physiognomy… there are therefore Provincial Faces, National Lips and Noses, which testify not only the Natures of those Countries, but of those which have them elsewhere.

Sir Thomas Browne is also credited with the first usage of the word caricature in the English language, whence much of the physiognomy movement's pseudo-learning attempted to entrench itself by illustrative means.

Della Porta's works are well represented in the Library of Sir Thomas Browne including Of Celestial Physiognomy, in which Porta argued that it was not the stars but a person's temperament that influences their facial appearance and character. In De humana physiognomia (1586), Porta used woodcuts of animals to illustrate human characteristics. Both Della Porta and Browne adhered to the 'doctrine of signatures'—that is, the belief that the physical structures of nature such as a plant's roots, stem, and flower, were indicative keys (or 'signatures') to their medicinal potentials. 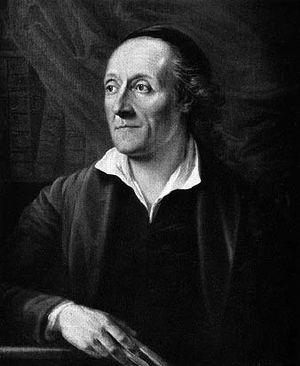 Lavater received mixed reactions from scientists, with some accepting his research and others criticizing it.[2] For example, the harshest critic was scientist Georg Christoph Lichtenberg, who said pathognomy, discovering the character by observing the behaviour, was more effective. Writer Hannah More complained to Horace Walpole, "In vain do we boast (...) that philosophy had broken down all the strongholds of prejudice, ignorance, and superstition; and yet, at this very time (...) Lavater's physiognomy books sell at fifteen guineas a set."[2][9]

The popularity of physiognomy grew throughout the 18th century and into the 19th century, and it was discussed seriously by academics, who saw a lot of potential in it.[2] Many European novelists used physiognomy in the descriptions of their characters.[2] notably Balzac, Chaucer[10] and portrait artists, such as Joseph Ducreux. A host of 19th-century English authors were influenced by the idea, notably evident in the detailed physiognomic descriptions of characters in the novels of Charles Dickens, Thomas Hardy, and Charlotte Brontë. In addition to Thomas Browne, other literary authors associated with Norwich who made physiognomical observations in their writings include Amelia Opie and George Borrow.

Physiognomy is a central, implicit assumption underlying the plot of Oscar Wilde's The Picture of Dorian Gray. In 19th-century American literature, physiognomy figures prominently in the short stories of Edgar Allan Poe.[11]

Phrenology, also considered a form of physiognomy, was created around 1800 by German physician Franz Joseph Gall and Johann Spurzheim, and was widely popular in the 19th century in Europe and the United States. In the U.S., physician James W. Redfield published his Comparative Physiognomy in 1852, illustrating with 330 engravings the "Resemblances between Men and Animals". He finds these in appearance and (often metaphorically) character, e.g. Germans to Lions, Negroes to Elephants and Fishes, Chinamen to Hogs, Yankees to Bears, Jews to Goats.[12]

During the late 19th century, English psychometrician Sir Francis Galton attempted to define physiognomic characteristics of health, disease, beauty, and criminality, via a method of composite photography.[13][14] Galton's process involved the photographic superimposition of two or more faces by multiple exposures. After averaging together photographs of violent criminals, he found that the composite appeared "more respectable" than any of the faces comprising it; this was likely due to the irregularities of the skin across the constituent images being averaged out in the final blend. With the advent of computer technology during the early 1990s, Galton's composite technique has been adopted and greatly improved using computer graphics software.[15]

In the late 19th century, it became associated with phrenology and consequently discredited and rejected.[1] Modern scientists now consider physiognomy a form of pseudoscience.[2]

A February 2009 article in NewScientist magazine reported that physiognomy is living a small revival, with research papers trying to find links between personality traits and facial traits.[1] Still no conclusive evidence exists for any clear link.[1]

Alternative theories have been proposed.[1] For example, the human brain tends to extrapolate emotions from facial expressions (e.g., blushing) and physiognomy, with its assumption of permanent characteristics, would only be an over-generalization of this skill.[1] Also, if one classifies a person as untrustworthy due to facial features, and treats them as such, that person eventually behaves in an untrustworthy way toward the person holding this belief (see self-fulfilling prophecy).[1]

Some evidence indicates people can detect male homosexuality by looking at facial characteristics[16] or at the pattern of whorls in the scalp,[17] though subsequent research has largely refuted the findings on hair whorl patterns.[18]

A physiognomist named Yoshito Mizuno was employed from 1936 to 1945 by the Imperial Japanese Naval Aeronautics Department, examining candidates for the Naval Air Corps, after—to their surprise—Admiral Yamamoto's staff discovered that he could predict with over 80% accuracy the qualifications of candidates to become successful pilots.[19]

In 2011, the South Korean news agency Yonhap published a physiognomical analysis of the current leader of North Korea, Kim Jong-Un.[20] 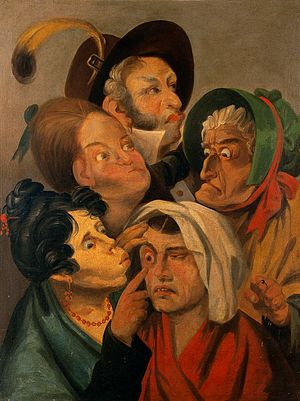 A bizarre physiognomical caricature with a figure pointing to another's sore eye. Oil painting by a follower of Louis-Léopold Boilly.