File:Piaggiobrandlogo2.png
Logo for the Piaggio brand

Founded by Rinaldo Piaggio in 1884, Piaggio initially produced locomotives and railway carriages. During World War I the company focused on producing aircraft.

During World War II the company produced bomber aircraft, but Piaggio emerged from the conflict with its Pontedera plant completely demolished by Allied bombing. Italy's crippled economy and the disastrous state of the roads did not assist in the redevelopment of the automobile markets. Enrico Piaggio, the son of Piaggio's founder Rinaldo Piaggio, decided to leave the aeronautical field in order to address Italy's urgent need for a modern and affordable mode of transportation. The idea was to design an inexpensive vehicle for the masses.

Aeronautical engineer Corradino D'Ascanio, responsible for the design and construction of the first modern helicopter by Agusta, was asked by Enrico Piaggio to create a simple, robust and affordable vehicle. The vehicle had to be easy to drive for both men and women, be able to carry a passenger, and not get its driver's clothes dirty. In 1946 Piaggio launched the Vespa scooter (Italian for "wasp") and within ten years over a million units had been produced. The Italian language gained a new word, "vespare", meaning to go somewhere on a Vespa.

With strong cash flow from the success of the Vespa, Piaggio developed other products, including the 1957 Vespa 400, a tiny passenger car.

In 1959, Piaggio came under the control of the Agnelli family, the owners of car maker Fiat SpA. In 1964 the two divisions, aeronautical and motorcycle, split to become two independent companies as a result of the wide ownership by Fiat in Italian industry.[clarification needed] The aeronautical division was named IAM Rinaldo Piaggio. The aircraft company Piaggio Aero is controlled by the family of Piero Ferrari, who still hold 10% of Ferrari.

In 1969 the motorcycle company purchased Gilera. 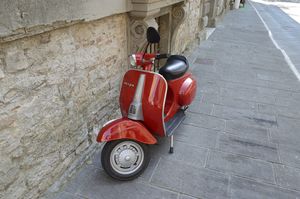 Vespa thrived, until 1992, when Giovanni Alberto Agnelli became CEO, but Agnelli was already suffering from cancer and died in 1997. In 1999 Morgan Grenfell Private Equity acquired Piaggio, but hopes for a quick sale were dashed by a failed joint venture in China.[clarification needed] In Italy, Piaggio invested 15 million euros ($19.4 million) in a new motorcycle but dropped it after building a prototype. By the end of 2002, the company had run up 577 million Euros in debt on revenues of 945 million Euros, and booked a loss of 129 million Euros.

Then came Roberto Colaninno, who said, "A lot of people told me I was crazy. Piaggio wasn't dying. It just needed to be treated better." Piaggio's financial position was in a bad shape, but its brand was still well known and its products were featured in many Hollywood films thanks to the Vespa ET4. In 1995, Colaninno had pulled off Europe's then largest-ever hostile takeover when he took control of Telecom Italia SpA. In September 2003, Piaggio's debt was reduced by the 100 million Euro cash investment made by Colaninno through his holding company Immsi SpA. There was also 150 million shares converted by creditor banks. Roberto Colaninio becomes the new chairman of Piaggio with Dr. Rocco Sabelli becoming the managing director. Dr. Rocco Sabelli redesigned the factory on Japanese principles, and changed it so that every Piaggio scooter could be made on any assembly line.

Unlike the turnaround recipe applied at U.S. auto makers, Mr. Colaninno did not fire a single worker – a move which helped seduce the company's sceptical unions. "Everyone in a company is part of the value chain," said Colaninno. All bonuses for blue-collar workers and management were based on the same criteria: profit margins and customer satisfaction. Air conditioning was installed in the factory for the first time, increasing productivity. He also gave the company's engineers, who had been idled by the company's financial crisis, deadlines for projects. They rolled out two world firsts in 2004: a gas-electric hybrid scooter and a sophisticated tilting scooter with two wheels in front and one in back to grip the road better.

One of Piaggio's problems Mr. Colaninno couldn't fix from the inside was its scale. Even though Piaggio was the European market leader, it was dwarfed by rivals Honda and Yamaha. A year after restoring Piaggio's health, Colaninno directed Piaggio's takeover of the Italian scooter and motorcycle manufacturer Aprilia, and with it the Aprilia-owned Moto Guzzi, storied Italian manufacturer of motorcycles.

In 2006, Piaggio floated on the Milan Stock Exchange, becoming a public company. 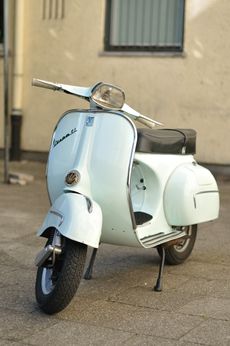 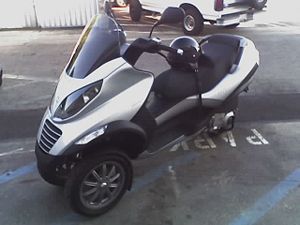 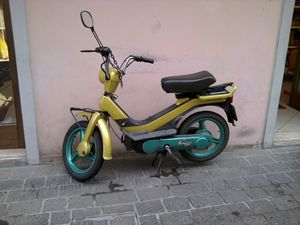 Piaggio/Vespa are also developing hybrid electric scooters. There are two models in the works, based on the popular Vespa LX 50 and the beefier Piaggio X8 125.[5]