Piazza Armerina (Gallo-Italic of Sicily: Ciazza; Sicilian: Chiazza) is an Italian comune in the province of Enna of the autonomous island region of Sicily.

The city of Piazza (as it was called before 1862) developed during the Norman domination in Sicily (11th century), when Lombards settled the central and eastern part of Sicily.

But the area had been inhabited since prehistoric times. The city flourished during Roman times, as shown by the notable mosaics at the patrician Villa Romana del Casale. 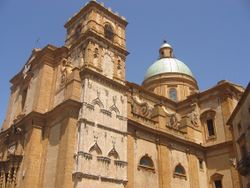 The town is famous chiefly for its Roman mosaics in the Villa Romana del Casale, about 3 kilometres (2 miles) to the southwest. It has a range of significant architecture dating from medieval through the 18th century. The discovery and excavation of the well-preserved, highly refined mosaics has helped attract tourists.

The medieval history of the city is manifest in some of its houses, which show Norman or Gothic architecture. The main landmarks include a range of architectural styles:

Outside the city is the ancient church of the Priorato di Sant'Andrea (1096), founded by Count Simon of Butera, a nephew of Roger I of Sicily. It has important medieval frescoes.

Piazza Armerina holds an annual Palio dei Normanni, a re-enactment in costume of the entrance of the Norman Count Roger I to the city. It takes place on 12–14 August.

See also: Lombards of Sicily and Gallo-Italic of Sicily

Piazza Armerina is one of the so-called "Lombardic" communes of Sicily, as its dialect differs notably from that of the neighbouring region. This is due to the destruction of the old Piazza by king William I of Sicily, and the subsequent repopulation by William II (according to other scholars, during the slightly later age of Frederick II) with colonists coming from "Lombard" regions of northern Italy, especially from Monferrato and Piacenza.